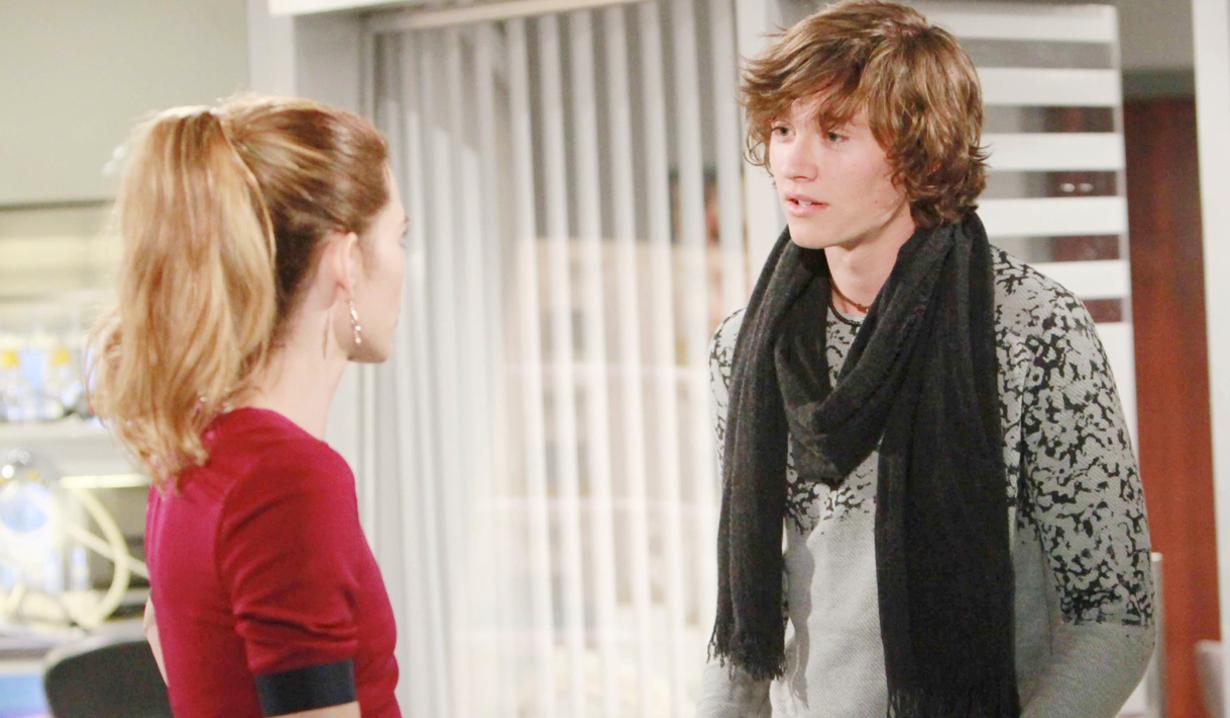 At Crimson Lights, Ashley watches Jack present a thrilled woman with a check from the benefit. After, Jack tells Ashley that Lauren is reaching out to potential investors. Ash responds, “But not you.” That’s never stopped Jack. Ash is still opposed to him going after Lauren’s business.

In Lauren’s house, Gloria confronts her about Fenmore’s being in trouble. She wonders if Michael knows. Lauren tries to downplay the situation, and explains she didn’t want to burden Michael with the news. Gloria will keep the secret and is ready to go to work on this immediately. Lauren wonders if she’s trying to blackmail her into giving her a job. Gloria demurs, “Of course not.” The doorbell rings – it’s Jack, who is surprised to see Gloria. He speaks to Lauren a possible investment in Fenmore’s. Lauren tells him that Phyllis works for her now; she’s certain he won’t want to go into business with his ex and will withdraw his offer. Jack says she couldn’t be more wrong. Lauren tightly informs him she won’t let anyone liquidate her father’s legacy; she will hold out for the right kind of investor. After she shows him out, Gloria applauds. Lauren shouts at her to knock it off. Glo warns Jack won’t give up – she’s been down in the mud with him plenty of time and it ain’t pretty! Lauren states that she’s handled the situation.

At home, Victoria rants at Reed for disappearing from school. Billy appears as Reed explains that Billy knew where he was and gave him a ride home from the music store. Once alone, Billy thinks Victoria should give Reed a break. They debate. Billy thinks Victoria is seeing his shortcomings in Reed, and feels she’s freaked out by their near-kiss on New Year’s Eve. Vikki denies it. Billy promises to alert her the next time Reed calls him and leaves. Later, Victoria is on the phone when Reed cranks up his electric guitar. She hollers up at him. A fuse blows and Reed urges her to call Billy. She doesn’t want to. Reed says they could go to Grandpa’s. Vikki looks for her phone.

In the hospital waiting area, Lily grouses to Neil about Hilary getting lucky with Devon’s memory loss. Neil says it’s not the time for him to find out what happened, and urges her to go back to work. In Devon’s room, he asks Hilary what’s going on with her and Lily; it seems like things are worse than usual. Hil assures him everything is good. Devon worries about the show. Hil says she’ll handle it. She says they must not let anything come between them ever. Devon states nothing ever could. Hilary will make sure of it. After, Neil warns Hilary she’s not going to get away with any of this; Devon is going to get his memory back. Hilary snaps that he and Lily are so self-righteous; for all they know, Devon wasn’t going to end their marriage. Neil calls her deluded and warns she’s living on borrowed time. Hilary intends to stay Devon’s wife until he decides otherwise. She rejoins Devon and assures him her priority right now is getting him home. It will take time, but she’ll be there every step of the way. Devon is pleased to hear he’s off the critical list. He can’t understand why he was driving like a maniac far from home. Hilary kisses him. “Ssh. Just rest.”

At Jabot, Ashley chats with Billy, who tells her about Reed showing up. He admits he’s happy to have him back, but says Victoria’s kind of having a hard time with it. Ash wants him to have coffee with her in the Jabot offices. She assures him Jack is out and Phyllis has moved on. Ash gets a text and Billy ribs her when she admits she has a date. Talk turns to Victoria. Billy says she’s clear about where she stands; far away from him. Billy’s phone rings. Later, Jack arrives and tells Ashley Lauren turned him down. Ash exits. Jack gets a call from Gloria, who offers to help him get Fenmore’s. “My daughter-in-law doesn’t always know what’s best for her.”

At the Club, Lily updates Mariah on Devon’s condition and informs her he has no recollection of anything leading up to the accident. Mariah thinks Hilary dodged a bullet. Lily replies, “Not for long.” Neil joins them. Mariah feels responsible for what happened to Devon, but they reassure her. Neil says Hilary will get what’s coming to her when the time’s right.

Ashley is surprised to find Phyllis with Ravi in her old office at Jabot.

Jack asks Gloria, “What’s in all this for you?” Glo replies, “A small role in the company.” Jack asks, “How small?”

Lauren tells Michael, “I haven’t been honest with you.”