Thursday January 5, 2017: Hilary and Lily argue after Devon’s revelation, Sharon gets frustrated with a line of questioning, and Phyllis and Nick open up over a beer. 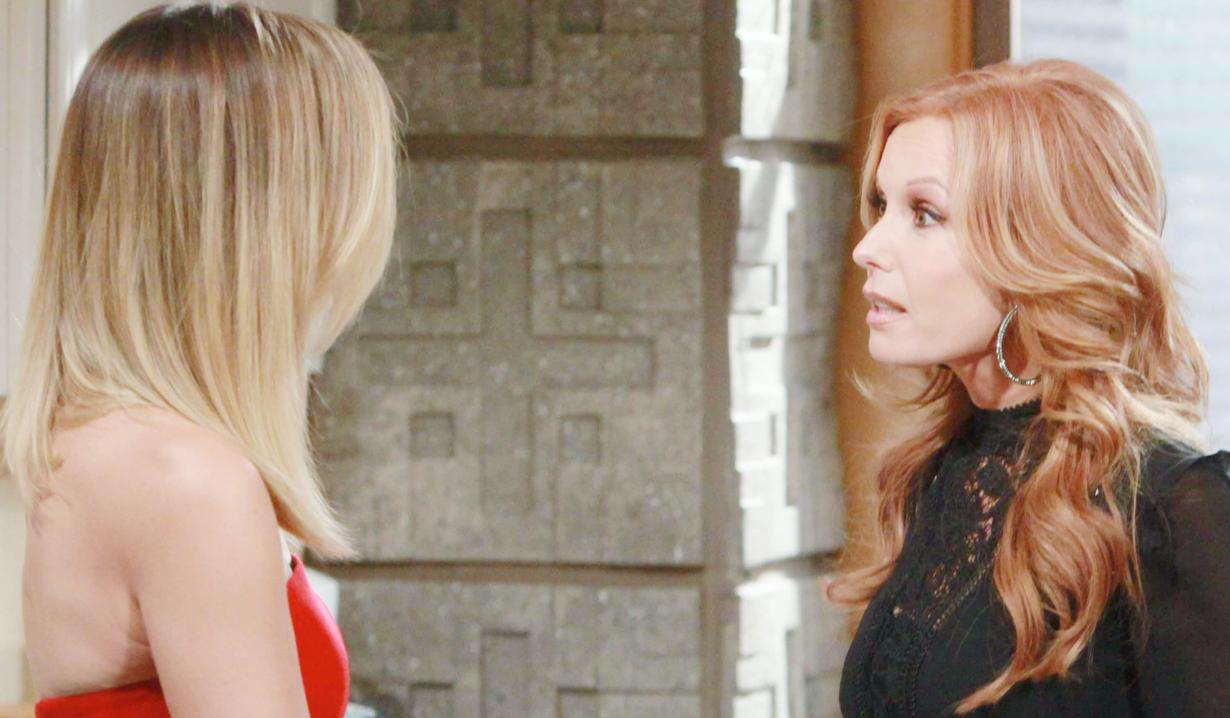 At Crimson Lights, Hilary frets to Neil about having left the hospital. She knows she looks terrible and cries at the prospect of Devon not waking up. Neil wants to accompany her back to the hospital and she snaps at him, but then apologizes.

In the hospital, Stitch and the nurse discuss how in love Hilary is with her husband and Devon moves. He begins to open his eyes and Stitch coaches him to wake up. Devon is told he was in a bad car accident. Hilary and Neil arrive and get updated by Stitch in the hall. Hilary flashes to Devon calling her evil and heartless and worries. Neil phones Lily at the Club and tells her the good news.

At Lauren’s house, she and Phyllis talk about Devon’s accident. Gloria passes through the room on her way to ‘where she’s most needed’. Lauren grumbles that she was wearing her earrings. Talk turns to business. Lauren goes over a list of potential investors with Phyllis. Lauren reveals that she hasn’t yet told Michael how bad things are with Fenmore’s. She doesn’t want him to know it’s her fault. Phyllis assures her he wouldn’t think that.

In Chelsea’s studio, Nick teases her about a design before asking if they’re okay after the kiss. She reassures him they’re fine and will stay friends. They hug it out as Sharon arrives. Nick and Sharon get into a conversation about Faith and she gets her back up when he worries about Dylan’s absence. Sharon snaps that her marriage is fine and Dylan will be back.

Kevin and Chloe are discussing Devon’s accident at the coffee house when Gloria joins them. Noting Gloria’s attire, Kevin asks where she’s headed. Glo announces she’s going to the design studio to brighten Chelsea’s day by going back to work. Chloe chokes on her coffee. Kevin reveals that Chloe works there. Gloria is surprised considering that Chloe tried to kill Chelsea’s husband. Chloe says Gloria’s missed a lot and her position is gone; Sharon has it now. Gloria argues that she has vision. Chloe thinks she’ll be happier elsewhere. Once alone, Glo tells Kevin she could supervise Sharon. Kevin urges her to go see the world. Glo reveals Jeffrey left her dead broke. She needs a job and vows to knock down doors and take names.

Lily arrives at the hospital and worries that Hilary’s presence will upset Devon. Hilary loves him and calls Lily out for her spiteful behavior. Stitch appears. Devon’s asked for Hilary. She goes to his bedside. Devon doesn’t remember the gala at all. He is grateful Hilary wasn’t in the car. She tells him he wanted to take the car for a spin, and she waited for him at home. Devon asks forgiveness for putting her through this. In the hall, Neil and Lily bicker about Devon and Hilary’s relationship. Neil feels they need to focus on him getting well. They go in to see Devon, who is sorry he made them all worry. Hilary reveals that Devon doesn’t remember the benefit. Outside the room, Lily and Hilary argue about not telling Devon the truth until Neil intervenes. Hilary says the truth is that she loves Devon. Stitch joins them. It’s too early to know if Devon’s memory will come back and he warns them not to tell Devon anything that could upset him and compromise his recovery.

At The Underground, Nick and Phyllis chat about Summer being stuck in Belize. Phyllis says she walked away from Jack and is working for Lauren. Nick feels she’s a good friend. Talk turns to him and Chelsea being just friends, and Phyllis coughs, “Liar.” Nick shares what happened between them. Phyllis brings up their history. Nick recalls that they fell in love hard. Phyllis tells him to be vigilant because loneliness can creep up on you.

Chloe enters the design studio and informs Chelsea that Gloria dumped her father, Jeffrey, and wants her job back. Sharon pipes up, “Isn’t that my job?” They assure Sharon her job is safe. Chelsea asks if she and Dylan are okay. Sharon insists they’re fine and that Dylan is focusing on work.

Gloria returns to Lauren’s place and offers to come to work at Fenmore’s. Lauren sweetly turns her down. When Lauren takes a call, Glo peeks at her laptop and realizes what’s going on with the company.

Gloria asks Lauren, “How long has this been going on? Does anyone else know, like for instance, your husband?”

Lily tells Mariah that Devon is happy and has no recollection of anything leading up to the accident.

Neil says to Hilary, “Don’t think that you’re going to get away with any of this.”