Wednesday January 4, 2017: Victoria worries about the future, Jack is ready to go on the attack, and Paul has second thoughts after a visit from Nikki. 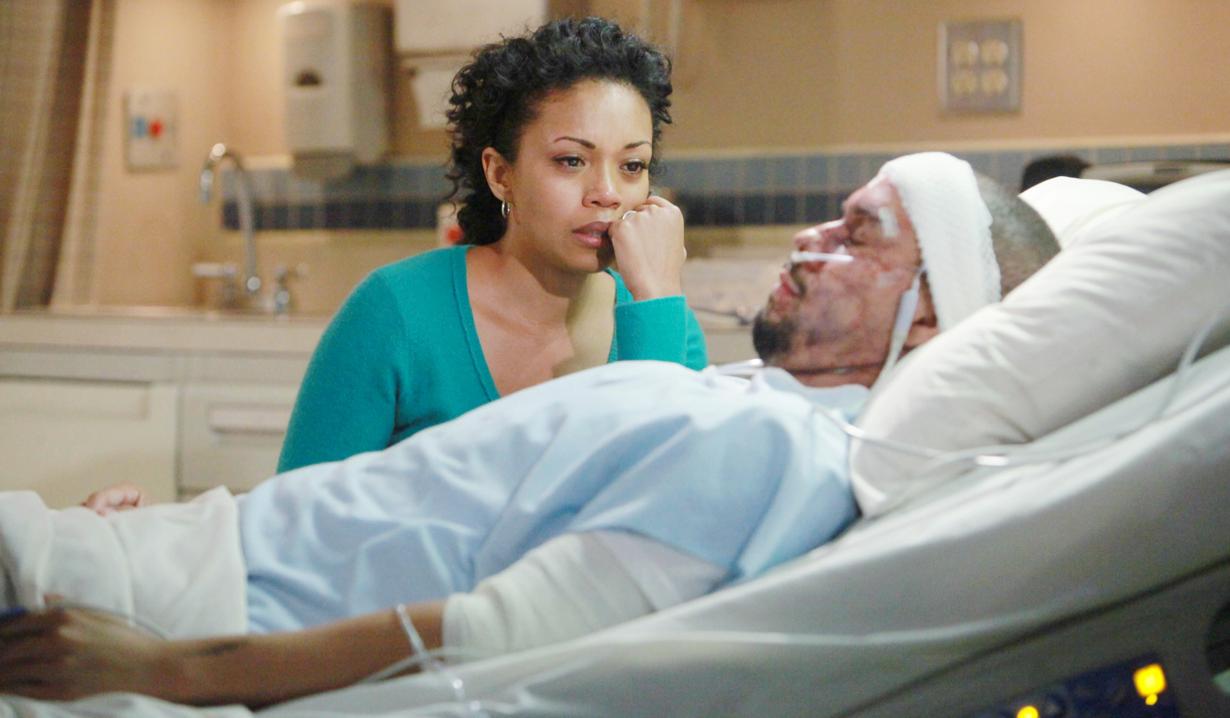 At the hospital, Stitch wakes up Hilary and tells her Devon is critical but stable – it wasn’t unusual for a patient in his condition to have cardiac arrest. He suggests she go home to shower and rest, but she won’t leave the hospital without Devon. She blurts that Devon wouldn’t be there if not for her. Stitch says it was an accident, but is unable to convince her to go. Hil wants to see Devon…now. At Devon’s bedside, she tells her husband she’ll stand by him; this is where she belongs and has always belonged. Hil recalls how he believed in her and loved her even when she didn’t deserve it. She wonders if he’ll wake up and walk away, and tells him she won’t leave him there alone. Stitch takes another shot at convincing her to go home, and she gives in.

Billy and Jack eyeball each other in the Jabot parking lot and head in to the elevator. Jack promises Jabot will crush Brash & Sassy. “You’re going to implode, like you always do.” Billy sneers that he’ll take the stairs. In Jack’s office, Abby surprises Ashley with coffee and teases her about Ravi. Ashley laughs off his ‘New Year’s Eve moment’ but will talk to him. They discuss Abby’s fresh start. Ash is proud of her grace and strength. Jack enters and notes he’s also moving on – Phyllis quit. Ash is floored and wonders if it’s too early for champagne. Abby goes. Ash and Jack touch base on Devon’s condition before Jack announces that Fenmore’s is vulnerable due to low holiday sales. “It’s time to make our move.” Ashley isn’t thrilled and questions if it’s the right time to take this on. They debate. Ravi arrives. Jack leaves. Ash brings up New Year’s and Ravi stammers out an apology and hands her a letter of resignation. She rips it up; the kiss wasn’t a big deal. Ravi is blown away. She has to go to a meeting. He tells her to have fun and then shakes his head at his ineptitude. Down at Brash & Sassy, Billy updates Victoria on his earlier run-in with Jack. She reports that she spoke to JT and Reed is staying; he is her ‘problem’ until the summer. Billy learns JT was having trouble with the teen, and reassures Victoria, who is nervous having her teenage son living with her. Billy offers to help out. Reed appears. He’s all set for school. Victoria is surprised to hear he no longer likes baseball, and seems glum as he bonds with Billy over music. After Reed goes, Victoria laments not knowing her son. Billy thinks he’s lucky she wants to spend time with him. Vikki says, “Let the adventure begin.”

In the park, Lauren panics over news about Fenmore’s over the phone. Phyllis arrives. Lauren, stressed, asks how soon she can get her platform up and running. Phyllis realizes things are bad. Lauren frets. Phyllis urges her to snap out of the fear and doubt so they can do what needs to be done.

At the station, Nikki questions Paul regarding Dylan’s case. Paul informs her she won’t be able to talk to him while he’s on this assignment. Nikki realizes the case is dangerous and also that he volunteered for it. Paul soothes that this job will give him much-needed time. After, Paul calls Christine in and is clearly agitated about Dylan and the case. Paul worries about the risks – he hopes he didn’t make the wrong decision. Chris reminds him he was confident Dylan was the man for the job. Paul admits he’s having second thoughts. Chris reassures him.

In the Club, Phyllis pitches her online concept for Fenmore’s to an enthusiastic Lauren. Phyllis looks forward to showing what she can do and helping her friend take her company to the top. Lauren assures Phyllis she can finance her ideas. Jack arrives. Nikki calls him over to the bar to talk about Devon. He grimaces when she thanks him for tearing up Brash & Sassy’s eviction notice. Jack warns there will be no more breaks. Nikki thinks they’ll give as good as they get. They notice Phyllis, and Nikki sniffs about all that woman put him through. Jack assures her he’s a new man at the top of his game. Across the room, Lauren notices Phyllis trying to ignore Jack’s presence. Phyllis feels her efforts to save the marriage made things worse. She is happy to be getting her dignity back.

At the park, Paul receives a coded text and informs Chris that Dylan has arrived in Miami.

Gloria announces to Kevin and Chloe that she’s going to go by the design studio and brighten Chelsea’s day by going back to work. Kevin makes a face and Chloe nearly chokes on her coffee.

As Devon begins to open his eyes, Stitch coaches, “Can you hear me? Come on pal, you can do this.”