Wednesday December 14, 2016: Hilary makes a move to control her future, Dylan opens up to Sharon about Nikki, and Lily gives Devon advice. 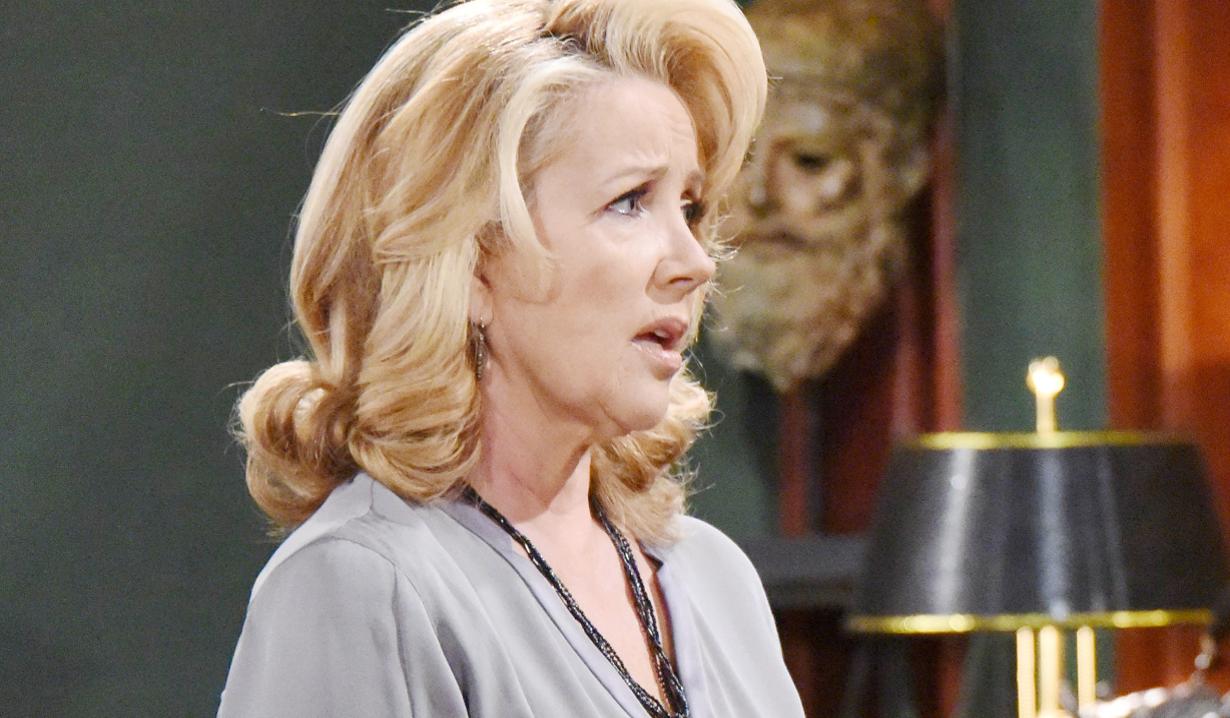 At Sharon’s place, she tries to help Mariah cover up her black eye. Dylan and Faith enter. When Mariah calls herself an idiot who tripped in front of millions, Dylan falls on his face, which makes Mariah smile. Faith and Mariah go upstairs and Sharon asks Dylan to take Faith to the main house for her riding lesson. Dylan begs off for work. Faith screams as she rushes downstairs – Mariah’s trending!

In the Club, Dylan and Lily discuss the situation at GC Buzz. Lily would take a laugh over Hilary’s nastiness – she’s not an option. Devon shares she’s barely speaking to him. Lily assures him she brought this on herself. Devon laments having no host. Lily advises him not to rehire Hilary and reminds him this is about the kind of energy he’s putting out into the world.

Devon arrives at Sharon’s place as she and Faith are heading out. Devon remarks on Mariah’s shiner and they discuss the fan feedback. He asks her to come back as host – no more live shows or red carpets. Mariah declines. Devon is airing reruns and really needs her. She agrees to come back until he finds a replacement and then be a segment producer with a bump in pay.

Related: Find out if Y&R and other soaps are airing during the holidays

At the park, Jack runs into Hilary, who complains about Devon firing her. Jack commiserates about difficult marriage/work situations. Hil goes on about Mariah embarrassing Devon and the show – he should have come crawling back to her by now. She vents to Jack about how judgmental her husband has been. Jack suggests she work for someone else. Hil could see herself on another show. She talks about how she’s found herself since coming to town – in a weird way GC Buzz did that – it just felt so right. She enjoyed having the support from millions. Jack thought she was a natural. Hilary demurs – he’s a friend. Jack suggests he bring in someone unbiased to take a look at her.

Victor and Nikki enter the ranch, arms loaded with bags from shopping in New York. They canoodle. The doorbell rings – it’s Nick looking for a sitter for Christian. They talk about him handing The Underground off to Noah, but being ready to return to work. Victor suggests Nick return to Newman Enterprises. They discuss Faith’s beautiful singing voice before Vic reiterates his offer. Nick reminds him they don’t work well together. Nikki agrees. Victor asks what if he was to step back and no longer run Newman? Nick and Nikki are skeptical. Vic insists he might do it. Faith arrives with her mother. Awkwardness ensues. Nikki waits impatiently as Sharon and Nick discuss Faith’s Christmas pageant, and then shows her out. At the door, they bicker about Dylan. Sharon is surprised to learn he didn’t visit Nikki the other day. Later, Faith sings ‘Jingle Bells’ as Nikki plays piano and Nick and Victor enjoy along with them. After, Nikki and Nick watch Victor ‘turn to mush’ with his granddaughter by the tree. He tells her about not getting gifts when he was a child in the orphanage and talks about the one Christmas he spent with his mother. Nikki notes the change in her husband, and wonders to Nick if he may be serious about leaving the office.

News: Y&R casting the role of a photographer named ‘Ryder’

At the Club, Hilary meets with Jack’s agent friend, Barry Strickland, who thinks she has great onscreen presence. Lily notices. Hilary tells Barry she left GC Buzz because she wanted to make it on her own. He thinks she’ll have lots of options.

At GC Buzz, Mariah steps on the red carpet and relives her humiliation. She tells Devon she can’t host the show. Devon tries to talk her around. Hilary arrives. She and Mariah have an exchange before Devon takes Hil aside. Mariah flashes to Hil smirking after her fall. Nearby, Devon and Hilary bicker about her tenure. Devon wants to compromise if she agrees to change. Hilary feels he’s still trying to control her. Devon gets a call from Barry, who says he’s Hilary’s agent. He wants clarification that she’s released from the show since they have offers flying in.

In the park café, Sharon updates Dylan about her trip to the ranch and questions him about not seeing Nikki the other day. Dylan explains Nick was there celebrating and he couldn’t knock on the door. Sharon reassures him of Nikki’s love. Dylan says he’s not a Newman, and that makes all the difference. Sharon reminds him he’s not alone. He knows he’s lucky, and they’ll move on together.

At Jabot, Lily is going over foundation business with Jack. They reflect on the pros and cons of mixing family and business.

At home, Sharon reassures Dylan that Faith is not just her daughter with Nick, but their daughter too. They hug.

Ashley spills coffee all over a woman in the Club.

At Brash & Sassy, Cane holds an eviction notice and says, “Jack’s the one who signed the lease, he can’t just rip it up on a whim.” Victoria replies, “It’s not a whim, it was cold, it was calculated.”

Billy angrily tells Jack, “You’re going to pretend this has anything to do with business; it doesn’t. I’m not letting you get away with it.”