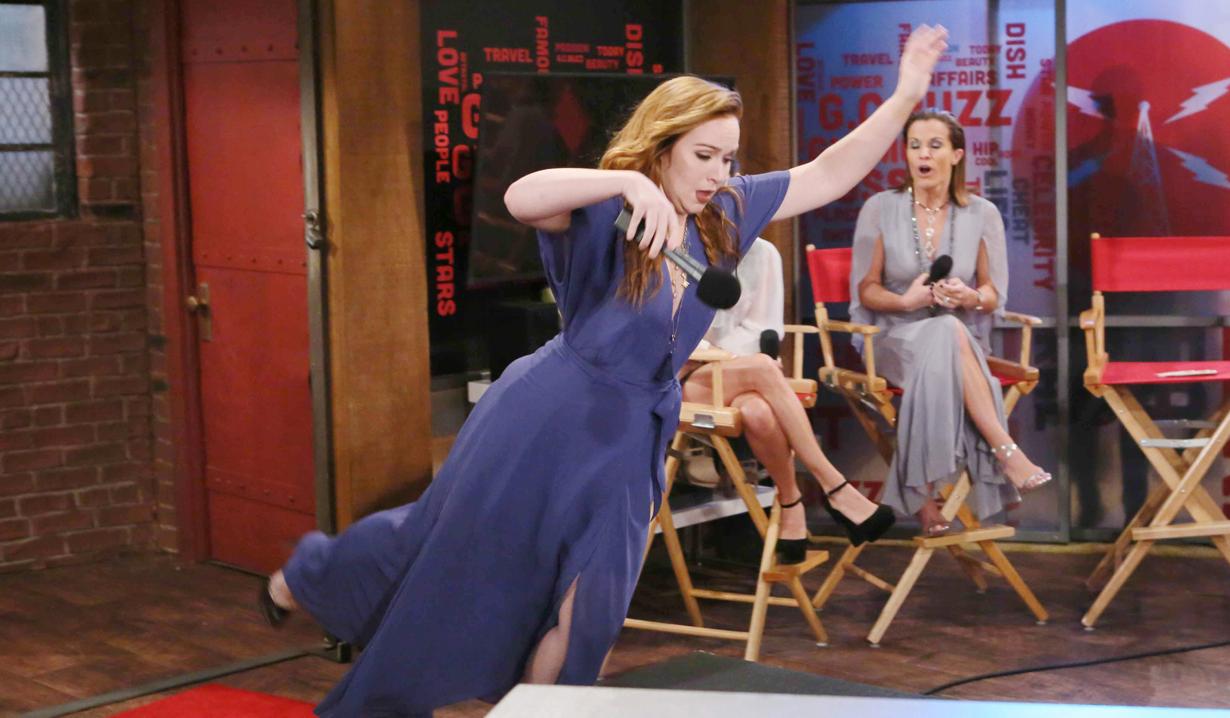 At the tackhouse, Faith worries to her dad about Mariah’s fall. Nick reassures her Mariah’s tough.

In Crimson Lights, Summer wonders if Mariah fell on purpose. Kevin asks why anyone would do that on purpose.

At GC Buzz, Chloe halts Sharon from helping Mariah, who gets up on her own, and signs off in a shaken voice. Sharon, Chloe, Chelsea, and Devon check in and reassure her. Hilary says it looked really bad. She feels Mariah was forced into hosting before she was ready and shouldn’t be embarrassed. Devon is proud of Mariah for finishing like a pro. Hilary picks up the broken heel and notes Mariah won’t be able to afford the $1000 replacement fee since she’ll be back getting coffee. Mariah tells her she wants this so bad, she can have it. Sharon wants to take Mariah to the hospital, but she only wants to go home. Faith calls and Sharon tells her Mariah is okay. After they leave, Devon takes Hilary aside to talk, as Chelsea complains to Chloe that her spring line is now a punch line.

At home, Cane greets Lily enthusiastically as she comes in. She notices he’s worked out again after his therapy session. Cane confesses Jessie’s hands feel like magic. With crossed arms, Lily listens as he elaborates, and then declares he’s a jerk. Cane says she’s doing deep muscle stimulation next time. Lily abruptly leaves the room to shower. When she returns, Lily orders him to put down his work – it’s time for his treatment. She’s in nothing but a physician’s coat and they proceed to ‘play doctor’. Lily partially undresses Cane, reveals her sexy lingerie, and they make love on the sofa. Cane calls her a miracle worker. Lily thinks he should see Jessie more – whatever she’s doing she should keep it up.

Abby joins Summer and Kevin at Crimson Lights and wonders how Mariah ended up hosting GC Buzz. She and Summer read the internet trolls’ comments. After, Summer shows Kevin a viral clip of Mariah’s face plant. Chloe appears and tries to convince Kevin that Mariah is fine. On the patio, Summer and Abby laugh at the clip and worry about whether they’re bad people. They decide they need to kick back and have some fun and head out for a spa day. Inside, Kevin apologizes to Chloe for not thinking about her. Chloe laments what the bad press means for her. Kevin is there for her.

At Sharon’s place, she reassures Mariah, who is obsessing over the viral clip. Sharon advises her not to give Hilary the satisfaction of getting down on herself. Mariah realizes her face is swollen up and freaks out. Faith arrives and tells Mariah she was unforgettable. Mariah steals a hug. Faith has cookies, and the trio mocks Nick’s decorating skills. Faith wants to stay the night and heads upstairs. Sharon reassures Mariah some more, but Mariah tells her to face facts – her daughter is a meme. Sharon works to make her feel better. Faith reappears and wonders if something made Mariah trip – maybe it wasn’t her fault. Mariah looks thoughtful. She flashes to the fall and recalls Hilary standing off to the side smirking.

News: Y&R casting the role of a photographer named ‘Ryder’

Nick arrives at Chelsea 2.0 with Christian and discusses the GC Buzz incident with Chelsea, who also feels bad for Mariah. Chelsea laments the segment being a joke on social media. Nick reminds her she’s not a quitter and there is no such thing as bad publicity. Chelsea thanks him for making her feel better. Nick is all about optimism and focusing on his blessings. He credits her for being there for him. They joke about his new attitude, hug, and Nick goes.

At GC Buzz, Hilary tells Devon she forgives him for trying to replace her with Mariah. She assures him she learned that he is the money, and she’s the talent. Hil goes on about the cringe-worthy show. Devon doesn’t think they’re on the same page. Hil says if he admits he was wrong, just maybe she’ll come back. Devon concedes Mariah wasn’t ready for a live show and he pushed it. Devon gets a phone alert and realizes Mariah is trending. Hilary starts reading – the comments are all raving about Mariah. She can’t believe this is happening. Devon decides maybe he mad the right decision after all. “Go Mariah!”

Hilary says to someone seated across from her at the Club, “I’m just so thrilled that you were able to meet with me on such short notice.” Lily walks in.

Mariah tells Devon, “I can’t do this. I can’t host the show, Devon.”

Faith sings ‘Jingle Bells’ as Nikki plays the piano and Nick and Victor join in.

With a Glut of Stand-up Comedy One-Offs, It May Be Time to Rethink Emmys’ Specials Category (Column)