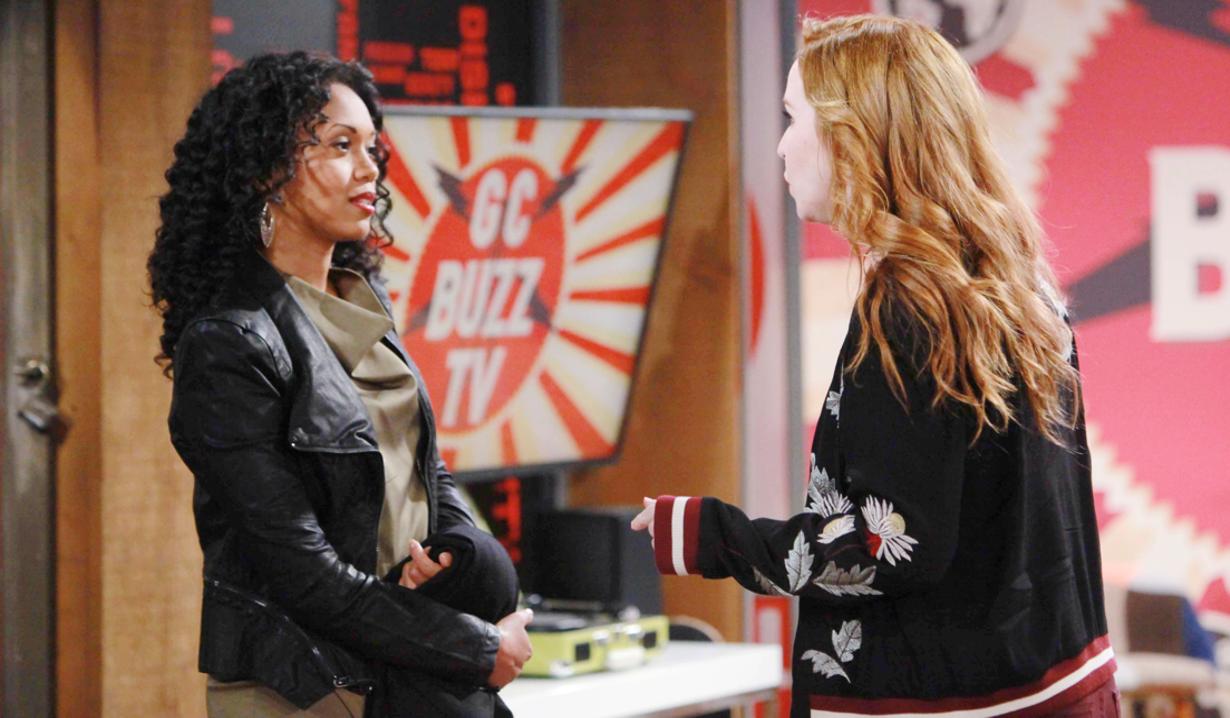 At Chelsea 2.0, she, Chloe and Sharon prepare the line to go live on GC Buzz. Chelsea gushes about how great it is that Hilary got involved to give them publicity. Sharon makes a crack about her inability to tell the truth. Chelsea wonders if they have a problem. Chloe jumps in to say everything will be fine.

In the GC Buzz studio, Devon is pleased with Mariah’s test run on camera. Hilary’s nose is out of joint over Mariah saying her tagline. Bickering ensues until Hilary reveals that the Chelsea 2.0 segment will be live. Devon and Mariah are taken aback. Hilary warns Mariah will have to model in heels and tells Devon this will be a disaster. Devon asks Hil to stop undermining Mariah. Hilary feels Mariah should walk away before she gets laughed out of town. She appeals to Devon to let her do it, but he won’t budge. Sharon arrives ahead of Chloe and Chelsea and learns Mariah is hosting the show. She notes Hilary staring daggers across the room. Chelsea and Chloe arrive and get up to speed. Mariah assures them she’s fine with modeling. Sharon gives her an outfit featuring towering spiked heels. When no one’s looking, Hilary picks up one of the heels and is about to sabotage it, but Sharon spots her. They bicker about Dylan’s interview. Sharon tells her Mariah will make the GC Buzz audience forget all about her.

Summer visits Nick at the tackhouse. The sink is piled with dirty dishes, Christian’s crying in the monitor, and Faith has a book report due tomorrow but has only read half the book. Summer offers help but Nick insists he can handle this. Talk turns to Phyllis. Summer thinks something happened with Jack; she’s worried about her. She notes all three of them are sort of adrift. Nick is hopeful. Summer thinks her mom could use a pep talk from him. Faith reappears. She and Summer make fun of Nick’s cookies, and then he leaves.

Michael finds Phyllis crying in the park. She tells him she and Jack are done. Michael tries to be reassuring, but Phyllis insists Jack’s goodbye kiss was final. Talk turns to Lauren. Michael worries she’s not telling him everything that’s going on at work, but he feels a good Christmas season will set things right. Phyllis has a plan to help, but doesn’t go into specifics.

At Jabot, Ashley wants to use Phyllis’ office space. Jack doesn’t think she’ll be around much longer; he made it clear he was moving on. They look at the JabotGo app on the laptop and Ash mentions hiring someone to help her with it. Jack mentions another venture, but Ashley’s new hire, Ravi (Abhi Sinha), arrives. He baffles them with programmer talk. Jack asks what he needs to get started, but Ravi is busy checking out Ashley. After an awkward exit, Jack cracks that Ravi might be a little too motivated. Later, Nick finds Phyllis in her tiny office. She learns Summer sent him on a pep talk mission. They discuss the end of her relationship with Jack. He doesn’t think this is the best place for her. Phyllis says, “Way ahead of ya’.” She shows him her online expansion plans for Fenmore’s. Nick likes it, and likes her enthusiasm more. Phyllis thinks it’s her ticket out of that shoebox. In Jack’s office, Ashley laughs at the idea of Ravi having a crush on her. Jack brings up his new venture – Fenmore’s. Ash assumes he means a partnership, but he’s talking about a takeover. Ashley worries that Lauren’s their friend, but she sees the upside. Phyllis passes the door and hears Jack say Fenmore’s is ripe for the taking, but they have to move fast.

Kevin and Michael toast to his anniversary at Crimson Lights. Michael brings up Chloe and Kevin relays the story about her closet – the way she freaked out surprised him. He loves coming home to Chloe and Bella though. Michael’s happy for them. He passes Summer as he leaves. Summer joins Kevin and asks how Mariah’s handling him living with Chloe. Kevin assures her they’re great friends; nothing will change that. He puts on GC Buzz.

At GC Buzz, everyone assures Mariah she looks fantastic. Devon announces they’re live in five minutes as Mariah straps on the daunting shoes. The show goes live and Chelsea awkwardly talks about what spring means to her before the modeling kicks off.

In Nick’s living room, he tells Faith to turn off the TV, but she yells that Mariah’s hosting – she’s a star!

On GC Buzz, it’s time for Mariah to model her dress. Hilary looks on, and Sharon gasps as Mariah trips and falls on her face.

Lily undresses for Cane. “No more work, it’s time for your treatment.”

Chloe stops Sharon from going to Mariah, “Hold on, hold on.” Sharon argues, “But she could be hurt.” Chloe replies, “Not while they’re still rolling, let’s see what she does.”

Hilary tells Devon, “If you admit that you were wrong, just maybe I’ll come back.”