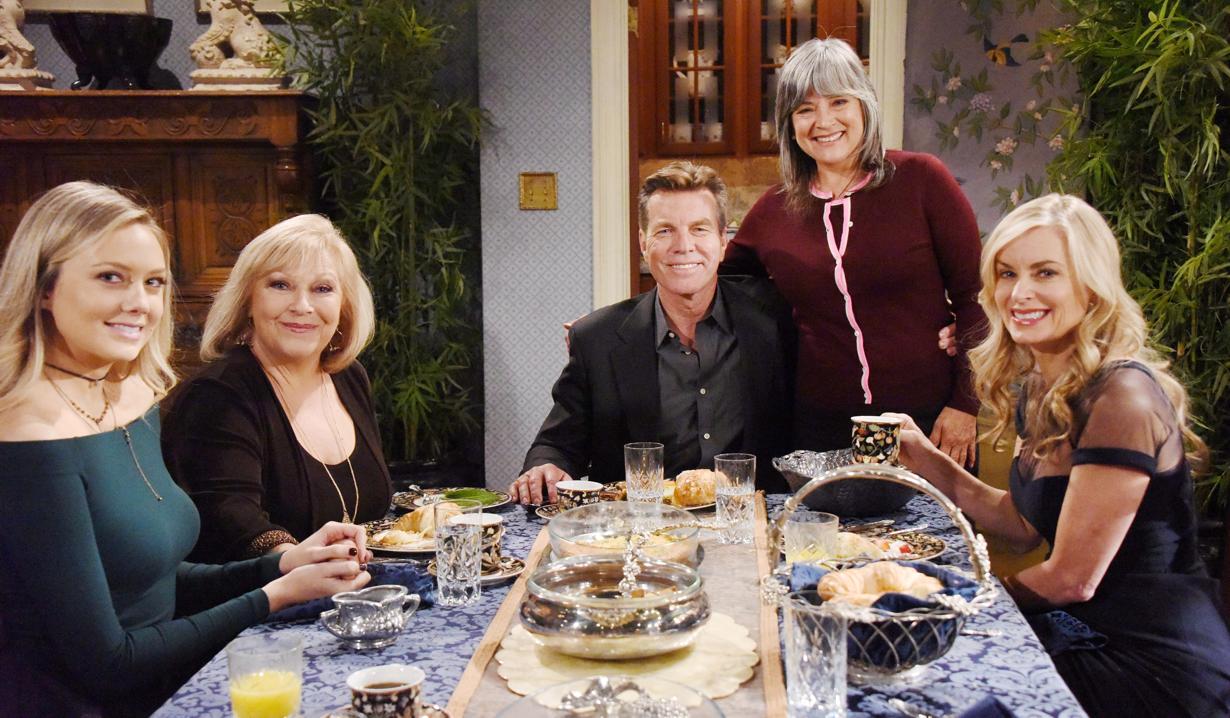 As Jack comes downstairs to get the morning paper he hears voices in the dining room. Mrs. Martinez is serving Abby and Ashley breakfast. Traci appears. She got in late last night. Once they’re seated, Jack wants to know what’s going on. Ash admits they’re worried. Jack assures them he’s fine and is even going back to the foundation. As the girls press him to sit, Jack flashes to a past Abbott family breakfast when John was still alive. As they eat, Jack is teased about the need to decorate the house for Christmas. Traci decides she and Mrs. Martinez will do it. They reflect on the breakfast tradition. Jack explains to Abby that John always made sure to be there in the morning. Traci mentions Billy and Jack wonders why she had to bring him up? He gets upset when Traci says she invited Billy for breakfast. They argue. Traci loses her patience with Jack, who refuses to budge where Billy’s concerned. She hollers that Dad would expect him to find a way to forgive Billy and make him feel a part of the family again! In the living room, they continue the discussion. Jack insists there won’t be any heartfelt reconciliations under this roof.

At the ranch, Victor and Nikki discuss the judge’s ruling on visitation rights being in the papers. Nikki grouches about the lack of privacy and understanding about what they’ve gone through with Christian. She agrees with Nick raising his son, but Dylan is crushed. Victor understands it’s difficult for her. Nikki thanks him for acknowledging it. She never meant to make Nick feel she was choosing one son over another.

At Sharon’s house, Dylan finds her getting Christmas decorations out. She’s only doing it for Faith; she is deflated after the judge’s ruling cut them out of Christian’s life. Dylan muses that they have to find a way to move forward. He remarks on how supportive Nikki’s been it meant a lot to him. Sharon and Dylan express their love and kiss. After, Dylan finds Sully’s tree ornament and Sharon stops him from throwing it away. He tells her they have to let go, and decides to go see Nikki. He pockets a small photo of Christian before leaving. Later, Sharon pockets a photo of the boy too.

Nick arrives at Victoria’s house with Christian and a pot of poinsettias. She’s relieved they’re not from Travis. Talk turns to the judge’s ruling. Vikki thinks it was right; Sharon and Dylan aren’t Christian’s parents. Nick complains about Nikki making him feel selfish – how could she treat him that way? Vikki thinks she was caught in the middle. Nick felt like the bad guy.

In the Club dining room, Billy assures Jill she can go on her business trip; all is well at Brash & Sassy. She brings up Victoria. Billy says her personal life is her business, but they’re fine. Jill wonders about him and Jack. Billy feels he won’t forgive him for what he did, though Traci invited him for breakfast. Jill urges him to go. Billy explains that he feels he doesn’t belong. Jill hisses that he is John Abbott’s son; he and Jack will always share that bond.

Nick arrives at the ranch, where Nikki wants to make him understand where she’s been coming from. Nick hears her out and accepts her apology. Nikki tears up; she just wanted to help Dylan, who’s been through so much, and be a mother to him. Nick hugs her. Victor leaves and Nick admits to Nikki that the single parent thing is overwhelming. Nikki reassures him; he’s not to blame for the allergy incident and things will fall into place. Outside, Dylan arrives and sees Nikki and Nick with Christian through the glass. He walks away.

In Chancellor Park, Victoria tells Billy that Travis is gone and she’ll focus on the holidays and work. Billy reports everything is trending upwards. Vikki thanks him for letting her know about Travis, and imagines telling her parents about her broken engagement. Billy thinks her family will be there for her. Talk turns to Traci inviting him over; she wants to put the family back together. Vikki suggests he try – he’ll have to be the one to set things straight.

The Abbott family gathering is breaking up when Billy arrives. “Am I too late for breakfast?” Traci pulls him inside. Jack confronts him about not having the good sense to stay away. “You are no longer an Abbott.”

In Victor’s office at Newman, Victoria has something to tell him, but doesn’t want him to say ‘I told you so’, but just support her. He can do that.

Michael and Lauren celebrate their anniversary.

Jack says to Phyllis, “Obviously we’re not Michael and Lauren, funny you should mention that; I was just thinking of their wedding. Do you remember that? You left that night with Nick Newman – funny how history has a way of repeating itself.”