Y&R Day Ahead Recap: Nikki pressures Sharon to prove her love for Dylan

Thursday December 1, 2016: Jack takes on a new outlook, Sharon and Mariah have a run-in with Nick, and Billy notices Cane’s pain. 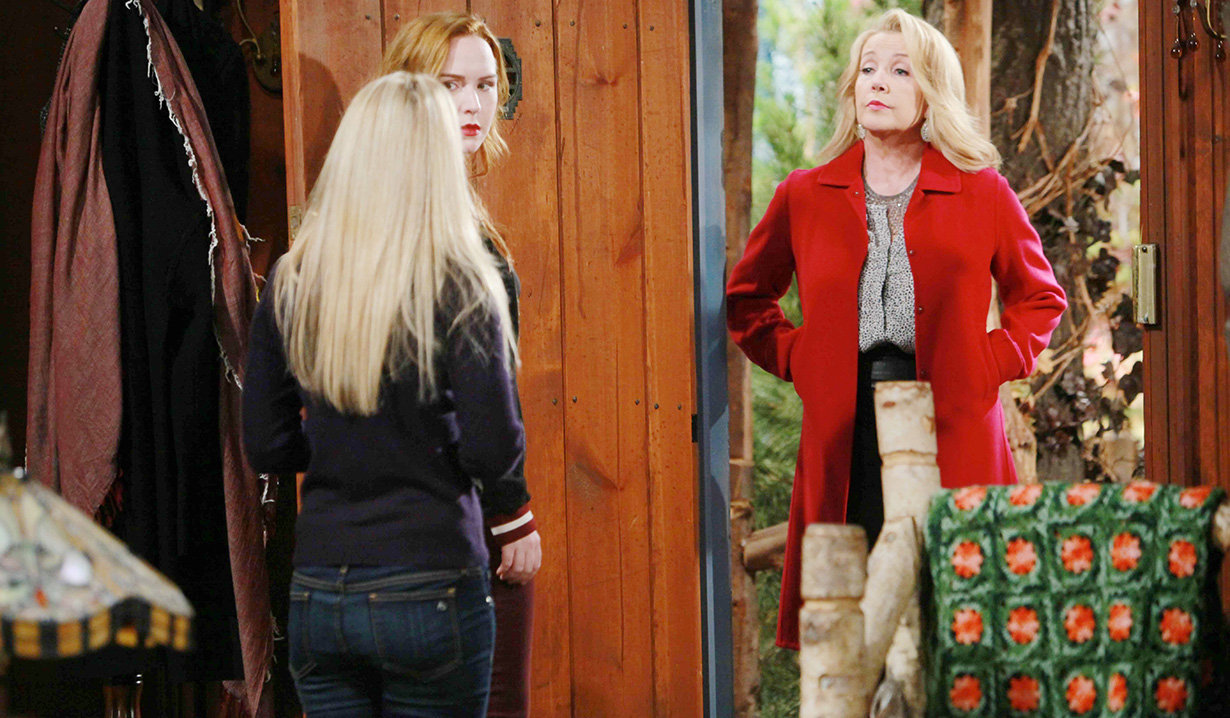 At home, Lily and Cane debate about him returning to work on crutches. He says working from home hasn’t been so bad and alludes to her sexy nurse costume. They start making out, but Cane has to get to a meeting. Lily notices he may have a fever and offers to drive. Cane sends her to warm up the car and then checks for his painkillers in his briefcase.

In the Club dining room, Phyllis snarks about Sharon to Michael, but admits Dylan is a stand-up guy. She hopes the situation doesn’t ruin Nick and Dylan’s brotherly relationship. Talk turns to Thanksgiving. Phyllis tells Michael about spending time with Jack; by Christmas they could take another step. She knows Michael doesn’t want her to get her hopes up. He wants her to be realistic. Phyllis thinks if Sharon and Dylan can stay together, she and Jack can get another shot too.

At Jabot, Jack tells Neil he ran into Henry, a man they treated in detox, at Crimson Lights, and he’s homeless now. Neil notes how much Jack cares; they need him back at the foundation. He wonders if seeing Henry in dire straits gave Jack a glimpse of himself. Jack maintains his foundation days are over, but Neil keeps pushing. Jack wonders if he’ll also pressure him to take Phyllis back. Neil muses, “One step at a time, Jack.”

News: Y&R alum Vivica A. Fox in A Husband for Christmas Billy finds Victoria working at Brash & Sassy and says she could have stayed home under the circumstances. Victoria isn’t that fragile; it’s not the first time she’s been cheated on. Billy wants to clear the air and apologizes for sleeping with Kelly. He assures her she’ll get past the pain. Victoria shrugs off Travis as another relationship that didn’t work out – she’s getting used to it. Billy says she deserves better. Cane enters with Lily’s help. She leaves, and Billy notes Cane grimacing in pain. After, a consultant arrives and exasperates Victoria. Cane and Billy urge her to go for a walk and they take the meeting. A brunette in exercise clothes arrives – she’s a physiotherapist sent by Lily for Cane.

At Crimson Lights, Mariah and Sharon are remarking on the restraining order when Nick appears with Christian. Sharon reminds Nick of their history; they could have worked things out. Nick counters the history wasn’t all good. Mariah interjects that the secret visit was Chloe’s idea. Nikki arrives, notices Sharon, and barks at her to get away from her grandson. Mariah gets Sharon to leave. Nikki wants Nick to call Leslie so Dylan will get visitation but not Sharon. Nick won’t do it. She wonders how he has any sympathy for Sharon, and Nick notes she’s saved all of hers for Dylan, whom he can’t trust either. Nikki thinks it might be different if they weren’t together.

At home, Mariah reassures Sharon, who is worried about how far Nick will go. She laments giving in to the secret visit with Christian and vows to think with her head from now on so she doesn’t hurt Dylan. Nikki arrives. Mariah tells her to go away. Nikki is there because she and Sharon love the same person. Mariah leaves them. Nikki challenges Sharon to prove she loves Dylan by setting him free. Sharon is appalled. Nikki wonders if she loves Dylan enough to give him a chance to be part of Christian’s life. They argue. Nikki intones, “If your love for my son is real, you’ll know what to do.”

More: Fifth Annual OpportuniTea High Tea with stars of The Young and the Restless

Phyllis arrives at Jabot as Neil’s leaving and encourages Jack to return to the foundation. Jack gives her a list of work-related tasks to handle so he can free up some personal time – he may just return to the foundation. He reflects about letting go of things that are holding him back and piecing together things that are broken. Jack makes it clear nothing has changed with them.

At the park, Victoria runs into Nick and tells him she broke things off with Travis. They commiserate about not following their instincts and remark on being there with Christian, who is living proof the future is rarely how they picture it. Vikki wonders if he’ll be as positive if Sharon and Dylan get visitation. Nick vows it won’t happen.

Mariah finds Michael at the Club and updates him on her and Sharon’s run-in with Nick and Nikki, and Nikki’s unexpected visit to the house. She thinks Nikki is the problem, not Nick. Nearby, Lily buys Neil lunch. They discuss Cane, and Lily says he’s not even taking pain meds.

Lily arrives at Brash & Sassy looking for Cane. Billy says he’s with the physiotherapist, which was a good idea because he’s in a lot of pain. Cane appears, limping. Lily takes him home.

Faith says to Nick, “Mom and Dylan can’t be around Christian or they could get arrested.”

Dylan tells Paul, “I went to him to fight to be a part of his life and we hit a roadblock, so now we’re going to have to find another way.”

Michael asks Sharon, “What is it?” Sharon replies, “I need to divorce Dylan.”