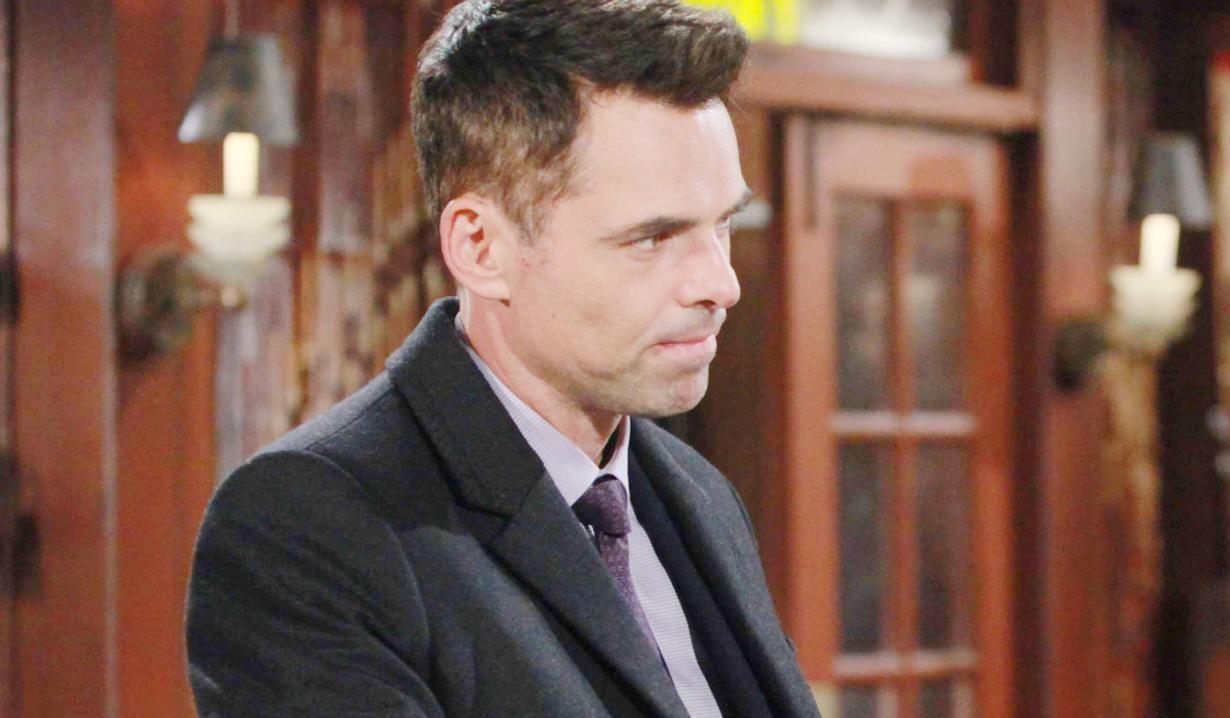 Billy arrives at the Chancellor estate where Jill wishes him a Happy Thanksgiving. She informs him they’ll be feeding the homeless at Crimson Lights. Billy is suspicious, and then notices she has ‘Brash & Sassy’ printed on the aprons. Jill enthuses that they’ll be handing out B&S toiletries with the food. Billy isn’t into it. Jill says it’s mandatory. She suggests he invite Victoria, but Billy says she’s with her soon-to-be fiancé. When Jill hears Victoria didn’t answer Travis, she thinks she’s waiting on Billy. Exasperated, Billy grabs the box of aprons and goes.

At Crimson Lights, Summer worries about Phyllis being alone on Thanksgiving. Phyllis reassures Summer it’s fine to eat with the Newmans. Abby appears and accuses Phyllis of planning to ambush Jack. Phyllis reassures her. Abby apologizes. She’s on edge because Ashley’s out of town and Traci has the flu. Phyllis encourages Summer to join Abby and Jack. Phyllis will be there serving the homeless. On the patio, Mariah looks on as Hilary bickers with Devon about covering the meal for the homeless. Devon has faith she’ll make it work. Hilary joins Esther and Phyllis inside. Phyllis and Hilary snipe back and forth. Later, Billy and Jill arrive and spot Phyllis. Jill tries to get Billy to leave. Esther informs Jill she’s her boss today and makes her don a hairnet. On the patio, Phyllis and Hilary bicker about Jack. Devon interrupts. Back inside, Hilary notices Billy and Phyllis exchange a smile. She tells Mariah, “Things are about to get interesting.” Hil baits Jill about Billy being there with his mistress. Jill scoffs. Hil gets her cameraman to tape Phyllis and Billy. Devon puts a stop to it. They’ll use Mariah’s footage. Meanwhile, Billy and Phyllis chat. Phyllis relays that Ashley and Traci cancelled on Jack, and suggests Billy join him for company. He asks how she and Jack are doing. She’s hopeful. Jill butts in and sends Billy for forks. She orders Phyllis to back off her son. Phyllis mocks her hairnet.

In the cabin, Jack takes a call from Kyle and assures him he’ll be with the whole gang. Abby and Summer arrive. Jack knows about Ashley having to work. Abby says Traci has the flu. Summer discovers the turkey’s still cold. Abby decides they’ll deep-fry it. Soon they’re engulfed in smoke and Jack runs for the fire extinguisher – you’re not supposed to deep-fry a frozen turkey. Jack and the girls eat pies and declare it a ‘singles’ Thanksgiving. Abby is thankful for designer shoes, Jack for football, and Summer for potpourri. Jack learns he’s eating the apple crumble intended for Victor and chuckles that sometimes revenge is best served a la mode! After the girls leave, Jack imagines Phyllis and Billy together in the cabin. Later, Billy arrives at the door. “Happy Thanksgiving.”

Neil and Moses arrive at Cane and Lily’s house for Thanksgiving. The twins bring Moses to hug Cane, who is recuperating on the sofa. Lily is excited for him to get back on his feet; he’s been stir crazy. Cane tries to get up but grimaces in pain. Lily and Neil announce they’ll bring the dinner over to him. Cane is thankful for his family and career, Lily for the doctors that took care of Cane, and Neil for finding his mother. The twins can’t think of anything, but Moses is thankful for ice cream.

Related: Find out what Y&R’s Victor Newman has to be thankful for

At GC Buzz, Hilary is stunned by Mariah’s footage – she may have pulled their butts out of the fire. Later, Devon phones Lily and asks her to watch their holiday episode.

Lily turns on the TV at home. Hilary introduces a compelling story straight from the heart – it’s about JJ, a homeless person who was once on the other side of the ladle. She lost it all when she became an addict. JJ is clean now. An ad for the Abbott-Winters Foundation follows. Neil wants to go to Crimson Lights. Cane urges Lily to take the twins too. Once alone, Cane reaches for the painkillers.

Back at GC Buzz, Devon is very proud of Hilary. Hil runs off to catch the cameraman and hands him an envelope to deliver – no one can know about it. She rejoins Mariah and Devon, and snarks about not being able to edit Mariah out of the interview.

The GC Buzz cameraman enters Crimson Lights and hands JJ the homeless woman the envelope. It’s full of cash and a note urging her to find her children and rebuild her life; it’s never too late. Nearby, Phyllis and Jill bicker until her grandchildren arrive with Lily and Neil. Jill turns back to Phyllis. “Billy deserves better than you and so does Jack.”

Nikki says to Sharon, “Do me a favor and stay away from my family.” Dylan looks on.

Abby tells Victoria, “Maybe all the happy ending needs is a little leap of faith.” Victoria looks over at Travis and smiles.

Billy says to Jack, “She would do anything to make it up to you.” Jack asks, “Was she telling you how much she loved me when she was naked with you on this sofa?”