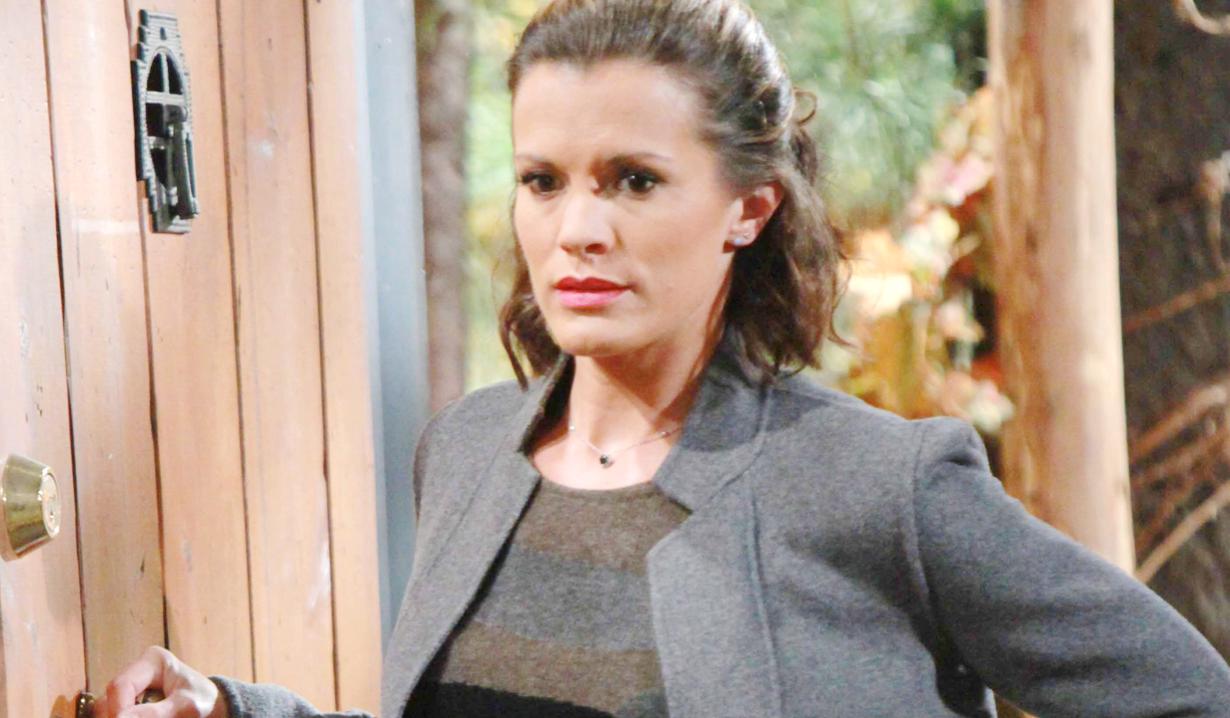 At Sharon’s place, Mariah defends Dylan’s actions to her mother. She points out he didn’t run out on her after what she did, as most would. Mariah urges Sharon to find Dylan and apologize, and to let Faith be so she can feel normal for a bit. Sharon protests. Mariah reassures her that Faith loves her; she’ll get past this. Mariah suggests Sharon go to work to distract herself. Sharon feels it will probably make everything worse, but goes.

In the tackhouse, Nick wants Chelsea to join the Newmans for Thanksgiving. She says Victor already invited her and she accepted. They go on about Connor and Christian always having each other. Faith appears. Her Thanksgiving homework is due to be uploaded – she has to make a video with costumes. Chelsea helps with costumes and then leaves them to it. Later, Faith and Nick watch the completed video starring Nick.

Kevin finds Chloe at work and they rehash the birthday party at the Newman ranch. Chloe felt bad for Sharon; she came between a child and his father, but she’s not going to judge the woman. Kevin says, “Maybe that’s because you’ve done the same thing.” Chloe’s insulted. Kevin points out she hasn’t told Bella’s father about her. Chloe angrily says it’s her kid, her call, and her life. Kevin wants to discuss Thanksgiving plans. Chloe tells him to make plans without her. Kevin is disgruntled at her brush off and leaves. Sharon arrives and commiserates with Chloe over having complicated lives and being judged. They hug. Chelsea enters, reassures Sharon her job is secure, and Chloe goes. Sharon learns Chelsea was present when Faith got dropped at Nick’s. Sharon accuses Chelsea of wanting whatever Nick wants. Chelsea thinks that’s unfair. They argue. Sharon feels it’s obvious Chelsea wants Nick. “If you want to go on fooling yourself, go ahead.”

At GC Buzz, Hilary and Devon argue about Sharon having donated the money they paid her to a charity. Hilary thinks she’s hitting her stride as a journalist, but Devon has read online comments and feels she has a problem. He warns people will get burned out on her sad stories. Hil will keep it exciting with new information. Devon wants to give people something positive. Hil is upbeat about the idea that Mariah will cave and give her more dirt on Sharon. Mariah arrives and Hilary immediately baits her by wanting to find someone Sharon confided in. Mariah insists she knows nothing. Hil thinks she’s protesting too much. Kevin appears. He announces he screwed up with Chloe and asks Mariah how things are at home. Hil sends Mariah away and corners Kevin. She thinks there’s more to Sharon’s secret and warns she won’t stop until she gets the whole story. Mariah returns and makes Kevin go. Hil thinks he knows something about her. Mariah tells her she’s wrong. Devon hands Hilary a paper that will change things. She reads. “You have got to be kidding me?” She refuses to do the story. Devon counters that he cuts the checks and they are doing the story.

In Chancellor Park, Billy watches as Travis, on bended knee, tells Victoria he loves her and implores her to say yes. Vikki pulls him up to look her in the eyes. She wants to know where all of this is coming from. Travis makes a speech about making a life together – he wants something permanent with her. Victoria isn’t saying no, but needs time. Travis will wait. She leaves, and Billy also walks away.

At the Club, Abby and Ashley discuss Thanksgiving. Ash gets a call that she has to be in San Francisco. She still has lots to be thankful for. Later, Billy arrives and recounts the story of Travis’ proposal to Ashley, who wonders how he feels about it. He speculates about being the person to ruin Victoria’s happiness. Ash mentions people shooting the messenger. Billy won’t run and tell Victoria the whole truth.

Victoria runs into Abby in Crimson Lights and tells her Travis proposed. Abby talks about how Stitch shocked her by wanting to try for a baby; relationships are difficult. She advises Vikki to wait until she knows exactly what she wants. Later, Ashley meets Travis and updates him that Michelle left. He assures her Michelle was a mistake and he wants Victoria forever.

Billy finds Vikki at Brash & Sassy. She tells him about Travis proposing. Billy feels it’s the next logical step. Vikki asks if he has any input. He tells her to listen to her gut.

Chloe and Kevin meet up in the park. They both apologize, and will spend Thanksgiving together.

At home with his leg up, Cane turns and looks at the bottle of painkillers.

Hilary looks at Billy and Phyllis in the same room and says to Mariah, “Forget about the poor and unfortunate, things are about to get interesting.”