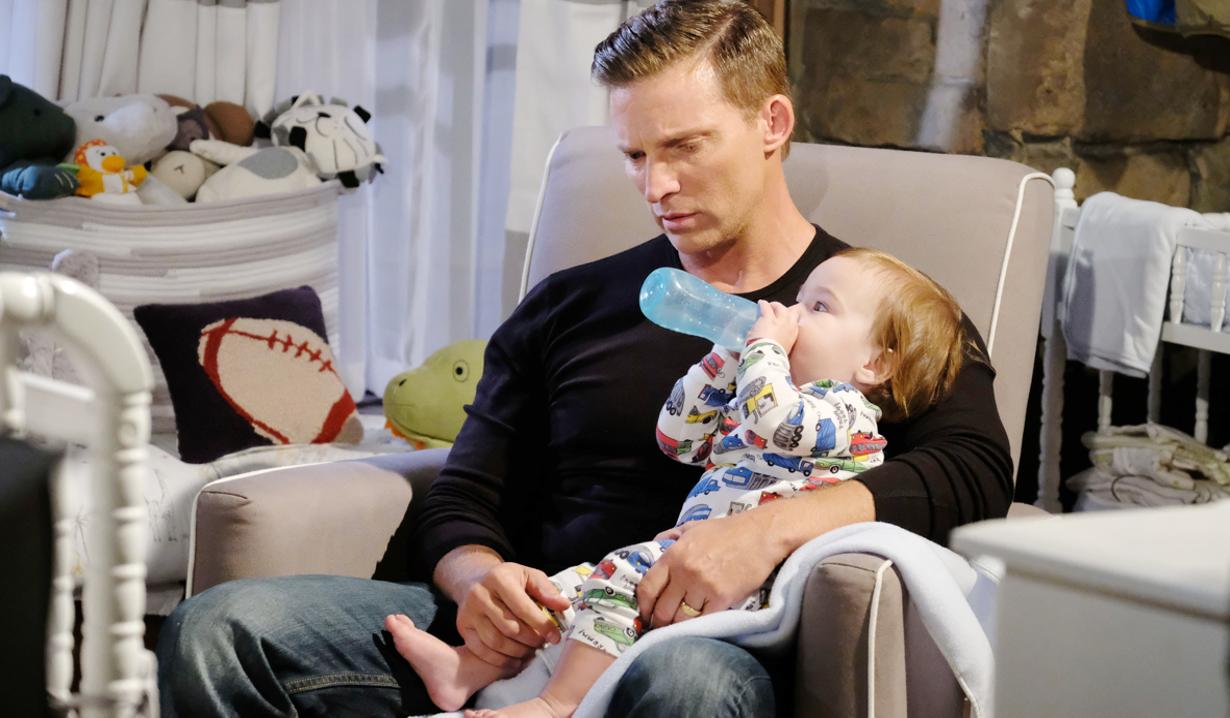 Dylan has Sully/Christian at the park. He feels there’s still a chance they can all be together. Paul joins them and brings up Patty. Dylan keeps mum. They rehash how they found each other and discuss fatherhood.

At The Underground, Sharon and Chelsea are both looking for Nick. Sharon hopes to convince him to spare her family. She thinks Chelsea should convince him to let the boy stay with them. Chelsea snaps at Sharon and they rehash their separate reasons for lying to Dylan. Sharon maintains that they have to put the child first.

At the tackhouse, Nick tells a photo of Sage that their son is coming home. The lie has gone on too long, and today he’ll set things right.

At Newman Enterprises, Abby enters Victor’s office as he leaves Chelsea a message to call. They discuss him setting up Jack. Victor is about to launch ‘phase 2’ and calls Curtis Fielding in. Abby exits. Victor confronts Fielding about selling him out to Jack Abbott. He will implode Fielding’s life unless he agrees to ensure the Abbotts don’t get away with this.

In Jack’s office, Ashley is outraged to find Phyllis in her bra. Phyllis hightails it to her own office. Ashley mocks Jack for buying Phyllis’ routine. She announces she found a way to prevent Brash & Sassy from blowing them out of the water. Phyllis returns as Ashley complains to Jack about his lack of focus on Jabot. They review Ashley’s plan – a new app called JabotGo. Jack’s impressed, as is Phyllis. Ash wonders why she’s still there. Jack sends Ashley to launch her plans. Phyllis thinks he was standing up for her, but he informs her he doesn’t forgive her, and doesn’t want her back.

On the basketball court, Lily fusses over Cane’s injured knee. He agrees to have it checked at the hospital.

At GC Buzz, Hilary reports on former Genoa City resident Deacon Sharpe having left Los Angeles. Devon compliments her on the ‘call a snake a snake’ line as Mariah listens. She hears Hilary tell Devon they need a big story – there must be something juicy going on in the town. The twins run up to Devon. He and Hilary agree to watch them while Lily takes Cane to the hospital. Hilary warns Devon they have a show to finish as the kids run around. Devon gets called to the Club. Hilary gets Mariah to watch the twins. The twins tell Mariah that Hilary used to be their grandma. When they jump in front of the camera and anger Hilary, Mariah tells her to unclench…she found a big story.

At home, Dylan holds Sully/Christian and talks to him. Nick arrives. “I’m here for my son.” He is sorry, and is irked that Sharon isn’t there. She arrives and makes an appeal to Nick that this is the boy’s home – he’s going to be traumatized. Nick reminds her that isn’t his fault. Dylan suggests they share time and split custody. Sharon jumps on board – it’s what Faith does. Nick is appalled they want him to pretend to be Uncle Nick to his son. He insists now is the time for the clean break and the boy deserves to know about his real mother, who loved him.

Abby returns a few of Stitch’s belongings to him at the hospital. After, Stitch looks after Lily and Cane, who, it turns out, will require knee surgery. On his laptop, Cane is dismayed to watch Ashley’s new launch. Stitch informs him his surgery will be Thursday, but Cane can’t take time off work.

Chelsea arrives in Victor’s office, where he asks for an update on the Christian situation and informs her Nick’s at Sharon’s right now – he has eyes on him. Chelsea frets about keeping the boy’s paternity a secret from Nick, which makes them as bad as Sharon. Debate ensues. Victor maintains it was Adam’s wish that Nick raise Christian as his son, and to be a father figure to Connor. If he learned Christian wasn’t his son, he’d be devastated! Later, Victor tells Abby the mole was trapped and will plug up the leaks. Now they wait to see what GC Buzz will do.

Chelsea enters Sharon’s house as Nick warns her and Dylan not to try and stop him from raising his own son. He has prepared his home and will accept anything they want to give him to ease the transition. Dylan asks what if he says no? Nick will call the police and charge them with kidnapping. Dylan tells Sharon it’s over, and hands Christian tearfully over to Nick, with lots of reassurances. Sharon breaks down at the idea of saying goodbye. Nick tells Dylan that took guts and grace. He’s glad he was raising his son. Nick and Chelsea leave with Christian. Sharon and Dylan both sob.

Hilary realizes she has Mariah and Kevin on camera as Kevin asks, “Exactly how long did you lie and cover for Sharon?”

Faith asks Sharon and Dylan, “Did you just find out this morning? Or did you know he’s not Sully?”