Y&R Day Ahead Recap: Nick and Dylan butt heads, and Mariah breaks down 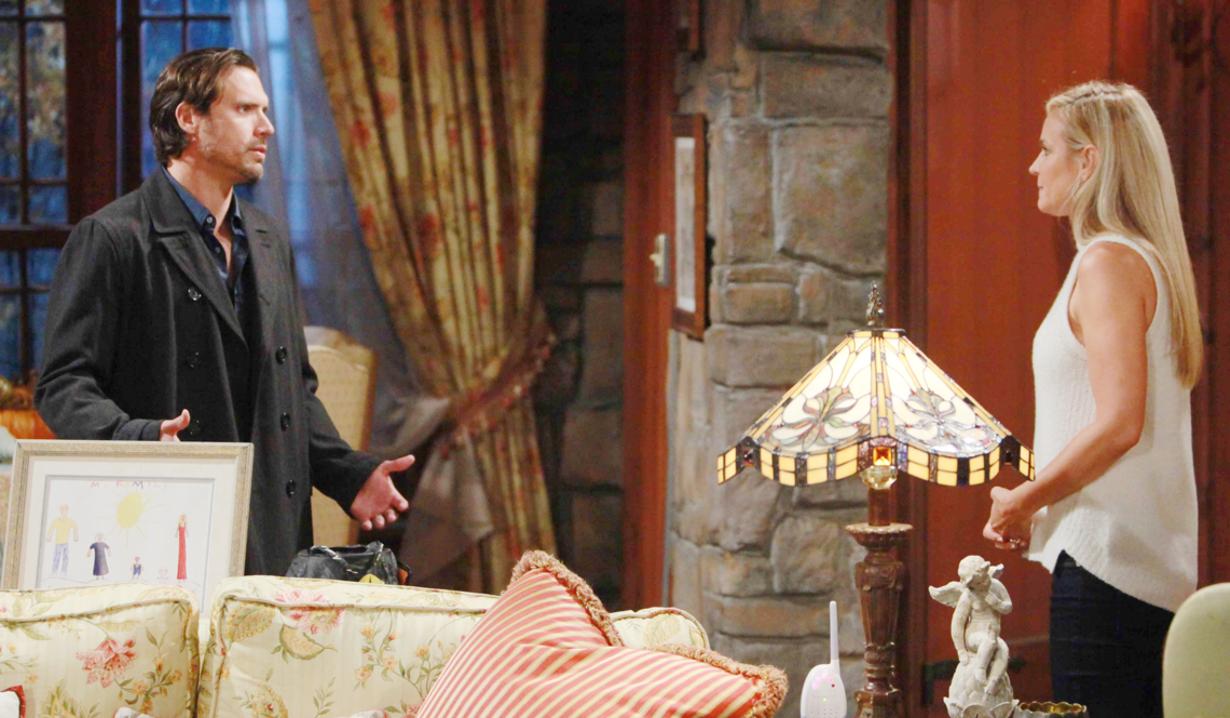 At The Underground, Kevin and Chloe post Halloween photos online and reflect on being happy. She feels for Nick and is glad Chelsea’s with him. They laugh about Chelsea seeing him naked. Chloe remarks on the need for Chelsea to find a new man and blurts, “That was the whole reason for…” Kevin asks what she means. Chloe changes the subject. Kevin suggests Chloe move in with him. She doesn’t want to rush things.

Nick unloads on Chelsea at the penthouse about Sharon’s confession that Sully is Christian – she’s known since before Sage died. He reveals that Sharon ran a DNA test and that Sage died on her way to tell him. He will never forgive Sharon for this. Nick thinks it all makes sense now. Chelsea remarks that there’s no way Dylan knew about this. She realizes she did the same thing to him. Nick remembers he took off with Connor, and worries he’ll grab Christian too. Chelsea reassures him that Dylan will do the right thing.

At Sharon’s house, Dylan digests the news that Sully’s not his. Sharon says she wasn’t with anyone else, and stammers away. He shouts, “Whatever it is just tell me!” Sharon recounts the story of Dr. Anderson’s deception, and admits she had miscarried and kept it from him. Sharon flashes to Anderson convincing her to stay at Fairview and keeping her family away. She explains how Christian came to be given to her. Dylan realizes how Patty fits in. All he wants is for Sharon to tell him she just found out tonight. Sharon is forced to admit she’s known for half his life, and the rest of the story unfolds. Dylan yells about her not saying a word as Mariah enters. He quickly deduces that Mariah knew too. Mariah pleads that all the decisions were for his sake. Sharon makes Mariah leave. Dylan doesn’t blame Mariah – she was lying for Sharon, who let her do it. Sharon protests that she did it for him. Talk turns to what was taken from Nick. Sharon blames Anderson. It bothered her to let Nick suffer, but she didn’t want Dylan to suffer either. Sharon tried to protect Sully’s little heart. Dylan agrees the baby is innocent and deserved better than a life built on lies. He heads upstairs. In the nursery, Dylan holds the boy and talks about their great Halloween and how it’s his job to protect him. Sharon appears. Her phone rings – it’s Nick and she ignores it.

At the penthouse, Nick tells Chelsea he can’t risk losing his son again and rushes out. Later, Chloe arrives, chattering away about her night. Chelsea tells her the news about Nick’s son, and worries that Dylan won’t give the boy up without a fight.

Paul meets with Patty’s doctor at Rivercrest. The doctor reveals that Patty claims she killed Dr. Anderson in self-defense. He clucks about Paul’s sister being lost in her delusions. In her room, Patty hallucinates Dr. Anderson confronting her. Anderson taunts that she’ll never be free of her. Patty cowers and Paul touches her shoulder. She tells him Dr. Anderson wants to hurt her. Paul brings up Anderson’s death. Patty explains it was self-defense – she wanted to shut her down to keep the secret. Paul asks her to tell him the secret. She says Dylan will need his daddy soon.

Paul runs into Mariah at Crimson Lights and says he’s been to see Patty, who warned him Dylan is going to need him. Paul thinks Mariah knows what she meant. As he presses her, Mariah shouts that she doesn’t have the answers. Paul decides to go speak to Sharon. Mariah stops him. “You can’t!”

At The Underground, Kevin reads a message from Mariah, who needs him at the coffeehouse.

Kevin arrives at Crimson Lights as Mariah admits to Paul that she knows what’s going on, but refuses to tell him. Mariah elaborates that Sharon and Dylan are going through this now and Paul can’t barge in. Paul agrees to give them some time. After, Mariah cries to Kevin that from now on everything will be divided into before and after tonight. She may be in a lot of trouble.

In the nursery at Sharon’s place, she tells Dylan they are the only mother and father Sully knows…they should fight. Dylan hisses at her to go. Once alone, he sits with the baby and cries. Later, Nick arrives downstairs. Sharon tries to get rid of him. Nick asks if Dylan knows. Sharon says he knows and advises Nick to relax – he’s won. Nick snaps that no one wins here. He’s taking his boy home. Dylan appears and declares he’s not taking Sully anywhere. Nick replies that he’s Christian, and he’s taking him home.

Phyllis asks Jack, “So you’re going to leak it to GC Buzz?” Jack confirms, “Tonight. By morning Victor won’t know what hit him.”

Chelsea tells Chloe, “If they can’t find a kind way to resolve all this, it’s going to get ugly.”

Nick shouts, “Get out of my way, I’m going to see my son.” Dylan stops him. “No. Not like this, you’re not.” They shove each other.