Tuesday November 1, 2016: Nick is stunned by Sharon’s reaction, Chelsea has startling news for Victor, and Abby and Stitch call it quits. 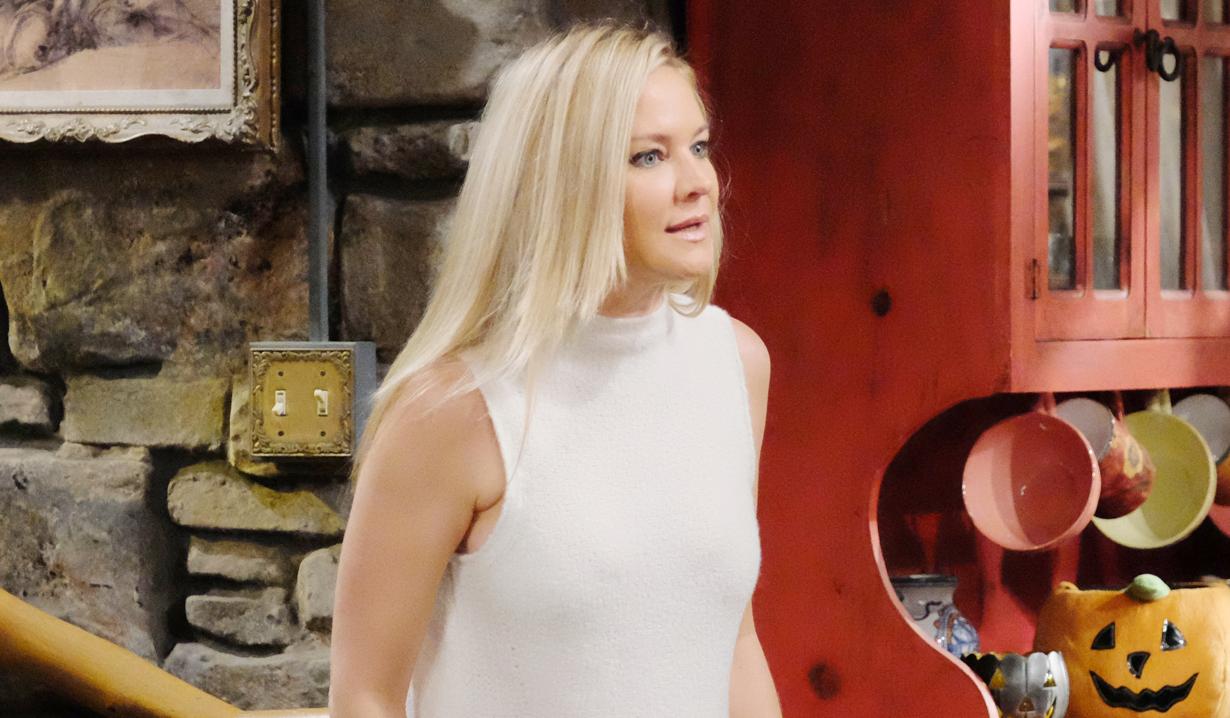 At The Underground, Nick is on the phone with Patty, who tells him Christian is alive and Sharon’s been raising him. Once he disconnects, Nick relays the information to Chelsea, who declares that Patty is sick. Nick can’t just forget about the call. He notes Sharon’s been acting strange and was terrified of Patty showing up at her place. Nick has to see his ex.

At home, Sharon and Dylan kiss and look at photos of the kids trick-or-treating. The phone rings – it’s Stitch, who asks Dylan to meet him at the coffeehouse. Sharon is supportive of him being a good friend. Dylan muses that they really have it all, and they express their love as he leaves.

Victor finds Abby crying at Newman Enterprises. She sobs that she should be out trick-or-treating with her little baby. Abby can’t help but think about what might have been and laments the end of her marriage. They discuss the idea of her giving it one more shot. Victor thinks that might make Ben feel better, but she’d still be in pain. He is always there if she has a problem. Abby thanks her father with a hug.

At Crimson Lights, Stitch talks to Dylan about his lost dreams of trick-or-treating with Max and the baby, and announces that he and Abby are done – he moved out. Dylan is chagrined to hear they’re headed for a divorce. Stitch tells him he’s lucky. Dylan says everything changed for him after meeting Sharon. It can change for Stitch too. Later, Abby arrives. Stitch admits he’s not doing so great. She’s not either. The sit, and Abby announces she thinks it’s time they filed for divorce. They agree to get an arbitrator and part tearfully.

At the facility, the doctor is surprised to see Patty sporting a positive new attitude. He remarks on how clear and serene she seems. Patty explains it’s because there are no more secrets. The doctor asks her to clarify. She tells him she was righting a wrong. They get into why Dr. Anderson wanted to harm her – Patty knew something bad. Patty asks to speak to Paul.

Nick arrives at Sharon’s house. She’s glad Chelsea tracked him down. He apologizes for missing out on Faith’s trick-or-treating. Nick then announces he had a weird call tonight. “From Patty Williams.” Sharon acts rattled and rambles on about Patty’s crazy behavior. Nick knows what Patty’s accusing her of – raising Christian all this time – it makes zero sense. Sharon begins to fall apart. She cringes and cries. “How do I say this to you?” Nick gapes. He pleads with Sharon to tell him Patty’s words were the rambling of a lunatic. Sharon admits it’s the truth – Sully is his baby. Nick struggles to get his mind around the confession. Sharon insists she didn’t know the whole time – Dr. Anderson convinced her she was pregnant, and gave her Christian to punish him. “We’re all victims, Nick.” Nick asks when she found out Sully was Christian. Sharon recounts the entire story – of the DNA test, Sage knowing, and her dying on her way to tell him. Nick is enraged as Sharon keeps apologizing. This is the second time she’s kept his child from him. Sharon whispers that Dylan doesn’t know. Nick, disgusted, heads upstairs. “He’s coming with me. I do not want my children in this house.” Upstairs, Nick says he feels bad for Dylan as Sharon appeals to him to give her one more night to tell her husband. Downstairs, Dylan arrives and calls out. Sharon and Nick come downstairs. Nick informs Sharon he’ll be back in the morning and exits. Sharon asks Dylan to sit down with her. Dylan chooses to stand. Sharon gulps and sobs, “I’m so sorry!” Dylan starts to get scared. Sharon shakes her head. “Sully is not your son.”

In the penthouse, Chelsea flashes to Adam telling her Sage’s baby, Christian, is his son. She grabs her keys and purse and leaves.

At Newman, Chelsea tells Victor she’s there about Nick – apparently there’s a chance that Christian is alive. Victor is skeptical of Patty as the source, but knows Sharon is capable of deceit. Chelsea reminds him they both know Christian was Adam’s son. “What do we do?” Victor feels if the child is alive, Nick should raise him as his own. Chelsea supposes that’s what Adam would want, but is it fair to Nick? Or Dylan? Victor thinks it would give Nick the chance to be a dad again, they can’t deprive him of that. Once alone, Victor tells Adam’s photo that his son is alive – he loves the fact that his children are with them.

Paul says to Mariah, “Patty told me that Dylan was going to need me. I don’t know what she meant, but I think you do.”

Chelsea says, “My God, I did the same thing to him.” Nick replies, “He took off with Connor. What if he takes off with my son?”

Dylan screams at Sharon, “Tell me. Whatever it is, just tell me!”