Y&R Day Ahead Recap: Patty spills the beans in a chilling phone call 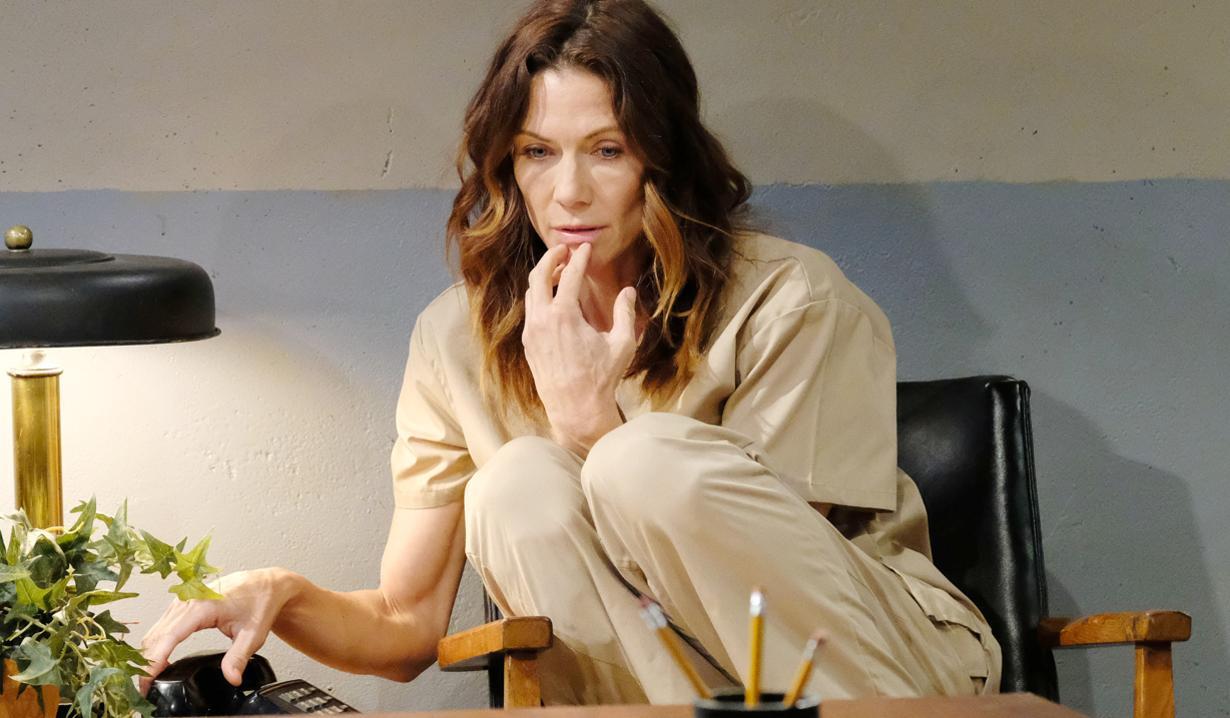 Travis arrives at home as Victoria’s dressing the kids in their costumes. Billy’s there too, and takes the kids to the kitchen. Vikki asks Travis about lunch with Abby – did he try to get her sister to incriminate herself? They bicker. Billy returns with the kids, who want Travis to trick or treat with them. He doesn’t have a costume. Billy quips that he looks like a ghost – that’ll work.

At Jabot, Jack tells Phyllis about fooling Travis in the park. Phyllis is puzzled Victor would send someone new. She mentions the board member, Fielding, seemed nervous. Jack checks out the information she got – it’s exactly what they need to start digging Victor’s grave. He’s keen to get the information to GC Buzz right away; Victor will never see this coming. Phyllis wants to be more thorough. Jack goes for sandwiches.

More: Reminisce over past scary moments in soap history in time for Halloween

At Newman, Abby has told Summer about her mom meeting the mole. Victor appears. He stuns them by saying he never left town. Vic asks to speak to Abby alone and asks what she’s so concerned about. Abby reports she saw Curtis Fielding do a briefcase exchange with Phyllis, and is surprised Victor’s not angrier. Vic’s known for a while that Fielding is leaking information to Jack. He let Fielding think he was getting away with it, and it was a test for Travis, which he failed. While he was investigating the family against orders, Abby found the leak. Abby realizes he leaked Jack and Phyllis phony information – he’s setting them up along with GC Buzz.

Summer shows up at Jabot and confronts her mother about what she’s doing – Victor will have her and Jack arrested. Phyllis explains she wants Jack to thinks she’s helping, but she plans to save him from himself. Summer points out she’s lying to him again. They argue. Phyllis doesn’t want a lecture and makes Summer promise to keep quiet. She prays Phyllis knows what she’s doing.

Dylan arrives at home and Sharon updates him that they found Nick. Faith appears in her Statue of Liberty costume and gets up to speed on Nick being sad about Christian. Sharon assures her he’ll get past this. Dylan sends Sharon and the kids out without him; he has something to take care of.

In Rivercrest, Patty tells an orderly she won’t be there much longer. Later, Dylan arrives and grills Patty about why she wanted to see Sharon. Patty misses her cat. Dylan wonders why she thinks she’s getting out, and tells her to leave Sharon alone. Patty tears up. “Secrets and lies. That’s what your wife and I were really talking about.” Dylan presses her to spill. Patty doesn’t want to hurt him. Her meds arrive. Dylan goes.

At The Underground, Nick flashes to Sage crying and smashes things. Chelsea enters. He hollers at her to go. She stays and tries to commiserate, but Nick is hostile. Chelsea stands her ground, gets coffee, and lets Nick know she understands how he feels. Nick talks about mourning Christian without Sage – he misses them and worries he won’t find peace again. Talk turns to Nick helping out at Sharon’s when Dylan was away. He enjoys Sully; it feels natural with him, but Sharon seemed uncomfortable. When Nick shares his pain, Chelsea hugs him.

At Crimson Lights, Billy, Travis, Victoria and the kids arrive as Jack chats with Esther. Jack interacts with the kids and trades barbs with both Billy and Travis, who gets called away. Billy notices Jack is getting coffee the way Phyllis takes it. After, he sees Victoria and the kids off, and Esther confirms that Jack ordered for Phyllis earlier.

Travis enters Victor’s office and Abby leaves. Travis explains his actions were proactive, and he’s surprised when Victor fills him in on Fielding and Phyllis. Victor complains about him investigating the family. Travis argues they had access to secure documents. Victor says he and Abby will handle the situation from now on; Travis will go back to crunching numbers since he blew it.

Jack returns to Jabot, where Phyllis convinces him to hold off on using the documents and showing their hand too soon.

Travis gets home and complains he was upbraided for being too thorough. Victoria says she warned him, and goes upstairs.

At home, Sharon watches as Dylan interacts with Faith and talks about his huge plans for Sully’s first birthday.

Nick and Chelsea are leaving The Underground when Patty calls him. “There’s something you need to know. Christian is alive. Sharon has him.”

Chelsea says to Victor, “Apparently there’s a chance that Christian is alive.”

Patty’s doctor asks what brought about her change in attitude. Patty says, “It’s because there are no more secrets.”

Sharon stops what she’s doing and turns slowly as Nick says, “I got a weird call tonight…from Patty Williams.”