Y&R Day Ahead Recap: Travis reveals a scandalous past to Victoria 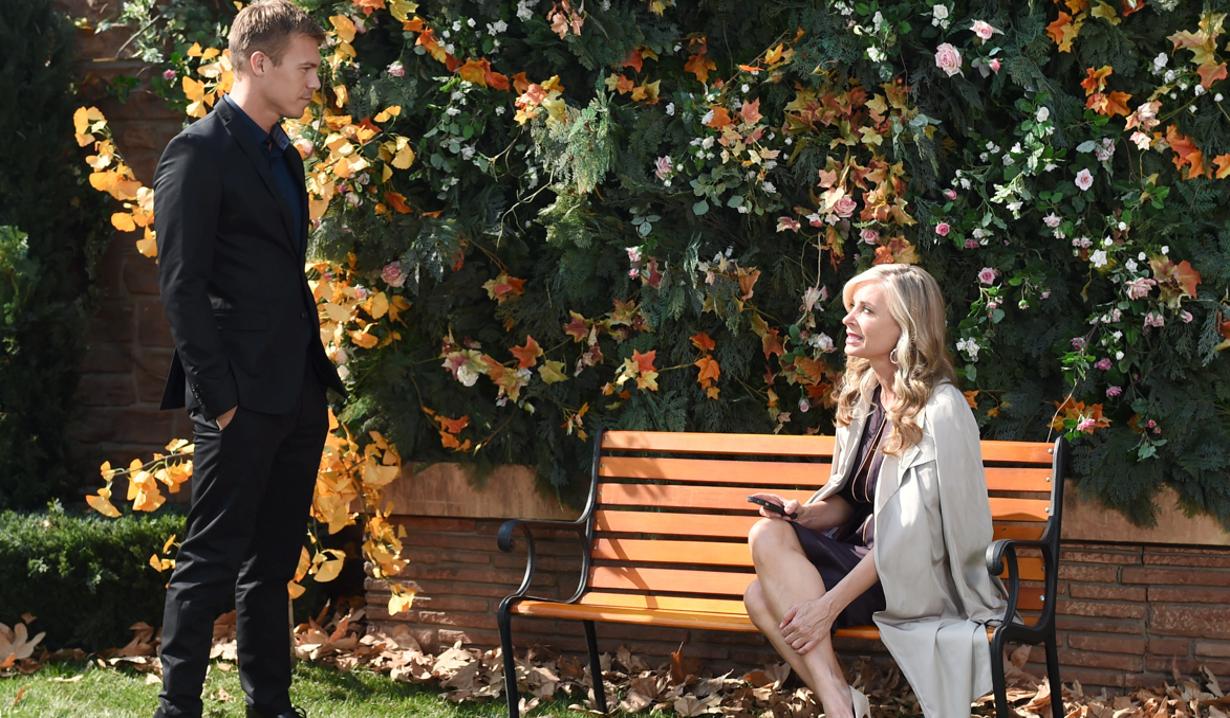 At the park, Ashley wonders why Travis thinks she sent him flowers. He explains that the card was signed by Michelle. Ash admits she called her after she ran into him. She wonders if he’s been completely honest with everyone about why he left New York and ditched his Wall Street career, and alludes to him being a person who slept with the boss’ wife. Michelle’s husband found out, fired him, and blackballed him. Has he found his way back in by using Victoria? Travis insists he wouldn’t use Victoria. Ashley admits she was concerned about his motives. Travis wonders if she’ll hold this over his head – he doesn’t want any part of the games they play. Ash warns if he’s working for Victor, he may not have a choice.

At the Club, Victoria reports to Nikki that things are going well for Travis at Newman, but she’s still wary Victor has an agenda. Nikki feels perhaps he just thought Travis would be a great addition to the company. Victoria would love to believe that, but it seems naïve. Nikki suggests they all have dinner later.

At Newman, Victor is taken aback when Abby asks for marriage advice. He advises her she has to decide if it’s worth addressing the issues. Abby isn’t impressed with that advice. Victor presses her to remember why she fell for Ben in the first place and hold onto that. He gets a call from Nikki about dinner. Abby prepares to leave. Victor counsels her to look out for herself if she feels her marriage problems are insurmountable.

Mariah is about to leave Hank’s Bar when a waitress tells her she left her phone. Mariah sighs and takes the repairman’s cellphone that she had tried to plant there. Kevin arrives and notices she’s acting nervous. Mariah lies that she was meeting a guy there. Kevin’s there to track down the stolen cellphone – he wishes it was turned on so he could triangulate the signal. Mariah announces she’s been stood up and exits. Kevin asks the bartender about the repairman’s cellphone. She hasn’t seen it, but mentions the girl he was talking to nearly left hers.

News: All My Children’s Lacey Chabert in Hallmark’s A Wish for Christmas

In Chancellor Park, Mariah turns on the repairman’s phone and throws it into a trashcan.

At home, Dylan senses Sharon is more shaken up by her stalker than she wants to admit. Sharon just needs to know they’ll be okay. Dylan makes comfort food. Sharon assures him she’s not gone off her meds. Dylan vows to protect their family. Mariah arrives, and Dylan heads out. Mariah assures Sharon she dealt with the cellphone. Sharon still has to figure out what to do about Patty’s demands. To keep her secret, she’ll do anything Patty wants.

Announcement: Soap stars walking for a good cause

In the facility, Patty contemplates an empty canvas and then starts painting. She paints herself and a kitty outside in the sunshine, and smiles.

At the station, Kevin tells Dylan he’s traced the cellphone to Chancellor Park.
In Chancellor Park, Dylan and Kevin realize someone wanted them to find the phone.

Nikki, Victor, Victoria, and Travis are seated at the Top of the Tower when Abby and Ben arrive. Ben wants to address their problems, and Abby says they have to let the walls down and be real. Stitch recalls when he first knew he had feelings for her. Abby only replies it was the same for her. At the table, Victor tells the others it’s important for Abby to be alone with Stitch. They toast to Travis’ first day at Newman. Victor praises him. Travis talks about protecting the company from Jabot. Victor’s not overly concerned, but asks Travis to deal with it. Nikki asks about Travis’ family. He says his father sold boats and his mother was a teacher. Victor talks about his rise on Wall Street after putting himself through school. Travis claims he lost his taste for it. Across the room, Stitch gets paged to the hospital. Ashley joins Abby, who relays that they’re working on their marriage. Ash notes she doesn’t seem happy about it. Abby tells her Stitch recalled exactly when he knew they were meant to be together, but she lied; she doesn’t think she has a moment like that with Ben. Meanwhile, Victor and Nikki leave. Vikki senses something’s bothering Travis. He says a conversation he had with Ashley has left him worried she’ll use something she found out against him in the feud between the families. He admits he hasn’t been completely honest and tells her the truth about Michelle and getting fired. Travis was disgusted with himself and knew he had to make a change. Victoria realizes she was the other woman he loved.

In the Club dining room, Nikki wonders if Victor hired Travis as a way to get Victoria back at Newman.

Victoria rants at Travis, “You slept with the boss’ wife; you got blackballed. You sleep with the boss’ daughter maybe it will get you back in the game. Is that the kind of man you are?” Travis shakes his head ‘no’.

Victor taunts Phyllis, “You talk about clean hands. How dirty are your husband’s hands?”

Jack asks Summer, “Is there something I can help you with?” He closes his laptop. Summer asks, “Why are you researching Newman Enterprises?”