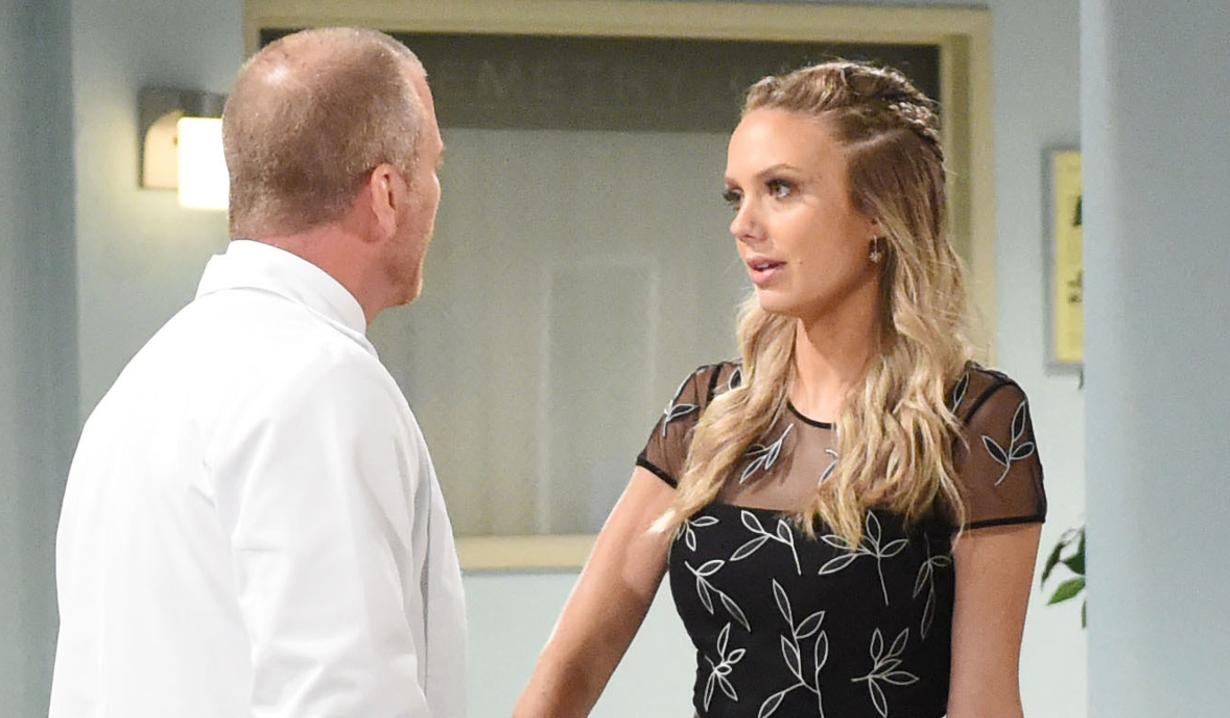 At home, Dylan is on the phone with Kevin, pressuring him to find out who is calling his house. Kevin is busy but agrees. Dylan hangs up and Sharon tries to dissuade him from pursuing the matter. Mariah appears as they bicker. Dylan informs her Sharon has a stalker. Mariah is aghast and gets updated. She urges Dylan to find the creep and lock them up. Dylan leaves, and Sharon tells Mariah it’s Patty…and it’s a disaster! Sharon decides she has to be proactive, and encourages Mariah to stay close to Kevin and update her on what they find out.

At the station, Paul questions Kevin about the favor he is doing for Dylan. Kevin acts dodgy. Paul wonders if it has anything to do with Victor. Kevin reassures him. Dylan arrives and pressures Kevin to track the caller. Mariah joins them. They agree she can stay. Dylan learns Paul left to meet Sharon, and wonders why she never mentioned it to him. Mariah defends her.

Abby and Summer are working at Newman and discuss Travis being put on the fast-track by Victor. Abby takes a call from Ben, who reminds her about their appointment with the fertility specialist. She makes excuses and cancels. Ben is irked. After, Summer notes Abby lied to her husband. She urges her to come clean with her Stitch.

Abby meets Stitch at the hospital and tells him they can’t keep pretending their marriage is getting better when it’s not. She breaks the news that there are no fertility issues – she’s been taking her birth control. Stitch is angry. Abby knows she loves him, but isn’t sure it’s enough; they never talk, they just pretend. Stitch agrees they should stop pretending and do the work. Abby worries they’re incompatible. Stitch says it’s worth trying because he loves her more each day. Abby assures him it’s not too late.

Chelsea thanks Nick for coming to the park with her and Connor. Suddenly, Nick gets weird and recalls that Noah had a truck like Connor’s when he was small, which reminded him how much he was looking forward to having a son again. He misses Christian. Chelsea can relate, and shares a story about Adam. Fun ensues as the three play on the picnic blanket in the grass. After, Nick hopes Adam’s in heaven taking care of his little boy. Chelsea comforts Nick as she imagines what might have been with Christian. Sharon arrives and Chelsea informs her she overstepped with the matchmaking. Sharon apologizes. Nick asks to hold Sully. He reminds him so much of Noah at that age. Sharon confirms with Chelsea she still has a job, and they part ways. Sharon gets a text from Mariah that Dylan and Kevin know the caller has a mobile phone. Paul meets Sharon. She makes small talk before asking about Patty. Paul hasn’t seen her for a while – the doctors are trying art therapy with her, and he’s a distraction.

At Crimson Lights, Nick thinks Sharon is happy and is just trying to share the joy. He asks Chelsea to cut her some slack. Summer appears. She mentions Sharon trying to hook them up, and talks about trying to get Phyllis back with Jack. Chelsea suggests she put Sharon on the case. She thinks there’s more to Sharon’s attempt at matchmaking between her and Nick than just spreading happiness. Once alone, Summer and Nick chat about watching kids grow up.

Related: Spoilers for all four soaps this week

At the police station, Mariah gets a text from Sharon, who is off to visit Patty, just as Kevin says he’s got something on the caller. She tries to phone Sharon but gets voicemail.

Patty paints in her room at the facility. She soon is called to see a visitor – Sharon. Patty was expecting her to show up. Sharon wonders how Patty got a mobile phone. She threatens to report her. Patty is unmoved. Sharon needs the phone calls to end. Patty remarks on how anxious Dylan will be to look into the calls – he seemed upset. She hopes he gets there soon. Sharon tries to convince her she doesn’t need to say anything, but Patty says, “I have a lot to tell Dylan, when he gets here. Mostly about a boy he thinks is his son, but isn’t.” Sharon looks stunned.

Ashley tells Phyllis, “This is a family company and you’re not family anymore. You really don’t belong here.”

Mariah says into the phone, “Dylan is on his way, you need to do something, Sharon. Call me back.”

Patty assures Sharon that someone will want to listen, and she’s sure he’ll be riveted.