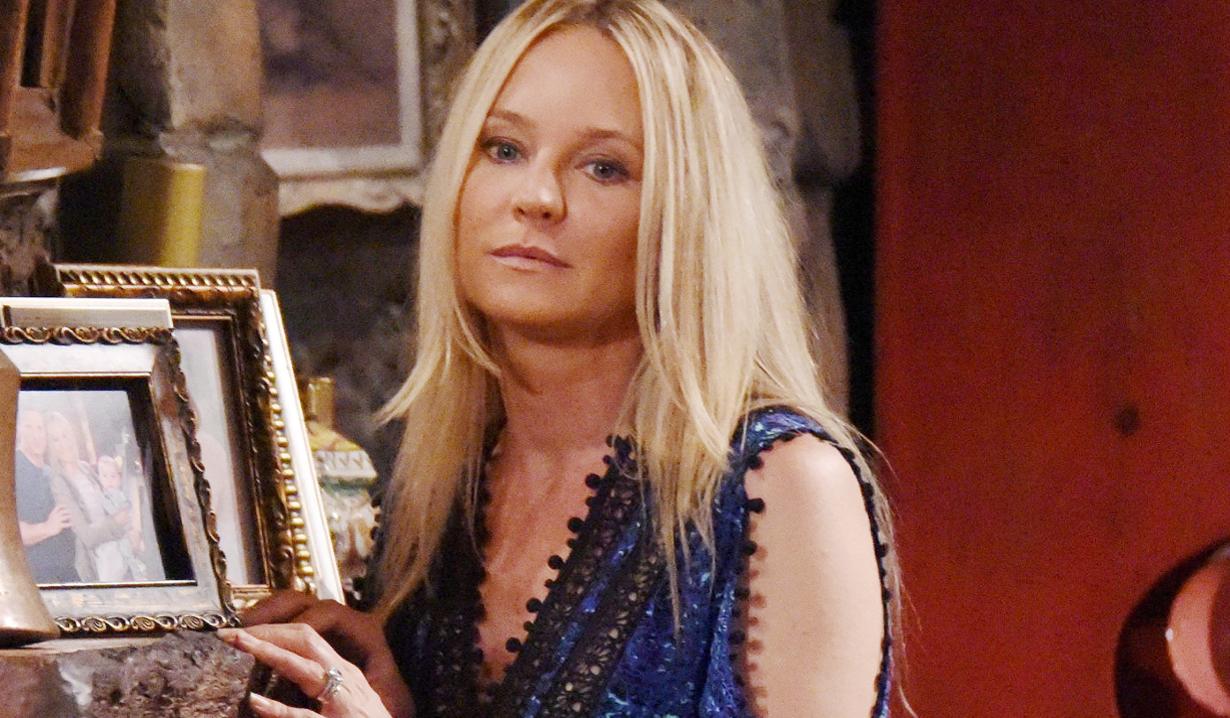 At the Club, Billy bickers with Victoria about her father liking Travis. Travis joins them and announces he accepted Victor’s job offer. Billy scoffs. “Of course you did.” Billy orders a drink and walks away laughing. Victoria wants to know why Travis changed his mind. She reminds him what he said Wall St. did to him. Travis reassures her, he can do the job and do it well, as for Victor having ulterior motives, that’s not his problem. He admits to having been bored. Victoria warns her father’s testing him. He knows.

At Jabot, Michael tells Ashley and Jack that Phyllis will grant the divorce free and clear with just one condition…she wants to stay on at Jabot. Ash can’t believe it. Jack smashes things and refuses despite Michael’s warning that Phyllis will up the ante. Jack leaves to ‘handle it’. Ash goes to Brash & Sassy and demands Billy talk Phyllis out of this plan. Billy says she doesn’t listen to him. They discuss Phyllis wanting Jack back. Ash knows when she puts her mind to something nothing changes it.

Summer’s apartment is full of Phyllis’ boxes that Jack had sent over. She remarks that this feels final, but Phyllis isn’t giving up. Summer doesn’t like the sound of Phyllis forcing Jack to keep her on at Jabot. “You will only make this worse.” Jack arrives to confront Phyllis about wanting her job, and Summer hightails it upstairs. Phyllis tells Jack she wants their life back. He doesn’t love her anymore. She wonders why she can’t keep her job then. They argue. Jack won’t work with her. Phyllis threatens to take half his company if he doesn’t comply. “We never signed a pre-nup.” Phyllis goes to get ready for work. Jack continues to protest. Phyllis won’t listen. He leaves. After, Phyllis tells Summer she’s going back to work with Jack.

Nick and Faith arrive at Sharon’s place. There’s a gift on the table, but Sharon sends her upstairs to change first. Nick confronts Sharon about using Faith to push him and Chelsea together. He orders her to stop planting seeds now. “Stay out of my personal life.” Sharon figures Chelsea enjoys having him around, and he needs it too. Nick tells her to just stop and storms out. After, Sharon reassures Faith, who thinks they helped and that Sage is thanking Sharon for what she’s doing. Sharon gets another hang-up call.

Chloe enters the penthouse and notices Chelsea’s feeling touchy. She admits it’s Nick – he hugged her, and it seemed like Faith, Sharon, and even Nick would like them to get together. Chelsea is concerned she gave him the wrong impression. They discuss the hug. Chelsea admits it felt good, but she may never be ready to move on. Chloe counsels her not to overthink it. Chelsea decides she needs to set boundaries and have the ‘just friends’ talk. Nick arrives. Chloe heads upstairs. Nick surprises Chelsea by apologizing for over-stepping his bounds and for Sharon and Faith. Chelsea laughs – she just did the work for her.

At Hank’s Place, Travis walks Victoria through their first meeting. He puts their song on the jukebox and she worries about her father breaking them up. They slow dance. Travis tells her no matter who he’s working for, this is who he is; this is who they are. They kiss for a bit. She has to go to work.

Travis walks Victoria into Brash & Sassy, where Billy wonders if she’s there to actually work. Travis goes, and Billy and Vikki bicker. She complains about his comments on her personal life, but snaps when he pretends he’s back with Phyllis. She lectures on him breaking up Jack’s marriage and assures him she feels nothing for him. At Jabot, Jack updates Ashley on Phyllis’ threat. He plans to make her life hell if she works there. Phyllis arrives in a foxy get-up. Jack says, “Follow me.” He leaves her in a tiny office with no window and a huge pile of papers to reconcile by morning. In the elevator, Ashley is joined by Travis, and the lift becomes stuck.

Nick arrives at Summer’s place and complains about Sharon meddling in his life.

Back at Sharon’s place, Faith unwraps a boy baby doll but there’s no card. Later, the phone rings. Sharon says hello and no one responds. Sharon becomes impatient. The caller says, “Hi Sharon. It’s me, Patty!” Sharon’s eyes widen and she whispers, “What do you want?” Patty lets her know she sent Faith the baby doll. She hopes she enjoys it, but notes it’s not like having a real baby though. “Is it, Sharon?”

Billy says to Victoria, “Your father is signing your boyfriend’s checks. What could possibly go wrong with that?”

Ashley says to Travis, “You were an up-and-comer at Hazelton and…” Travis, looking uncomfortable, says, “Grasswood. Yeah.” Ash marvels, “What a coincidence!”

Sharon asks Patty, “Why are you doing this?” Patty laughs. “You knew this day would come.”