Tuesday September 27, 2016: Jill and Lauren have a disagreement, Cane gets hit on by a model, and Victor makes an offer. 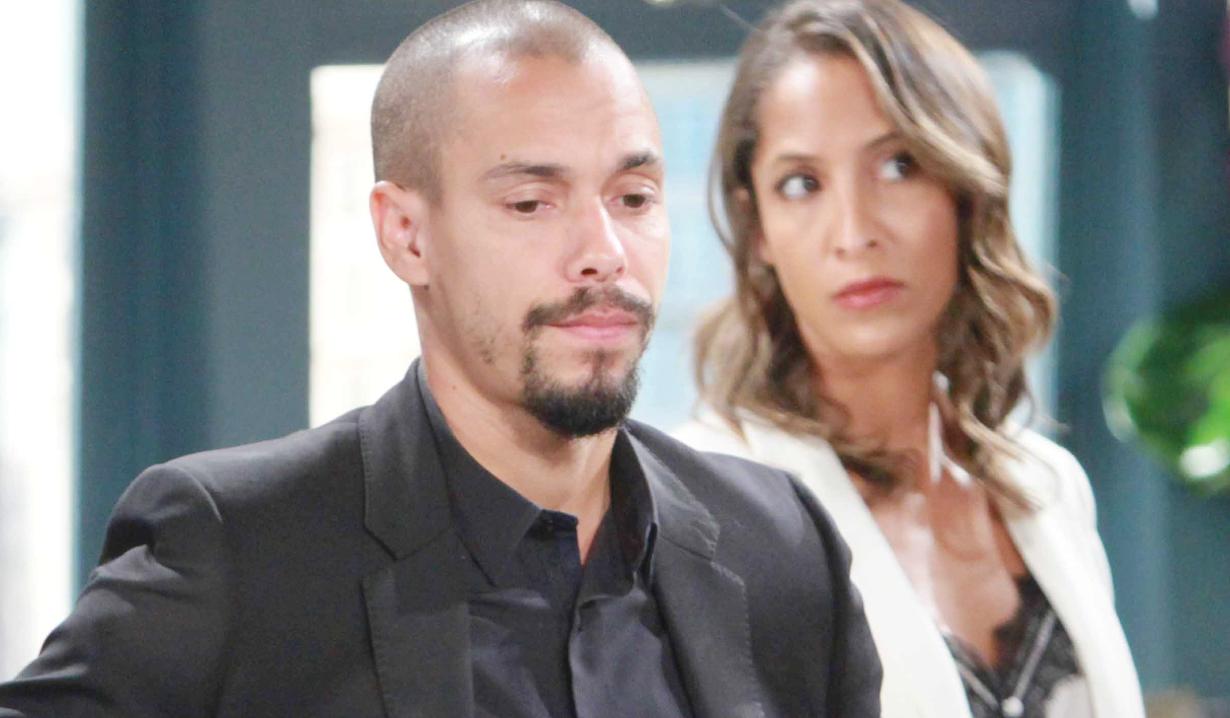 In the park, Jill tells Lauren she’ll give Fenmore’s the new Brash & Sassy fragrance exclusively. Lauren breaks it to her that Fenmore’s only works with established companies, not glorified dating services. Jill protests that there’s more to the company than trying to get Billy and Victoria back together – they have a real product that’s going to make real money. Lauren argues it’s not how adults do business. Jill thanks her for her condescending advice and storms off.

At home, Travis and Victoria are sharing the bathroom when Victor calls…for Travis. Victoria learns Victor asked Travis to meet him for a chat and groans. Travis reassures her, and says her father can wait while they shower together.

In the lab, Lily admires Cane’s Brash & Sassy ad campaign. She is making suggestions when Billy enters. He notes it’s Victoria’s job to give the woman’s point of view. Lily enjoys their rich tradition of bickering, but leaves. Billy tells Cane he’s now trying to do the right thing – Victoria should see the commercial first. Cane argues he’s still being a jerk. They argue over who has more right to run the company. Victoria arrives, gets up to speed, and tells Cane she loves his ad. Billy pulls her aside to question her. She says Cane’s not the enemy. Billy agrees – it’s Mommy Dearest. Meanwhile, Jill arrives and is disinterested in Cane’s ad. Cane teases her that he heard Billy and Victoria say ‘I love you’…maybe they’ll take her on the honeymoon. He goes to work and Jill leaves. In the office, Billy and Victoria agree to stick together where Jill’s concern and leave to ‘drink on it’. Later, Cane meets with the model from the commercial.

At Newman, Victor makes a call and says he has to know everything. He then flashes to his conversation with Victoria about Billy and Travis. Later, Travis arrives. Victor asks him what he knows about Newman Enterprises. Travis spouts some in-depth knowledge. Victor notes that Travis was well known for his business analysis and theorizes that he got out because others were profiting from his expertise. Travis explains why Newman is vulnerable. Victor respects him telling the truth.

Michael meets with Hilary and Devon at the Club regarding suing GC Buzz. Michael points out they reported that Devon tried to bribe them – will he sue them for doing their job? Devon argues he was protecting a friend. Michael maintains he has no case. Hilary is upset that the trolls win – what good is money and power if you can’t fight back? They debate as Hilary insists they have the moral high ground. Michael reiterates that a lawsuit’s not the answer. Devon has an idea and leaves. Lily turns up and accuses Hilary of pushing Devon to bribe the reporter and notes Jack’s her priority. Hil assures her she’s not interested in cheating and calls her a hypocrite. Lily gets a text from Devon to meet later.

Devon shows up at GC Buzz and speaks to Howard Green, the producer, who snarkily thanks him for trying to bribe his reporter. Devon tries unsuccessfully to reason with him about reporting on Jack Abbott and rides him about how he profits on people’s misery. Howard isn’t interested in Devon’s rational appeal and plays foosball.

Devon meets Hilary and Lily in the Club office. The GC Buzz reporter he bribed appears. Devon announces he’s doing a follow-up interview. Hil and Lily try to talk him out of it, but he reassures them. In the interview, Devon announces he bought GC Buzz and fires the reporter. In the dining room, Travis wonders if the job offer comes before or after coffee. Victor chuckles. Victor writes down the offer and passes it to him as Victoria and Billy arrive. Victoria assures Billy that Travis can handle her father, but Billy is suspicious. Vikki thinks he’s jealous her father likes Travis. Victoria joins Victor and Travis, who says he just turned down her father’s offer to join Newman. They leave. Victor stews.

Michael kisses Lauren in the park. Lauren gives him a message for Phyllis in the hospital and complains about her run-in with Jill. Michael thinks she’ll make Brash & Sassy a success. Lauren phones Jill to see if the exclusive is still on offer. Jill concedes that Lauren may have been right.

Jill exits the office and sees Cane turn down the model’s advances. Jill praises him.

At the station, Kevin asks what happened, and Mariah tells him Faith is missing.

Faith enters Chelsea’s studio and tells her she needs her help. Chloe looks on.

Ashley says to Jack, “You don’t even have a pre-nup, this divorce could drag on for months!”

Y&R Day Ahead Recap: Hilary gets a...