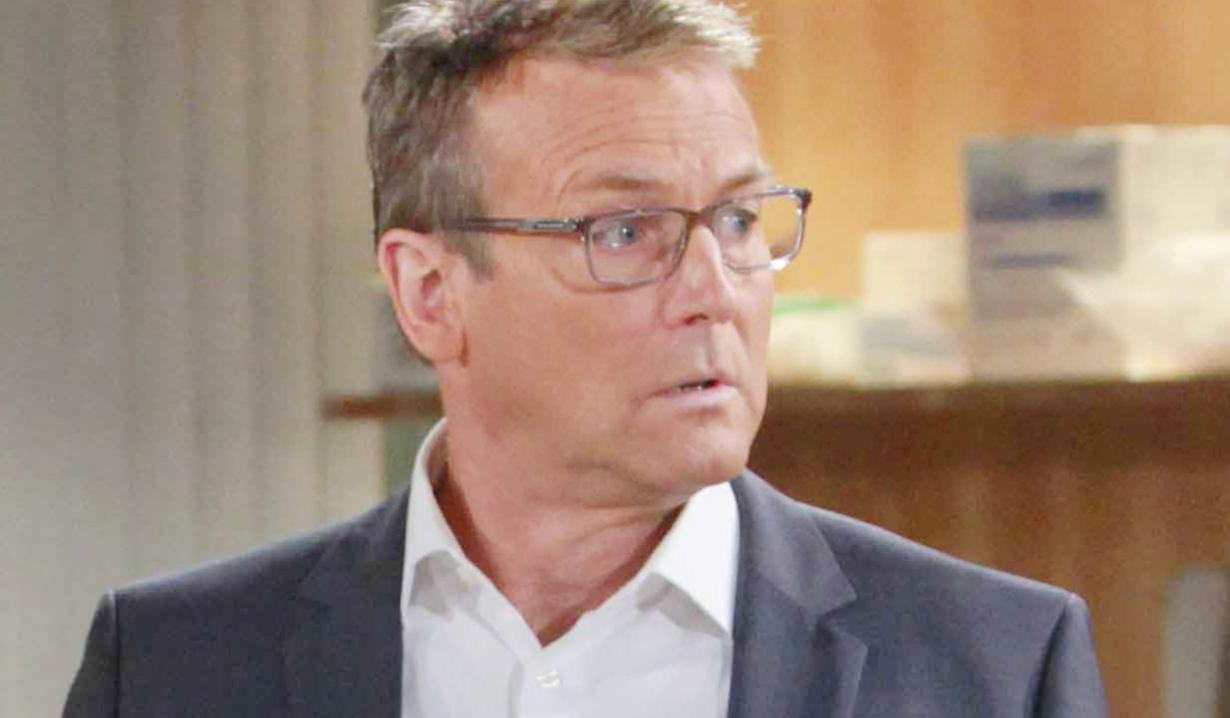 In the hospital, Stitch informs Phyllis she has a mild concussion but should stay for the night. Once alone, Phyllis asks Billy why he was at the house when she fell and where Jack is. Billy doesn’t know where Jack is, but points out he is there. He professes his love and says they can still be together. Phyllis breaks the news that she wants to get back with Jack. Summer appears and is upset at Billy’s presence. He goes. Summer hugs Phyllis, who asks about Jack. Summer says he left, but there’s still hope. Paul enters. Summer leaves. Phyllis tells Paul what happened and that Jack would never hurt her. Paul hands her a domestic abuse helpline card. Phyllis insists she’s not a victim and Jack doesn’t need to be put through anything else. “Close the book and let me put the pieces of my life back together.”

At Brash & Sassy, Victoria confronts Jill about offering Travis a job and tells her to knock it off. She rants that Jill’s manipulation is like Victor and calls her out for blackmailing Phyllis as well. “You’re out of control.” Jill scoffs that Travis is just a fling. Victoria disagrees and announces he’s officially moved in.

At the Club, a GC Buzz reporter asks Jack about a rumor – that he beat up his wife. Jack says he just wanted her out of the house. The reporter urges him to talk. Devon and Hilary appear as Jack protests that Phyllis grabbed his elbow and he pulled away. They confront the reporter. Devon offers the guy money to bury the piece on Jack. Jill enters and Devon updates her on Phyllis’ fall and the reporter hounding Jack. Hil and Devon complain about GC Buzz. Jill remembers when Hilary used it to trash Neil and his family. She and Jill nearly come to blows.

Victor arrives at Victoria’s house, where he’s greeted by Travis and Johnny. Travis lets him know he loves Vikki and she and the kids come first. Victor chuckles at his tale of Jill offering him a job to get rid of him. He warns whatever Jill does has strings attached, and she’ll use them to strangle you. Victor himself is only concerned about Victoria’s happiness, he hopes she’s finally over Billy Boy Abbott, who will no doubt come knocking again. Victoria arrives. Travis takes Johnny upstairs. Victoria warns Victor not to butt into her relationship with Travis. Victor muses that he’s certainly preferable to Billy. She assures him Billy won’t be in her life romantically again.

At home, Jack flashes to Phyllis’ fall. John’s ghost appears and clucks that it’s a shame what’s happened to his family. Jack blames Billy, whom he doesn’t consider family now. John admits Billy made a grievous mistake, but he has to forgive him. Jack won’t forgive him. John reminds Jack he forgave him for losing his company to Victor, and for sleeping with Jill. He wants Jack to be the man he knows he can be, as Billy rings the doorbell. Billy updates Jack on Phyllis and wants to make amends. “You need to as well.” Billy apologizes for the affair. He’s doing this for Phyllis – he wants Jack to forgive her and is removing himself from the equation. Billy admits he wanted a future with her, but says the only person she wanted when she woke up was Jack. He advises Jack not to waste his chance to be happy. After, Jack gets a call from Summer asking him to come and see Phyllis.

At the Club bar, Victor encounters Jill. They discuss the situation with Jack, Billy, and Phyllis. Victor opines that Victoria doesn’t need Billy coming around again. Jill concedes that Billy’s made a royal hash of things, but still thinks he and Vikki belong together. Victor says he’s been replaced by Travis. Victor mocks her for amateurish attempt at offering him a job. Jill sniffs that he’ll probably offer him one to keep an eye on him. Victor grins; it’s a hell of an idea. Upstairs, Devon and Hilary are dismayed to see GC Buzz has aired the Jack footage as well as Devon offering a bribe.

Billy arrives at the Father Knows Best house and apologizes to them for the other night. He gives his blessing to Travis moving in and asks to tuck in the kids. Upstairs, Billy tells Johnny a story about the house where his kids live being the best place and making them proud. Downstairs, Vikki tells Travis that Billy crashes and then makes promises and resolutions. Billy appears and says goodnight.

At the hospital, Summer tells Phyllis that Jack’s not coming.

At home, Jack watches the GC Buzz footage and throws the laptop at the fireplace.

Devon says to a GC Buzz producer, “I understand you own the production company that produces GC Buzz.” The guy says, “You tryin’ to bribe my reporter?”

Travis sits across from Victor and asks, “So what’s the offer?” Victor tosses a paper over and asks, “Do you think this will keep my daughter happy?” Just then, Billy and Victoria appear.