Friday September 23, 2016: Jack is questioned, Kevin and Chloe share a kiss, and Mariah hangs out with Chelsea. 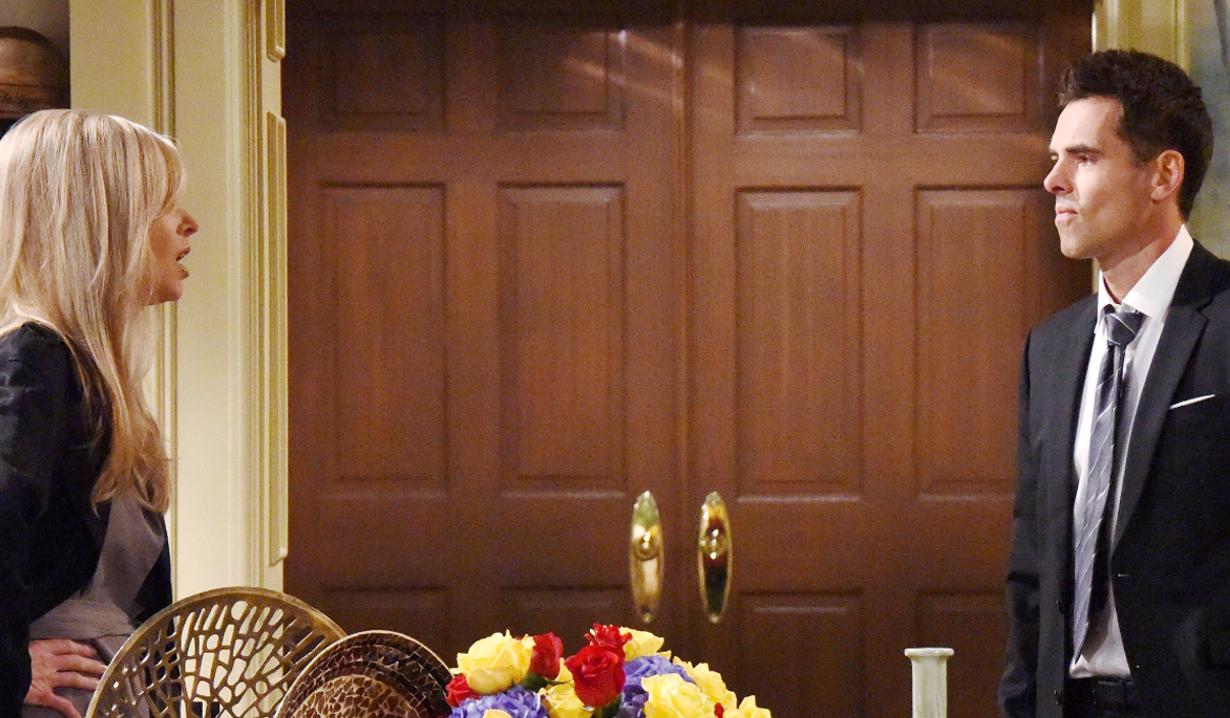 At the Abbott mansion, Jack sputters to Billy that Phyllis fell and hit her head, “It was an accident!” Billy kneels and hollers at Jack to stay away from her. Jack protests – he’d never hurt her. He asks Phyllis if she can hear him as Billy calls for help.

At the station, Dylan and Paul get calls simultaneously. Paul says a woman is unconscious at the Abbott estate. Kevin asks, “Phyllis?” Paul isn’t sure.

Dylan arrives at the Abbott mansion as Billy tells Jack he has no business going with Phyllis in the ambulance after what he did. Dylan holds Billy back to get the scoop. Billy says he saw Jack and Phyllis arguing on the stairs and Phyllis came rolling down and must have hit her head.

On the Chancellor Park patio, Mariah tells Faith that Chelsea has invited her to spend the night at the penthouse. Faith lets it slip that she heard Chloe has a date with Kevin. Soon, Kevin appears. Faith grills him about his date. Mariah sends her for a donut, and reminds Kevin that Chloe was moving on without him. Kevin wants to be in her life. Talk turns to Bella’s dad, and the discrepancies in Chloe’s stories. Kevin isn’t concerned.

At the penthouse, Chelsea has Chloe try on a dress for her dinner with Kevin. They discuss the Abbott drama. Chloe feels bad for Billy, who gets blamed for everything. She thinks he’s a survivor and an excellent father. Chelsea counters there’s no excuse for his current situation. Chloe feels there’s blame to go around. Later, Kevin arrives and Chelsea subtly warns him not to mess this up. He and Chloe leave. Chelsea looks at a photo of herself and Adam. Mariah arrives with Faith, who heads upstairs. Chelsea invites Mariah to stay. Talk turns to Sully. Chelsea thinks he has a special bond with Nick. Over ice cream, they discuss Kevin and Chloe’s dinner. Mariah admits she cares about him and doesn’t want him hurt. Chelsea thinks Chloe is trying to figure out what’s important to her.

In the hospital elevator, Jack tells the unconscious Phyllis that Summer’s on her way. Stitch takes over.

In the Club dining room, Ashley informs Abby that both her brothers need to run as far away from Phyllis as they can. Abby reassures Ashley about her decision to spill the beans to Jack that Billy loved Phyllis. Ash notes her own life is empty. Abby hints that the spark is gone in her own relationship. Ben calls to tell her Jack needs support at the hospital. Later, Chloe and Kevin toast to new beginnings. Kevin had the chef make them something special. Chloe feels weird, but laughs when it’s cheeseburgers. Kevin regrets they didn’t do this sooner. Chloe is tipsy and they kiss.

Summer arrives at the hospital, where Jack admits Phyllis’ accident happened while they were fighting. Summer frets and Jack lets her know he still cares. In her hospital bed, Phyllis comes around as Stitch hovers. She mutters about Jack and acts panicky. In the waiting room, Ashley and Abby join Jack and Summer and get in the loop. Elsewhere, Dylan has Billy repeat his story to Paul. Stitch appears and reports that Phyllis had to be sedated – she was agitated and he wonders if it was an accident at all. Stitch moves to the waiting area, and tells the Abbotts and Summer it’s a waiting game. Paul and Dylan ask Jack for a word. In a room, Jack tells Paul and Dylan he was furious with Phyllis, but would never hurt her. He was however, mad enough to cause bodily harm to the man who caused all of this – Victor. After, Paul and Dylan doubt Jack hurt Phyllis. Dylan harps about Victor. Paul wants him to focus on Phyllis. Ashley finds Billy looking in at Phyllis. He vows to make Jack suffer for this. Stitch lets Billy go in. Billy tells Phyllis he’s there for her and won’t leave. Jack looks in. Meanwhile, Stitch shares an awkward moment with Abby. In Phyllis’ room, Billy holds her hand and kisses it. She wakes up. “Welcome back, Sleeping Beauty.”

A reporter tells Jack there’s a rumor that he beat up his wife.

Victoria says to Jill, “I want you to get it through your insanely thick skull that Billy and I are never getting back together.”

Billy tells Phyllis, in a hospital bed, “If you look into your heart you will find the truth, that you love me too, and we can still be together.”

Y&R Day Ahead Recap: Victoria has an...