Y&R Day Ahead Recap: Victoria has an epiphany about her love life 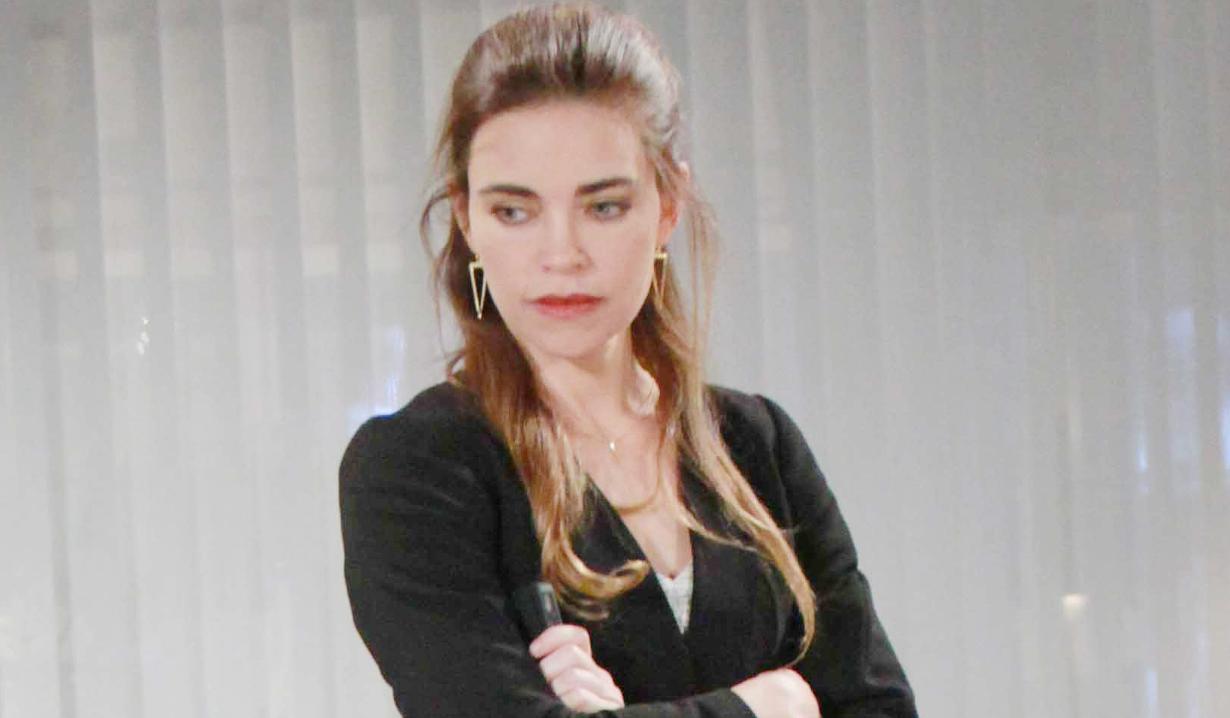 In the Club office, Ashley and Neil try to talk Jack out of quitting the foundation. Jack has lost his faith thanks to Billy, who is a lost cause. Billy calls out Jack for sleeping with Jill when she was married to John and tells him to stop playing the martyr. Billy wants his brother to acknowledge his role in how they got here – Jack pushed Phyllis away and was more interested in making peace with Victor. “Phyllis loved me, Jack.” Jack lunges at him. Neil and Devon intervene. Ash takes Billy out. Hilary arrives and Devon fills her in on Jack quitting. As Neil tries unsuccessfully to persuade Jack to stay on, Hilary says she’ll see what she can do. Lily questions Hil running after Jack. Devon defends her, but Lily reminds him the fastest way for her to climb the social ladder is to go for Jack. Devon wonders what’s to stop Lily from cheating on Cane again – do people deserve a second-chance or not? Lily thinks it’s different. Devon has no doubts about his wife. Downstairs, Nikki informs Phyllis that Jack came out to the ranch to declare war on Victor. Nikki worries Phyllis will still be after revenge. Phyllis just wants to finish her drink in peace, and assures Nikki she’s realized her desire for retaliation has cost her everything. Nikki counsels Phyllis on how to rebuild a marriage – the Phyllis she knows wouldn’t give up.

At Brash & Sassy, Victor reassures Travis that she’s not jealous of Billy and Phyllis. Travis thinks he should give her space to figure things out. He needs to get a place of his own and a job, but they’ll still be together. Victoria agrees, if he thinks it’s best. Meanwhile, Hilary joins Jack in his office at Jabot – she thinks he could use a friend. Jack scoffs at her efforts considering she cheated on Neil and left him for Devon. Hil knows Phyllis is punishing herself. Jack says Phyllis lied and cheated for months, and Billy can’t come back from this; he can rot in hell. Later, Nikki finds Victoria in the lab and clucks over the latest development with Travis. Vikki admits Billy being with Phyllis bothers her a little because that door is finally closed, but mostly she’s angry with herself for letting them keep her from being more deeply invested with Travis, who just gets her. Nikki thinks she should be telling Travis.

Victoria finds Travis packing his things at her house and tells him she doesn’t need space or time to figure things out. She’s held back because of her past with Billy, but Travis is her present and hopefully her future too. Vikki asks him to put his stuff away and make this his home, with her and the kids. Travis grins. “Is that an order?”

At the Chancellor estate, Billy and Ashley argue about Jack not sharing Phyllis’ need for revenge causing problems in their marriage. Billy accuses her of always being on Jack’s side. Ash thinks Jack has cause to lash out. She warns him to avoid their brother…and Phyllis. They keep arguing. Ash tells him not to call for her help the next time he hits rock bottom and storms out. Billy pours a drink. Neil arrives to talk to him about his downward spiral. He reminds him he started over after Delia’s death. Billy muses that he blew it apart again…maybe Jack is right about him. Neil suggests he start working the steps.

Phyllis arrives at the Abbott mansion. She calls out Jack’s name and then flashes to him proposing before sitting on the staircase. Jack arrives and tells her he quit the foundation. Phyllis wants to take full responsibility for her mistakes. Jack points out she doesn’t have much choice. Phyllis asks for his forgiveness. Jack sneers that he forgives her – now she can get on with her life. They debate if the marriage is done, and Jack orders her to get out of the house…now. The keep arguing as they ascend the stairs. Phyllis grabs Jack’s arm and he wrenches free. She tumbles down the stairs. Billy enters. “What did you do to her?”

Nikki finds Ashley at Jabot to check in about Jack and Billy. Ashley won’t be helping Billy; she’s concerned with Jack. Nikki shares that she counseled Phyllis not to give up hope. Ash says that’s the worst thing she could have done. She feels Jack should say goodbye to Phyllis and never look back.

Neil returns to the Club and discusses Jack and Billy with Lily, Hilary, and Devon. Hil is worried about what Jack will do next.

Ashley tells Abby, “Both of my brothers need to run as far away from her as they can and never look back.”

Dylan listens as Paul tells Kevin, “A woman hit her head; she was unconscious.” Kevin asks, “Why would they call you?” Paul says, “It was at the Abbott estate.” Kevin exclaims, “It was Phyllis?”

As Billy holds a phone, Jack leans over an unconscious Phyllis. “Phyllis, can you hear me?”