Y&R Day Ahead Recap: Jack makes a shocking announcement to the board

Wednesday September 21, 2016: Phyllis makes a statement, Jill has an offer for Travis, and Ashley goes off on Phyllis. 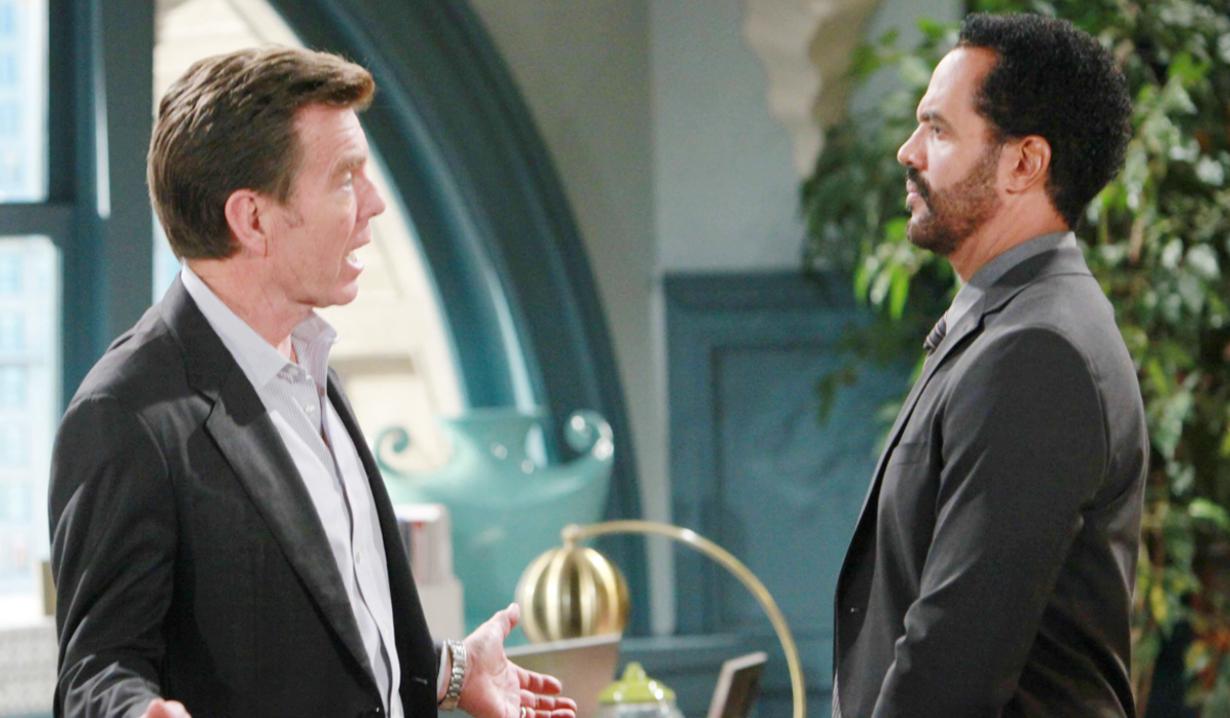 Jill ‘runs into’ a sweaty Travis in the park. She’s done her research on him and offers him a position overseeing several divisions at Chancellor. Travis supposes he’d be based someplace like Hong Kong – or as far from Victoria as possible. They spar verbally. Jill gives a throaty chuckle – she’s offering him adventure and challenge. Travis will pass. He teases her about the price tag on her shoes as he leaves.

Jack, sporting an intense new look, strides into Jabot, orders Phyllis’ things boxed up and demands the files on Newman Enterprises. Upon entering his office, he sees ‘Phyllis loves Jack’scrawled on the wall. Ash arrives and learns that Jack’s out for revenge on everyone involved, which concerns her. Down at Brash & Sassy, Billy and Victoria argue, but won’t let Cane intervene and make a decision. Outside, a GC Buzz reporter follows Phyllis. She decides to give him the gory details. Inside, Victoria’s phone bings. She says Phyllis is about to give a statement on GC Buzz. In Jack’s office, he is notified as well.

At the Club, Neil, Devon, and Lily discuss the media circus since Jack’s outburst. Neil hopes the foundation will be okay. They learn Phyllis is about to give a statement and tune in as she admits to making a mistake and asks the press to leave the loving and honest Jack Abbott out of this. She declares she’s committed to healing her marriage and signs off. Lily feels encouraged that the spotlight’s off the foundation.

Phyllis enters Jabot’s side door. Upstairs, Jack tells Ashley she was right about what he does next. She’s encouraged when he plans a foundation meeting. At Brash & Sassy, Victoria observes that Phyllis called Billy a mistake. He reveals that they loved each other, and had planned to be together until Jill found out and blackmailed Phyllis…because she wanted him with Victoria. Travis arrives. Billy exits. Travis asks what happened. Still stunned, Victoria explains. Travis is puzzled over her reaction and wonders what if Billy did love Phyllis? Victoria says he didn’t. Travis wonders why – because he still loves her and that’s how she wants it? Victoria assures him she’s all in with him, but Travis feels she’s still tied to Billy in some way she’s afraid to admit. Meanwhile, Phyllis meets Summer by the Jabot elevators. Summer won’t go off on her anymore, and offers to talk to Jack for her. Summer joins Ashley and Jack. She and Jack embrace. Summer is dismayed when Jack announces he’s divorcing Phyllis.

In the Club, Ashley tells Devon, Neil, and Lily that Jack will be along soon for the foundation meeting. Phyllis appears. Ash tries to get rid of her. The others go to the boardroom, and Ash lashes out at Phyllis until Billy appears and intervenes. Ash wonders which of them can sink the lowest and then joins the others. Billy confronts Phyllis about saying they were a mistake – she knows it wasn’t. Phyllis is explaining that she had to tell the press something when Jack appears. Billy goes to the boardroom and Jack gripes to Phyllis about her statement to the tabloid. He fires her from the board. “We’re done. Done!” After, Jack begins the board meeting by apologizing, but then declares that the foundation is nothing more than a fraud – people revert to type 9 times out of 10. “Right, Billy?” Billy mutters about Jack being perfect. Jack makes a speech about his plan to live a life of decency and kindness and it got him a lying, cheating wife and a backstabbing brother. He announces the old Jack is back and he’s done with the foundation and everything it stands for. In the dining room, Cane reports to Jill on Billy and Victoria’s relentless arguing. He shows her Phyllis’ interview and warns there will be casualties.

Related: The many faces of Adam Newman

Back at Jabot, Phyllis is carrying her box out when she sees maintenance cleaning the wall.

Phyllis returns to the Club and sits at the bar. Jill approaches to taunt her. Phyllis suggests Jill leave Billy alone, and says she’ll fight to get back to Jack.

A reporter tells Jack there’s a rumor that he beat up his wife.

Victoria says to Jill, “I want you to get it through your insanely thick skull that Billy and I are never getting back together.”

Billy tells Phyllis, in a hospital bed, “If you look into your heart you will find the truth, that you love me too, and we can still be together.”

Y&R Day Ahead Recap: Victoria has an...