Monday September 19, 2016: Summer takes Jack’s side against her mother, Travis intervenes between Victoria and Billy, and Neil counsels Jack. 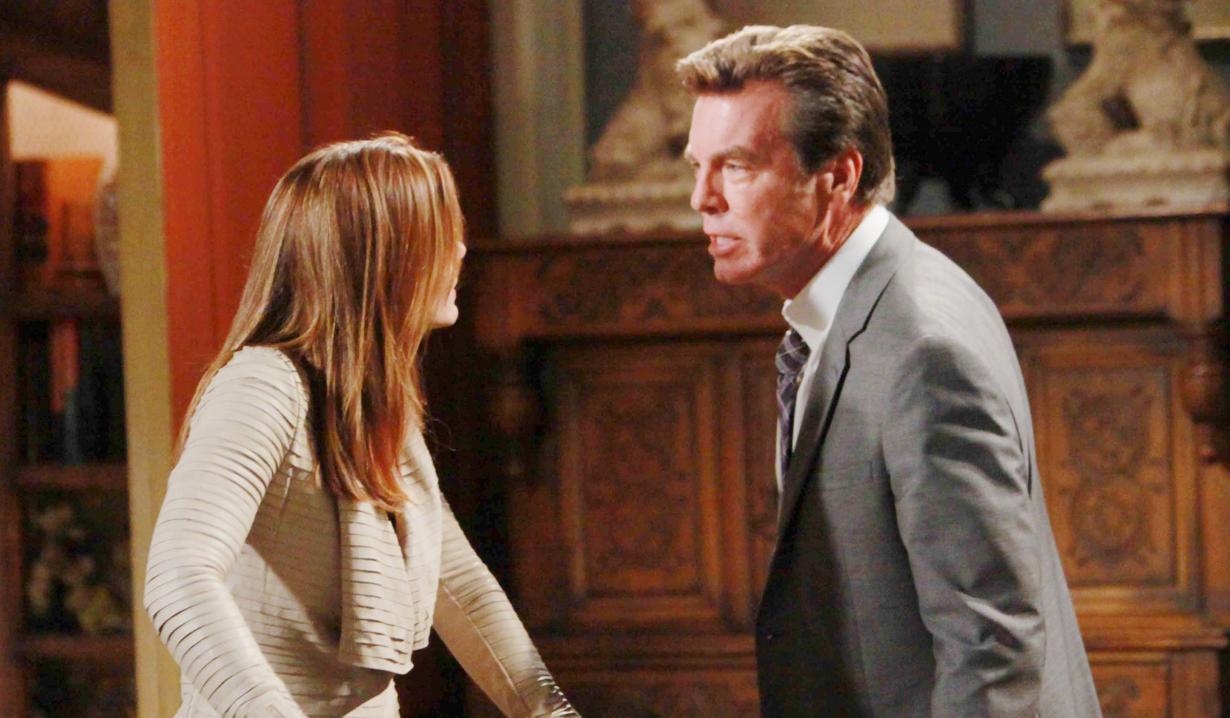 Summer meets Nick at the Club – she’s heard about Phyllis since social media blew up last night, but is more concerned about Jack. Phyllis comes down the stairs. A reporter asks her why she slept with her husband’s brother. They press hounds her until Nick takes them to the corner and lectures them about capitalizing on someone’s pain. Summer yells at Phyllis for creating this situation, and doesn’t want to talk to her. She rants at Phyllis for mistreating Jack and calls her a world-class hypocrite. In the office, Neil, Devon, Lily, and Cane discuss the impact of the interview on the foundation. Talk turns to cheating and how irrational it can make a person. Neil relives confronting Devon and Hilary on the plane. Neil plans to support Jack. Lily, Cane, and Devon head downstairs and help Nick with the reporter, who threatens to air Lily’s family’s dirty laundry before finally packing it in. At the bar, Summer continues to chastise Phyllis. She tells her mother Jack is too good for her. “You don’t deserve him.” After, Phyllis tells Nick, “She’s right.”

Jill is watching a clip of Jack’s interview on TV when he arrives at the Chancellor estate. Jill says she’s sorry. He asks why she didn’t tell him, and calls her a coward. Jill didn’t want him to get hurt and was looking out for her son. Jack knows she blackmailed Phyllis and isn’t buying her concern for him. He vows she’ll pay for this betrayal. Jill argues her case, but Jack hollers that she let him go on living a lie! Jack meant his threat.

At the Father Knows Best house, Billy isn’t in the mood to bicker with Victoria about the kids and asks Travis to butt out. He tells Victoria that regardless of the scandal, he’s still their father. Vikki insists she’s protecting them from the media circus. Billy wonders if she wants to play ‘who’s the better parent?’ – she didn’t even know who Katie’s father was! Travis intervenes. He orders Billy to walk out the door…now. Billy warns this isn’t over and goes. After, Travis explains he intervened because their voices were carrying up the stairs and he agreed with her about kids being exposed to the media. Victoria admits she’s worried. Vikki gets a call from Jill, who demands she come to work.

Jack meets with Neil in the Club office and offers to step down from the foundation. Neil knows what he’s experiencing and counsels him against seeking revenge. Jack admits he wants to hurt them. Neil warns him about the temptation to ‘use’. Jack exits. In the dining room, Nick is supportive of Phyllis and they rehash their affair after Cassie died. Phyllis talks about how Billy was there for her. Nick advises her to fight for her marriage. Nearby, Cane takes a call from Jill summoning him to Brash & Sassy. Lily chews to Devon about Jack going public with his drama, and is worried about the impact on Neil and the foundation. Neil appears and reassures them.

At Brash & Sassy, Travis kisses Victoria goodbye and Cane joins her. Jill appears and grouses about a commercial. Billy arrives. A very tense meeting ensues. Victoria announces she can’t work with Billy. He doesn’t want to work with her either.

At the park, Summer flashes to her conversation with Phyllis when she had separated from Jack and moved into the Club. Nick appears and tries to give her some perspective. He tells her if she were the adult she claims to be, she’d understand this isn’t black and white. Summer is firmly on Jack’s side and doesn’t know why she’s trying to explain it to Nick, who cheated with her mother too. Nick doesn’t regret it because they had her.

Jack finds Phyllis waiting at the Abbott mansion. She needs her husband to understand why this happened. Jack snarks about how blind and stupid he was, and Phyllis argues he’s the best man she knows. Jack wants her out of his life. “Get out of my company and give me a divorce.”

Kevin tells Michael, “I think Chloe’s hiding something. Something huge.”

Jill says to Victoria, “Letting Billy stew in it is a huge mistake, and it’s one you can’t afford to make.”

Phyllis cries to Jack, “Don’t give up on us!” Jack intones, “Why not? You sure as hell did.”

On Monday, A New Twist On The Quest For Sealed Testimony In The Polanski Case