Y&R Day Ahead Recap: Jack leaves Phyllis sobbing after she tells all

Friday September 16, 2016: Victoria finds out about the affair, Cane shares his plans with Lily, and Neil and Jack’s interview takes a nasty turn. 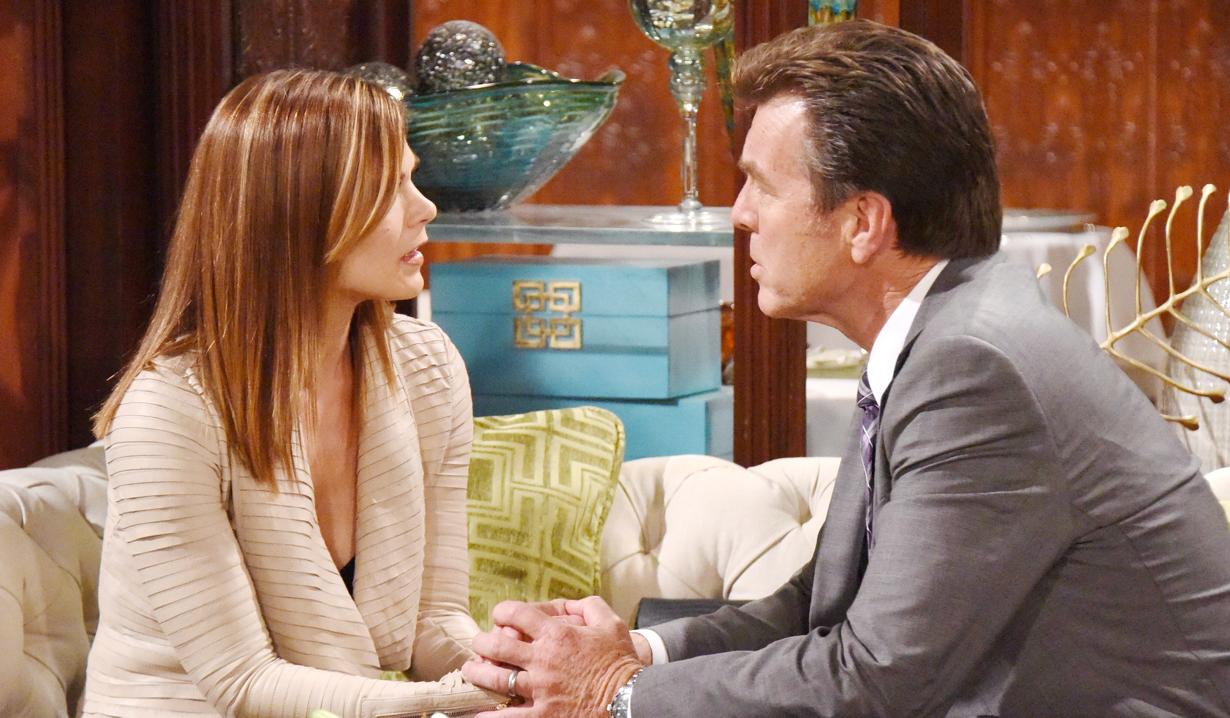 At the Abbott mansion, Jack hollers at Phyllis, demanding to know if she slept with Billy. She admits she did. Jack wants to know how long it went on…when, where, how many times? “I want answers!” Phyllis tells him it began during the storm. Jack rants. It all becomes clear – the times she wouldn’t answer the phone, and when she couldn’t make love to him on his birthday. Jack cries when she confirms she was with Billy at the cabin. Phyllis protests she was messed up. Jack states that she needed someone else because he was no longer enough. He didn’t think it could get worse than her cheating on him with Nick, but his own brother? Phyllis says they wanted to tell him. Jack sneers at that and calls her a coward. Phyllis confesses that Jill found out. Jack realizes she broke things off with Billy because she had to…not because she wanted to. Phyllis insists the affair had to end because her marriage meant too much. Jack forces her to admit she loved Billy. He tells her she destroyed their marriage and leaves her sobbing.

At Jabot, Ashley informs Billy that the minute he and Phyllis gave in to their feelings, Jack’s marriage was doomed, whether or not he found out about it. Billy will have to live with that. Billy complains she’s always on Jack’s side. Ash points out he makes it hard to be on his side. Billy feels she doesn’t get him. He writes ‘Phyllis loves Jack’ on the wall and storms out. Down at Brash & Sassy, Cane, Victoria, and Travis are stunned to see the office has been trashed. Cane muses that Billy must have had a party and leaves. Victoria expresses her irritation with Billy to Travis, who holds up a bra. They move to the lab and Billy appears. Victoria confronts him about the mess. Billy asks about Seattle. Victoria steps out for a call, and Travis calls Billy out for acting like a jackass. Travis heads downstairs and Victoria questions Billy about what’s going on with him. When she crouches down to get her bag, Phyllis enters and informs Billy that Jack knows about them. Victoria stands up. She realizes they’ve had an affair and lashes out at them both. Victoria declares Billy a complete disappointment to everyone who loves him. Once alone, Phyllis tells Billy that Jack’s done with both of them. Billy thinks they should have told him a long time ago. They agree…they don’t want to fight. Billy is relieved it came out – they could run away together. Phyllis still wants to save her marriage.

In the Club, Neil greets Lily, who tells him the rooftop is prepped for the foundation interview. Neil notes he’s supposed to meet Jack. They rehash the night Neil met with his mother, her surprising revelations, and her untimely death. Neil regrets not reading her letters and plans to talk about his inherited alcoholism in the interview today. Lily’s glad he got closure. Cane arrives and hugs Lily. Neil goes to the rooftop with the reporter, and Lily admires the bracelet Cane bought her. They talk about his successful trip and Victoria and Travis being the real deal. Lily thinks Vikki deserves better than Billy. Lily fills Cane in on what happened with Neil and Lucinda, and then they have champagne. Cane hopes this is his chance to convince Jill to let him run Brash & Sassy. On the rooftop, Ashley arrives and warns Neil that Jack won’t be coming. As Neil prepares to do the interview alone, Jack arrives. Ashley pulls him aside to talk, but he insists on fulfilling his obligation. The interview gets underway. Jack’s talk about addicts turns personal, and he blurts that his brother Billy slept with his wife.

At home, Victoria rants to Travis about Billy’s affair. She worries the kids will get hurt and warns it’s only the beginning of Billy blowing his life apart.

Billy asks Victoria, “Do you really want to play ‘who’s the better parent’ here?” Travis intervenes and tells Billy he needs to turn around and walk out the door…now.

Jill says to Jack, “I never meant for this to happen.” Jack asks, “Then why didn’t you tell me?”

As Summer looks on, a reporter calls out to her mother, “Come on, Phyllis! Why did you sleep with your husband’s brother?”