Y&R Day Ahead Recap: Jack confronts Billy and Phyllis about their affair

Thursday September 15, 2016: Paul tries to get Dylan to back off, Ashley realizes Billy didn’t tell her everything, and Phyllis’ shrink won’t give her what she’s looking for. 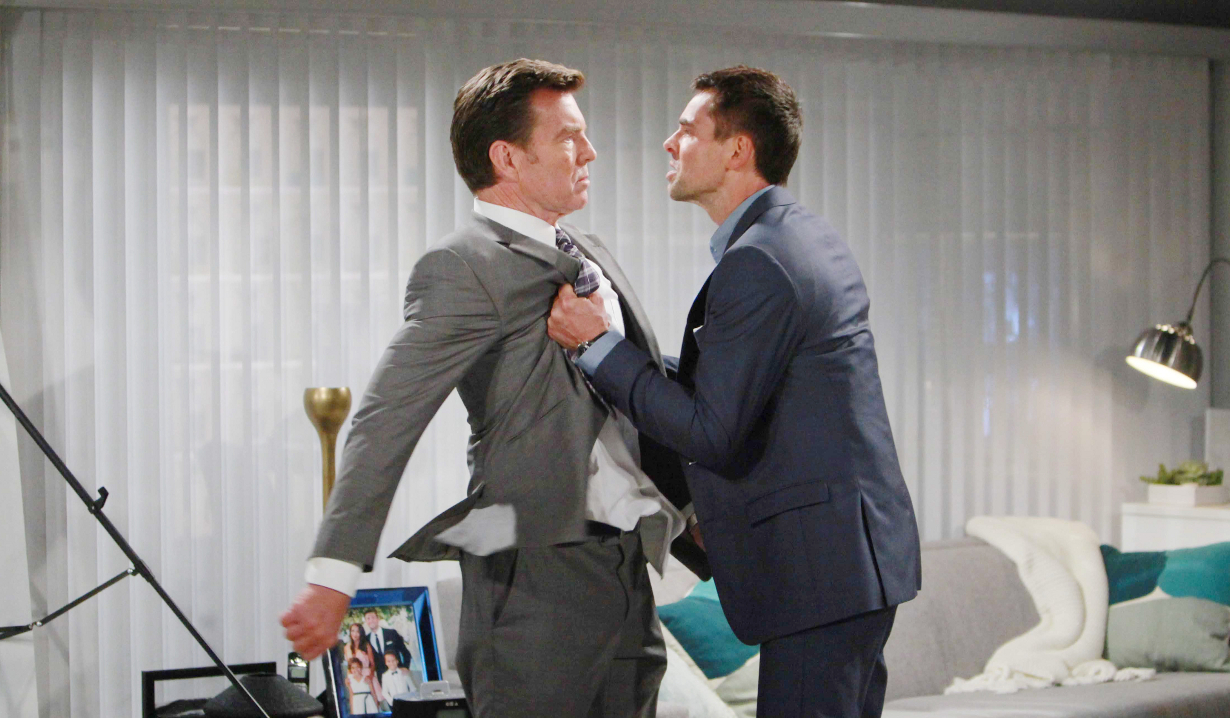 Nikki is reading at home when Paul appears and announces he’s there to pull their son back from the ledge. He fills her in about Dylan and how he wants to protect her from Victor. She remains adamant about her husband’s innocence. Paul suggests she try convincing her son.

At the GCPD, Victor challenges Dylan to arrest him. Dylan refuses to jump the gun. “Be careful boy. You’re accusing me of killing my son,” Victor growls. The cop is determined to keep digging until he gets answers. Victor threatens consequences if he harasses him. He sarcastically offers a confession and declares his love for his son. McAvoy isn’t impressed. Paul gets between them and tells the mustache he’s free to go. Once Newman is gone, Paul tells Dylan this has to end. Father and son argue. Paul tells him to take a step back but Dylan refuses, determined to see Victor go down.

Where are they now? Eddie Cibrian in at Rosewood

Nikki greets Victor when he arrives at home. They discuss her son having it out for him. She doesn’t want to have to choose between the two men. He wishes Adam were around so they could develop a better relationship.

Nikki shows up at the GCPD to see her son. He accuses her of being there to do Victor’s dirty work. She assures him she’s not being manipulated and warns that he’ll have to arrest her and Chelsea if he arrests Victor. He still feels like he’s let Adam down. She challenges him to protect his mother or preserve his integrity.

At the therapist’s office, Phyllis assures her shrink that she’s really ended things with Billy. She could be herself with him but now she feels good about coming clean with Jack. The doctor wonders if she’s prepared to lose her husband and if she’s trying to save her marriage or punish herself. She’s determined that Jack learns the truth from her. There was an affair years ago but they dealt with it. When the topic turns back to Marco, she admits she never questioned his identity. She begs the doctor to tell her what to do. He can’t. She’s annoyed and stomps out.

Announcement: Chuck Pratt out at Y&R

Victor meets with a man at the club and tells him he needs a problem taken care of involving his wife’s son. Paul shows up and assures Newman that what happened earlier won’t happen again. The man hands Paul a restraining order against Dylan.

“Billy said he’s in love with your wife!” Ashley blurts out to Jack at Jabot. Under questioning, she insists that nothing happened and Phyllis broke it off. He’s sure there was more than a ‘friendly attachment’ and storms off. Upstairs, Billy serves some tequila to a model at the Brash & Sassy office. He drinks more and chuckles about the bikini on the desk. “Have you always been a redhead?” he asks. She hasn’t been, but offers to do some roleplaying. They make out on the couch. Jack walks in and sends her out. They bicker about Billy and his bimbos. Jack brings up what their sister said. Billy tries to play it off but his brother wants the truth. Billy admits he’s in love with Phyllis. Jack grabs him and throws him around. “She doesn’t love me, she loves you,” Billy says, telling him to grab his wife and man up. Jack walks out. Panting, Billy chucks a glass and stumbles to the elevator before pushing into Ashley’s office. He tells her she’s ripped the family apart. She realizes he had sex with Phyllis. He says it’s over. She’s not convinced.

Phyllis goes home. Jack lurches out. He knows she went to their therapist alone. He saw her and asks if the shrink helped her find the answers to her Billy problem. When he tells her that Billy confessed to loving her, she insists she put an end to it. Red says it was all a mistake. Her husband demands to know how much she turned to his brother. “Did you go to bed with him?” he demands.

“When you said you wanted to show me the office, this is not what I expected,” Travis says to Victoria as they look at the mess at Brash & Sassy. “You and me both,” she says.

“The moment that you and Phyllis gave into each other, Jack’s marriage was doomed, whether or not he ever found out about it,” Ash tells Billy.

“Yes or no Phyllis? Yes or no?” Jack demands from her.