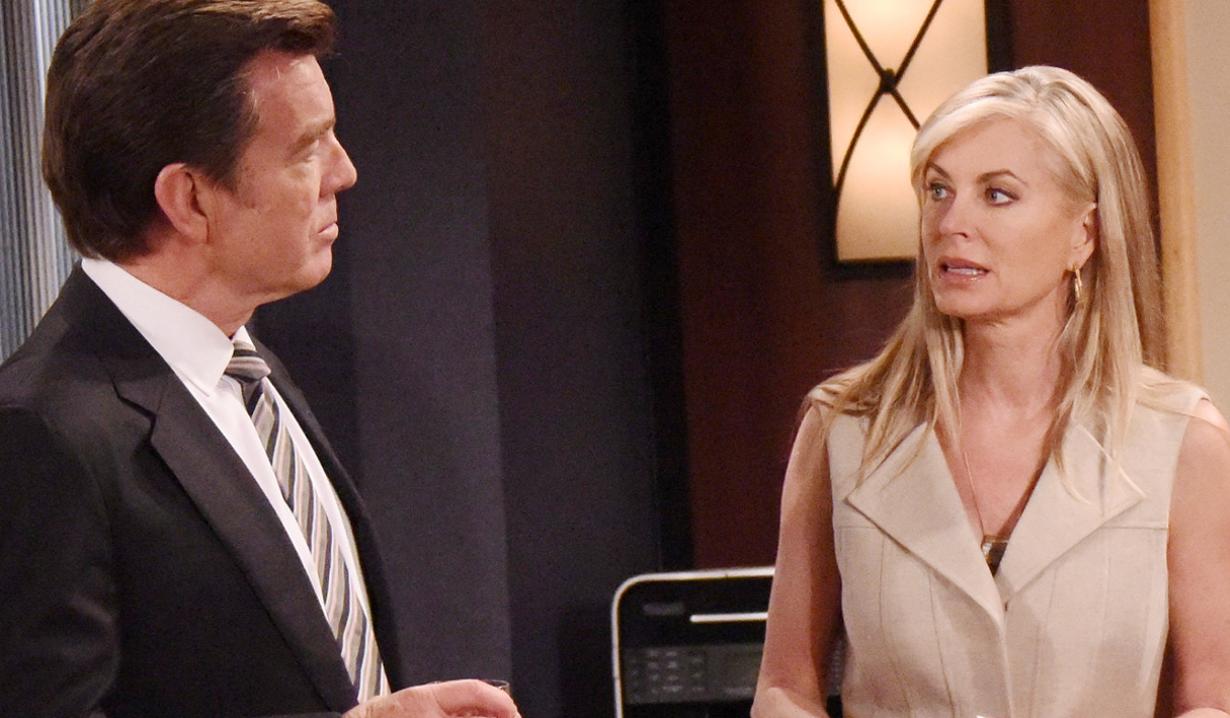 Ashley finds Billy taking pictures of a group of scantily clad models at Brash & Sassy. She announces playtime’s over and sends the models packing. Billy pours a shot and bickers with Ashley, who asks, “Who is she?” Billy denies anything. Ash rephrases the question. “What’s going on with you and Phyllis?” She cites their connection at the dinner the other night. Billy calls her crazy. Ashley realizes she’s right. Billy confirms it. Ashley starts to panic. Billy explains how they came to connect, but lies that it was only emotional. He informs Ash it’s over as of yesterday. Ashley notes he’s drinking in the middle of the day. She asks for more details. Billy says Phyllis ended it. Later, the red-haired model returns and Billy invites her to drink tequila.

Jill corners Phyllis at the Club – she knows she broke it off with Billy. Phyllis needles her about her real goal – getting Billy and Victoria back together, which isn’t going to happen. Jill insists she’s his one true love. Upstairs, Colin contemplates Jack’s cash. Jack demands answers. Colin covers up the money and announces he loves money, but loves his marriage more. He tells Jack he was lying about Phyllis – what part of the lie made any kind of sense? Jack looks deeply thoughtful. Downstairs, Jack confirms to Jill that Colin confessed to scheming. He then joins Phyllis and tells her about his dealings with Colin. He apologizes for doubting her and they agree to go back to therapy and be honest even if it hurts. Upstairs, Colin recounts his meeting with Jack to Jill, who scoffs at first, but is then moved by him putting their marriage first.

Spotlight on: Ray Wise’s guest role on The Young and the Restless

At Crimson Lights, Sharon thanks Chloe for her help with Chelsea. They discuss Victor’s dealings with Adam. Sharon points out he tried to help. “Isn’t he the good guy here?” Dylan appears and wants to hear Chloe’s response. He still believes Adam would be alive if not for Victor, and plans to get to the truth. Sharon is exasperated. Dylan offers to take her back to Chelsea’s studio to clear the air. After, Kevin appears and makes plans with Chloe for later. She admires how much he loves Bella.

Chelsea is crying in her studio when Victor enters. He announces he’s giving her back his 35% stake in her company. Chelsea wonders why. Victor claims it will give him peace of mind. He produces the paperwork. Chelsea informs him this won’t bring Adam back or help her figure out how to get up in the morning. Victor’s sorry. She concedes it’s a start, and thanks him, but also lets him know this means he’s out of their lives. Sharon and Dylan arrive as Victor exits. Sharon and Chelsea clear the air. Dylan wonders about her friendly conversation with Victor. Chelsea explains. Dylan muses about Victor paying his debts. When he questions whether Adam’s death was really an accident, Chelsea snaps at him not to dare do this to her. They argue and Chelsea asks him to see himself out. Sharon chastises him on his way out, then promises Chelsea she’ll stay on him to back off.

Announcement: Chuck Pratt out at Y&R

Victor meets Chloe at Crimson Lights and she’s upset about Dylan not dropping the investigation. Victor tells her to leave it to him.

At the penthouse, Kevin brings Chloe a toy for Bella and wonders why her dad isn’t involved. He realizes she never told him about her. Chloe shuts down his questions.

At the station, Dylan is puzzling over the case when Victor appears. They spar verbally. Victor invites him to ask whatever he likes.

Phyllis meets with the marriage counselor alone and confesses to her affair.

At Jabot, Jack notices Ashley is trying to get away from him. She claims she’s fine, but Jack knows she’s not. He closes the door. “What are you not telling me?” He realizes it’s something about Billy and is about to go confront him when Ash blurts, “Billy said he’s in love with Phyllis!”

Paul tells Nikki, “This is about our son. I’m here to pull Dylan back from the ledge.”

Victor warns Dylan. “Be careful, boy. You’re accusing me of killing my son.”

Chelsea snaps on Sharon, and Jack...