Y&R Day Ahead Recap for Friday September 9, 2016: Summer has unfinished business with Luca, Sharon flips out over Dylan pursuing Victor, and Abby’s had a change of heart. 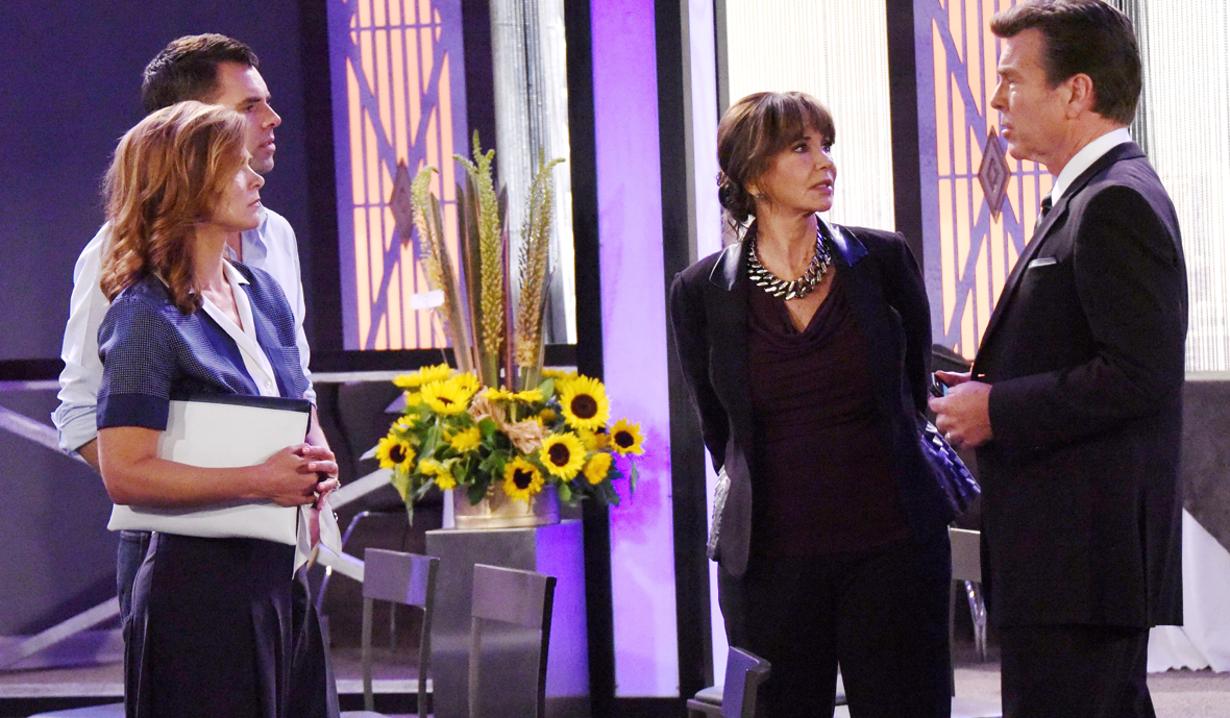 At the Top of the Tower, Jack tells Phyllis he’s glad she stayed away from the memorial. When Jack takes a call, Jill complains about Phyllis not supporting Jack. Jack takes Billy aside and Jill hisses at Phyllis about how obvious it is she and Billy just had sex. She warns Ashley’s getting suspicious too. Nearby, Jack tells Billy he’s glad Phyllis was with him instead of doing something she’d regret. Billy’s expression makes Jack wonder if she already has. Billy reassures him and then takes off, with Jill behind him. Jack informs Phyllis he knows what’s been going on, but won’t discuss it there.

In the hospital, Abby talks to Stitch about Adam’s memorial. Stitch worries about not being there for her and says they need to talk. Dylan appears. He needs Stitch’s help off the record. Abby goes. Dylan tells Stitch he needs a follow-up done on the DNA analysis from the cabin – it was too rushed, too quick. Stitch realizes Dylan thinks maybe Adam didn’t die and agrees to help.

At the station, Paul takes Summer’s statement about Luca. He tells her Luca’s still in holding. Summer sees Luca as she’s leaving. He tells her he loved her, and knows she loved him. Summer says he was working her – it was all an act to take down her family. Luca’s sorry. Summer’s done. Luca grabs her and admits he had a plan to use her, but didn’t expect to fall in love with her. Ruining what they could have had is his biggest regret. Summer tells him she could never hate him as he’s taken away. After, Dylan arrives, and Paul calls him out for continuing to work on the Adam case. Dylan thinks Paul knows he’s right. They bicker at length. Paul doesn’t want to see Dylan end up like Adam. Dylan’s not intimidated.

At Sharon’s place, she frets to Mariah about Victor seeking revenge on Dylan and maybe even finding out that Sully is Christian. Mariah realizes Sharon thinks she is the weak link. Sharon just knows how ruthless Victor can be. Mariah feels Sharon is going off the rails and tries to reassure her. Sharon’s still worried – Dylan’s not going to give up on trying to nail Victor. Mariah is certain Dylan will come up empty and warns Sharon about her fears becoming a self-fulfilling prophecy. Stitch arrives. Mariah leaves. Sharon guesses the information Stitch has for Dylan is about Adam’s case. Dylan arrives in time to hear her ask Stitch not to help him because going after Victor is like poking a mad dog with a stick. Dylan interrupts. Stitch tells him his forensic results confirm Adam died in the explosion. Dylan questions if he even took it to the lab. Stitch advises him to let it go. After, Dylan argues with Sharon about going after Victor. She shouts at him to think about what they have to lose. Dylan feels Victor can’t hurt them. Sharon says he’s wrong.

Summer runs into Abby at the coffeehouse and tells her she saw Luca. Abby tears up. She confides that her marriage has become about ‘dealing’. She’s concerned Ben doesn’t want to continue on this way, and isn’t sure she wants to either. Abby changed after the miscarriage – she dreads talking to the man she once loved with all her heart. Later, Mariah arrives. She and Summer talk about Luca and Kevin. Mariah’s impressed when ‘Snowflake’ throws shade at her.

At the Club, Abby and Stitch discuss the distance between them. Ben surprises her by saying he’s ready for another baby.

In the park, Jack tells Phyllis he realized something about her relationship with Billy. He goes on about not giving her the love and support she needed and says he’s abundantly grateful she found it with his brother. He gets emotional over trying to make her act like everything was normal, and notes a part of her looks at him and sees Marco. Phyllis cries. Jack asks her not to stop fighting for them. She feels guilty. Jack assures her she’s done nothing wrong. She sobers. “I’ve been lying to you.”

Jill catches up with Billy at the Chancellor mansion and they argue about her agenda. He confronts her about dangling what she knows over Phyllis’ head. They argue. Billy orders Jill to stay out of his personal life. She won’t. They talk about the affair. Billy brings up Jill’s shady past. She warns him not to deflect. Billy insists she doesn’t understand what they have together. Jill scoffs at him convincing himself he loves Phyllis. Billy yells at Jill to just walk away…like she always has! Shaking and red-faced, Jill goes ballistic over what he’s doing to Jack and how it will tear the family apart. Suddenly she cries out.

Abby tells Stitch, “I don’t think you see the same relationship, in fact I know you don’t.”

Dylan says to Sharon, “If you’re afraid of something just tell me, we can handle it. You’ve got to talk to me.”