Y&R Day Ahead Recap for Friday September 2, 2016: Victor spars verbally with Travis, Dylan and Paul tail Chelsea, and Chloe resurfaces at the penthouse. 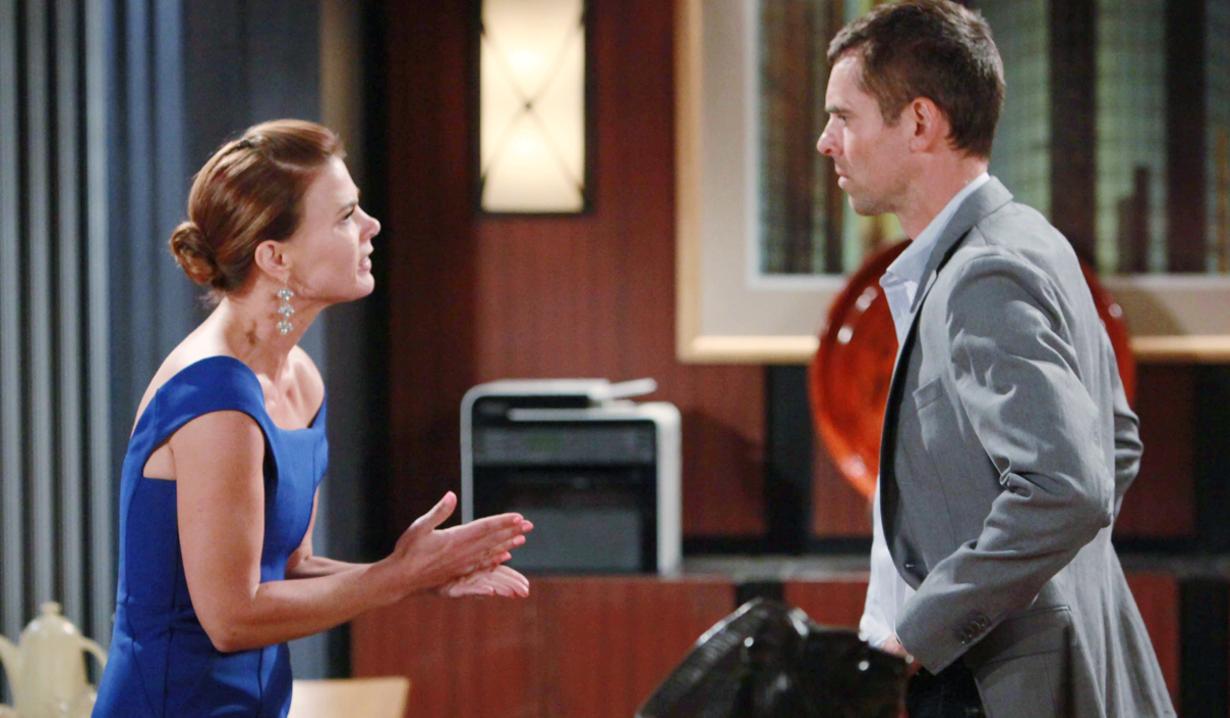 In the station, Dylan is keen to follow up the car lead and hopes to pin this all on Victor. Paul calls Kevin, at the penthouse, to help with the search.

At the cabin explosion, Nick tells Connor he’ll be right back and exits the car. He grabs Chelsea as she hysterically screams for Adam. A woman appears. She didn’t see what happened. Chelsea is frantic over Adam and hopes he got her voicemail and left for the plane. She tries his phone as Nick stresses that they need to get out of there.

Dylan and Paul bust into the hotel room where the doctor treated Connor. They find evidence that they were there and realize Connor was sick. Paul gets a call. He tells Dylan there was a cabin explosion and a witness saw a man, woman, and child.

At the airstrip, Chelsea is distraught to learn that Adam isn’t there. The pilot says time is short. Chelsea wants to return to the cabin to find Adam, but Nick urges her to get on plane without him. They argue. Chelsea paces and wonders if someone did this on purpose. She and Nick both realize only Victor knew where Adam was. Chelsea is ballistic about Victor. She can’t get to him, but Nick can.

At the cabin, Dylan and Paul speak to the neighbor and decide the explosion was a diversionary tactic. Dylan asks the witness where the nearest airstrip is.

As a plane takes off, Paul and Dylan arrive at the airstrip and find Connor’s stuffed dinosaur on the ground.

Victoria and Travis arrive at the ranch to confront Victor about his presumed involvement in the Amber Alert on Connor and Chelsea. Vikki introduces Travis as her boyfriend…and the man who saved Summer from marrying Luca. Victor wonders how much the ‘thank you’ will cost him. Travis informs Victor he can’t be bought. They spar verbally until Victor asks his daughter to take the rather impertinent fellow out. Once alone, Victor tells Nikki he can’t contact Adam and Chelsea and put everything at risk.

At Jabot, Billy presses Phyllis to deal with their situation. She mutters about his mother and he says, “I love you, Phyllis.” Billy tells her Hannah has the kids – they can go away somewhere. Jack appears. He grouses about his frustrating confrontation at the Newman ranch and worries about Adam’s family. Billy thinks Phyllis needs a meal. Jack agrees. Billy says it will be an Abbott family dinner. Ashley appears – that sounds good to her.

In the secret passageway into the penthouse, Chloe huffs and puffs her way into Chelsea’s closet. She changes and heads downstairs where Kevin is trying to track Chelsea and Connor via laptop. Kevin tells Chloe he’s puzzled as there was no sign of Adam in Chelsea’s car. He gets a message about the explosion and says a family matching the description of the on-the-run Newmans was there. Later, Chloe checks the laptop and flashes to putting a tracking device in Connor’s dinosaur. Suddenly, Chelsea appears from upstairs. She says Connor’s fine, but Adam… She breaks down recounting the story. Kevin assures her they’ll find Adam as Paul bangs on the door.

At the Club, Ashley encourages Billy to call Victoria to join them. Billy gripes about Jill forcing them to work together in hopes of reconciliation. Ashley points out he could have quit…unless Jill is holding something over his head. Phyllis gapes as Billy says that’s exactly what she’s doing. Jack wants to know what it is. Phyllis tries to change the subject. Ashley won’t let it go. Billy says Jill creates problems, and alludes to being in love with someone else. When Ash presses, Billy says he meant Victoria, who’s in love with Travis. On cue, Victoria and Travis arrive. Vikki assures Travis he’ll get used to seeing people she knows everywhere. They canoodle. Victoria is dismayed to hear Billy accused Travis of wanting her as a Sugar Mama. Travis laughs it off. They decide to get out of there. Back at the Abbott table, Billy manages to convince Ashley he’s genuinely thrilled for Victoria. Now he can move on and focus on what he wants. Billy assures Ash that’s not Bethany. Ash excuses herself. Jack raises a toast to Billy getting everything he wants, and then leaves to make a call. Phyllis asks Billy what the hell he’s doing. He thinks she’s as turned on as he is. Phyllis hates herself. Billy does too, but can’t stop. They hold hands under the table. By the door, Ash sees Jack hang up, looking shocked.

A disgusted Nick arrives at the ranch and declares that Adam’s dead. He references the cabin exploding and asks Victor how he could kill his own son.

Neil really wants to bring the entire family to see his mother, but she tells him, “Son, that’s not going to happen.”

Kevin lets Paul and Dylan into the penthouse. Paul wonders if they caught him at a bad time and says they’re looking for Chelsea. Chelsea hides on the stairs.

In a car, Victor says to Chloe, “You vicious little…” Chloe cuts him off. “Save it. You’re going to want to hear this.”

Chloe enacts her most nefarious plan...

Neil and Chelsea’s worlds are...