Y&R Day Ahead Recap for Wednesday August 24, 2016: Phyllis imagines marrying Billy, Victoria opens up to her ex about Travis, and Neil is accused of lying. 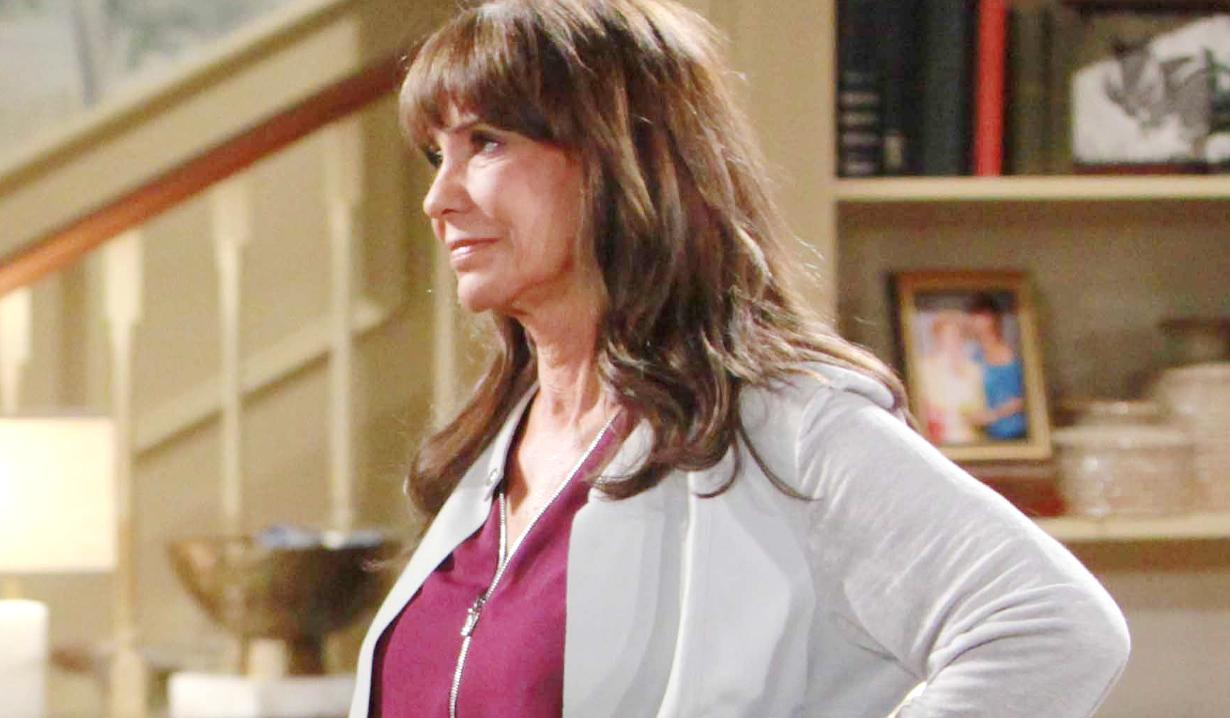 At Jabot, Phyllis warns Victoria when she hears what’s been going on, she’ll wish she’d stayed in Mexico. She dials her in on everything that’s gone on with Adam. Talk turns to Travis not returning. Victoria alludes to the special time they shared before exiting. Phyllis has a fantasy about marrying Billy and sharing their first dance, which ends abruptly when Jack cuts in. At Brash & Sassy, Billy and Cane find Jill and Colin canoodling on the sofa. Jill is amused at the looks on their faces. Insults fly and bickering ensues. Jill snarks that Billy should have given Victoria a reason not to go away. Billy tells Jill she doesn’t need him and he doesn’t need her. “I quit.” Cane mocks him into staying. Billy wants Colin to get Jill to quit micro-managing his love life. Billy will stay away from the mansion tonight. He exits. Cane accuses Jill of pitting them all against each other. Jill wants what’s best for the company and Billy’s love life.

At the Club, Hilary surprises Jack with a million dollar donation she acquired for the foundation. Across the room Neil and Devon discuss why Jack and Hil look so happy. Lily and the twins appear. The family tree comes up and Lily wants to find Neil’s parents. Neil reiterates he’s made peace with them not being in his life as Hilary appears. They exchange a look. Devon takes the twins upstairs as Jack takes Neil to discuss the donation. Lily demands to hear what Hilary knows about Neil’s parents. Hil divulges that he pushed them out of his life. At the bar, Neil and Jack discuss the decision to keep Hilary on the board. Neil reminds Jack that Phyllis dislikes her, and warns a good marriage is priceless. Jack thinks Phyllis will come to see Hil as an asset. Talk turns to Adam. Jack is heartbroken about his situation. Neil opines about family – trust is the glue that keeps them together. In Hilary’s suite, she shows Lily a letter from Neil’s mother that he never answered. There were also letters addressed to Lily, Devon, and the twins. Neil threw them out during their marriage, but Hil kept them in case he had a change of heart. Later, Neil joins Hilary, who says she gave Lily his mother’s letters and accuses him of keeping secrets and telling lies. “Why can’t you forgive your own mother?” Neil eventually confides that his mother was unhappy and unfaithful and either left or was thrown out. He never read her letters. Neil credits Malcolm’s mother with giving his father another chance at love. Hilary figures it’s why he saw her as unforgivable, just like his mother. At the pool bar, Lily fills Cane in that her father’s lied again. Cane leaves her with Devon, and Lily shows him the letters. Cane returns and gets more details. In the dining room, Phyllis assures Jack she’ll support her daughter’s wedding. Jack tells her about Hilary bringing in a million dollars. Phyllis advises he deposit it before it bounces. Jack decides they should slow dance, like it’s the first dance at their wedding. Phyllis flashes to her Billy fantasy and jolts away. Jack pulls her back and she admits she’d like to be a bride again. They kiss. Up at Hilary’s suite, Devon confronts Neil, who says the letters are better left in the past or they’ll cause more pain.

Related: Eileen Davidson and Vince Van Patten, a real-life couple who met on a soap set

Victoria arrives at home to find Billy there. He explains Colin and Jill are at his place, and she invites him to stay. Billy brings up Mexico. She admits Travis wanted her to stay with him and she was tempted. Billy says he would have watched the kids, and he and Cane could have run Brash & Sassy. He figures she’s afraid because she’s in love again. Victoria thinks he understands so much have met someone special like her. She confides you can’t check your feelings like you check your bags. Billy asks if she slept with him. She did, and it was really good, which made everything worse. Victoria goes to get him a pillow and blanket, but returns to find he’s left.

At the Chancellor mansion, Colin wants to know what Jill’s really up to. Jill tries to avoid answering, but Colin isn’t having it. He wants to know why she left Chicago and has entrenched herself in Genoa City. Jill asks him to trust her. Colin knows she’s holding something back. He figures she’s found something big and is exploiting it – he wants in on it.

Noah says to Phyllis, as Sharon looks on, “Put the dress down, okay, Summer’s not marrying that jerk.”

Summer, with Luca, says, “Oh my God, Daniel, you came!” Daniel replies, “I wouldn’t miss it for the world.”

As Adam is led through the prison in handcuffs and ankle chains, Chelsea’s voice says, “Please, show him some mercy because no one else has.”

Adam extracts a huge promise from...

Daniel stuns Summer, Luca gets a...