Adam extracts a huge promise from Nick, and Victor confesses to Nikki

Y&R Day Ahead Recap for Tuesday August 23, 2016: Adam is set on taking his punishment, Chelsea rants to Chloe, and Dylan is determined to track down Bethany. 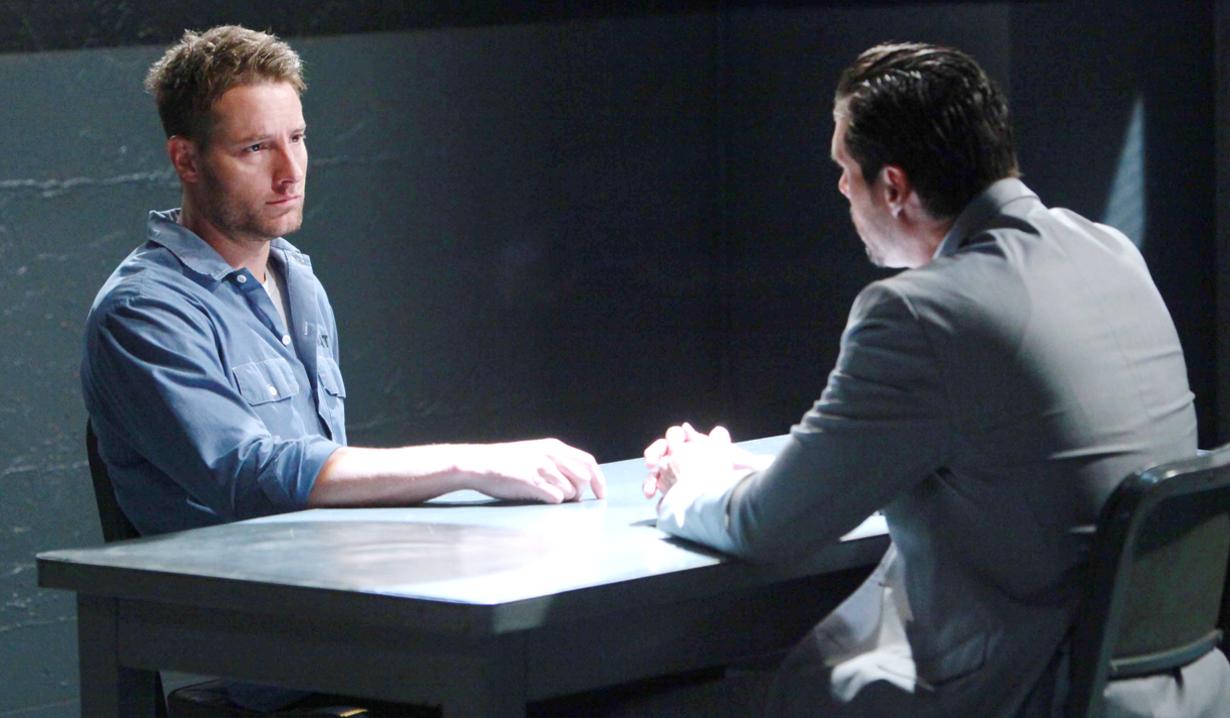 In the courtroom, Adam reiterates that he’s guilty and Chelsea protests. The judge asks her to sit, and Michael whispers to Adam to listen to his wife. Adam refuses to change his plea. Chelsea jumps up to appeal to the judge, who again tells her to sit down. Sentencing is scheduled for the next morning. Adam is led out. Everyone wonders about Adam’s choice. Chloe tells Kevin that Adam probably doesn’t believe he deserves his freedom. Outside the courtroom, Nick asks Victor is he’s happy now. Nikki intervenes. Nick reminds her Victor used her to sell Brash & Sassy out from under Victoria, and he is entirely to blame for Adam’s situation. Nikki insists he’s wrong. Victor wanders back into the courtroom where Michael is reassuring Chelsea. Victor blames Michael, which outrages Chelsea. Victor’s fed up with everyone pointing the finger at him and vows to do everything in his power to help his son. Victor places a call to Lesley, and then admits to Nikki he’s worried. They discuss Nick. Victor doesn’t care anymore what he thinks. He tells her Michael’s incompetent.

In his Walworth cell, Adam calls out, “Tell me when my visitors arrive.” Soon, Nick arrives and apologizes for doubting him. He wants Adam to fight back against Victor. Adam feels he must be held accountable for the guard. Nick asks how he can help. Adam looks across the table intently. “Be a father to my son.” They debate at length about Adam being in Connor’s life from behind bars. Adam isn’t up for that – Connor needs a man in his life. Nick wonders why not Jack. Adam wants it to be a Newman – someone who can handle Victor. He’d like Nick to teach Connor how to be independent and better than Adam. “It’s what we both would have wanted for Christian.” Nick wonders why he brought up Christian. Adam says he’s just talking father-to-father. He knows how much Nick suffered when Christian died. Nick’s parenting style reminds Adam of his mother, Hope. He pleads with Nick to be a father figure to Connor and gets choked up. Nick says he would be honored. Later, Michael arrives and Adam fires him.

Abby joins Stitch at the hospital and Dylan joins them. Stitch tells them the guard Adam attacked is in a coma on life support, and his condition is deteriorating. They wring their hands over Adam’s predicament – he shouldn’t have been in jail in the first place. They agree he wasn’t in his right mind when he attacked the guard. Abby gets a text that Adam pled guilty. They worry about this turning into a murder charge. Stitch goes. Dylan laments to Abby that if he’d found the diary pages earlier, Adam would be home. Abby realizes he blames Victor. Dylan leaves. Stitch rejoins Abby, and tells her he thinks Dylan’s probably right about Victor framing Adam.

Abby finds Victor and Nikki at Newman Enterprises. They rehash Adam’s circumstances. Victor assures her he’ll try to stop the downward spiral and thanks Abby for coming by. Nikki walks her out. Abby asks if Nikki believes Victor, that he didn’t frame Adam. Nikki insists Victor didn’t put Adam in jail and they have to stick together as Newmans. After, Nikki tells Victor that she defended him to Abby, just as she did to Nicholas. She wants to know, “Did you do it?” Victor muses, “We all make mistakes, don’t we?” Nikki breathes, “You framed your own son for murder.” She’s sure he’ll right this wrong. Victor hugs her and vows he’ll fix this.

At the penthouse, Chelsea rants to Chloe about whoever set Adam up – they’re as responsible for what happened to the guard as Adam is. Chloe thinks Adam wants to be punished. Chelsea asks, “You mean for Delia?” She frets over what to do…she has to stop this. No one tears her family apart and gets away with it. Nick arrives. Chelsea is upset to hear that Adam remains resigned to his fate. Chloe takes her upstairs, leaving Nick with Connor. Nick reassures the boy everything will be okay.

At the station, Dylan tells Kevin he’s determined to find Bethany Bryant. It might be the only chance to get Adam through this. Kevin warns if he brings down Victor it will destroy Nikki.

Hilary hollers, “You are the one keeping secrets and telling lies, so why Neil?”

Phyllis tells Victoria, “When you hear what’s been going on around here, you’re going to wish you’d stayed in Mexico.”

Billy says to Jill, who is holding onto Colin, “Mother you know best. You don’t need me, just like I don’t need you, so I quit!”

A disappointed Phyllis has a change...

Colin is suspicious of Jill’s...