Y&R Day Ahead Recap for Friday August 19, 2016: Nick confronts Victor about the diary pages, Chelsea awaits news on Adam, and Mariah is put in an awkward position. 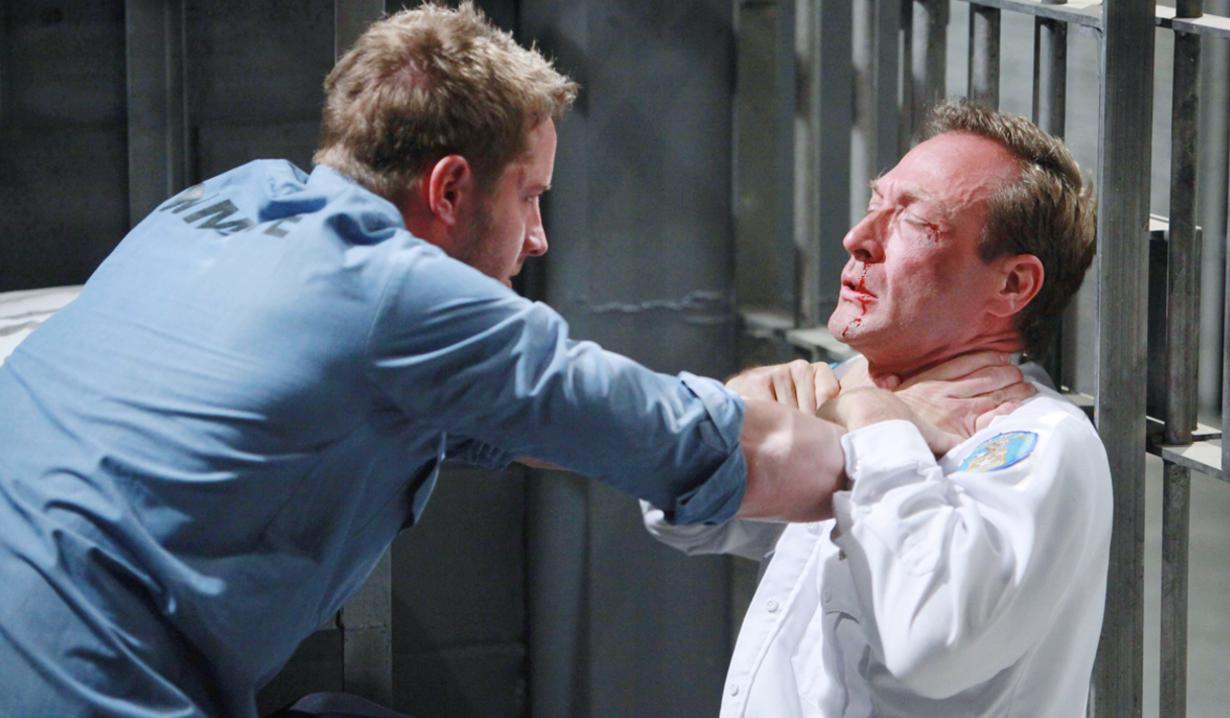 Nick arrives at the station asking if it’s true there is new evidence in Adam’s case. Paul confirms they found the missing pages from Sage’s journal. Nick peruses the pages and asks if Victor did this. Dylan confirms the woman who had the pages is connected to Victor, who claims she only hired her to seduce Billy. None of them believe it.

Chelsea panics as alarm bells sound at the prison. In his cell, Adam strangles the guard he thinks is Victor and gets tased by two other guards. The warden is trying to get Chelsea to leave when Michael arrives. He persuades Chelsea to go. The warden informs Michael that Adam’s been on a hunger strike and attacked a guard. After, Michael visits Adam in the infirmary. Adam remembers Victor trying to kill him. Michael sets him straight and tells Adam the police found the proof to exonerate him. The warden appears. Adam’s release won’t be so simple – he’s now facing assault charges. Adam flips out and Michael reins him in. Adam’s taken back to his cell where the warden says he’s looking at 6 – 10 more years.

At the penthouse, Victor and Chloe discuss the journal pages coming to light. Victor expects her to get out of town now. Chloe protests that she’s connected to Chelsea, but Victor reminds her Adam thinks she’s behind the journal pages. He strongly suggests she take her daughter and leave. Chelsea arrives. She’s taken aback to see Victor, but says something happened at the prison. Victor heads out. Chloe reassures Chelsea, who tells her she’s such a good friend. Chelsea phones Dylan to ask him to find out if Adam’s okay.

At Newman Enterprises, Nick confronts Victor about the diary pages and calls him a liar. Victor denies forging the pages. Nick asks why he was on the phone with Walworth. Victor says he was inquiring why Adam hasn’t been released yet and accuses Nick of wanting to keep Adam there. Nick doesn’t bite. They argue. Nick says Victor may not have forged the pages, but knows who did. He notes Bethany had no motive, unlike Victor, who went after all of them from prison. “What is wrong with you?” Victor insists he didn’t want Adam in prison.

Where Are They Now? Kelly Kruger in Girl’s Night Out

At Crimson Lights, Sharon asks Mariah about Kevin and hints that she told him why she took the flowers. Mariah is mortified. Kevin arrives as she panics. Sharon leaves them alone. Mariah apologizes for whatever Sharon said. Kevin asks, “So you don’t have feelings for me?” Squirming, Mariah says she feels a lot of things when she looks at him – like concern he’ll get hurt by Chloe. Just then she appears with Connor and Bella. Mariah takes the kids and Chloe tells Kevin she’s come to terms with Adam’s imminent release. After, Chloe, Mariah, and Sharon admire how good Kevin is with the kids. Chloe remarks that Bella deserves a happy family like Delia had.

As Travis tinkers on his boat, Victoria appears. He asks what brings her to Southern Mexico. She replies, “You.” They drink rum as she explains to him how Luca has set him up for the oil spill disaster and is trying to snake his way into the family. Travis warns if the plan was to seduce him into submission, she’s wasted a trip. Victoria assures him that wasn’t the agenda; she came because she could see how upset Phyllis was, also he doesn’t deserve what Luca’s doing to him. Travis listens patiently as she explains all he has to do is return long enough to expose Luca. Travis says he’s far away from all that bunk – he thinks it’s why she came, to see what she’s missing. Victoria wonders if the Blue-Eyed Beauty is just another place for him to hide. He thinks her ego’s bruised because she called and he didn’t come running. Travis questions her about the goings-on in Genoa City and reveals what Luca told him. Victoria denies she’s back with Billy and says Luca wanted to keep Travis away. Travis stops Victoria from leaving by telling her he dreams about her; he thinks about her all the time. They kiss. She admits she needed him as much as he needed her. They go down below, kissing passionately, to make love.

Michael says to Adam, “This is what you’re going to tell him – not guilty by reason of insanity.”

Billy asks Phyllis, “What does Victoria have to do with this?” She replies, “She went to Mexico to bring Travis back.”

In bed, Travis says to Victoria, “I’m going to ask you again. Victoria, come away with me.”

Adam snaps in prison, and Phyllis...

A disappointed Phyllis has a change...