Y&R Day Ahead Recap for Wednesday August 17, 2016: Chloe wants some assurances from Victor, Dylan gets back to work, and Phyllis puts some pressure on Victoria. 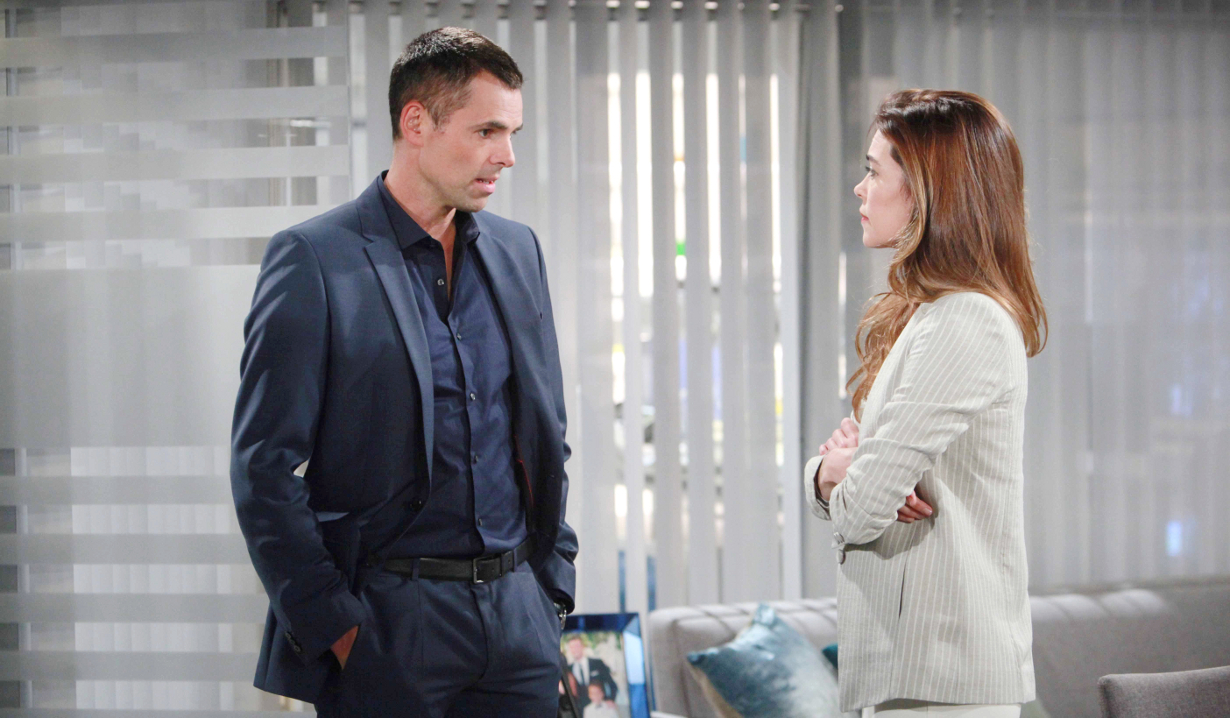 At the GCPD, Kevin is shocked to see the surveillance footage of Bethany getting the cash at the bus station. Paul is less impressed and reminds him that Adam already plead guilty. Kevin thinks this could prove Chloe is innocent. He says ignoring it would be negligent. Paul offers to send someone to gather evidence.

Chloe sits by the Delia memorial on the side of the road and cries about failing her. She says she did what she did to make Adam pay. Sobbing, she says she needs to find a way to live with what she’s done.

Flash from the past: It’s Jack vs Victor in 20 insane on-air soap opera feuds that still make us cringe

Bethany brings her bag of cash to Victor at the Newman office. She assumes he sent her the money. He plays dumb but suggests she not look a gift horse in the mouth. Before she can storm out, he says that her disappearance will get his son out of prison. She guesses he wants her to take a murder rap. He promises she won’t go to prison if she does what she’s told and orders her out of town. Victor doesn’t think she can afford to turn down the offer. She wants 3 million. The mustache smirks and agrees. Once they load her up, he tells her to buy a plane ticket and fly. When she leaves, he places a call, telling someone she’s on her way. Chloe shows up and asks if the woman she just passed is the new patsy. She paces and talks about how much Delia would have liked to be a big sister. She’s going to focus on Bella and wants his assurance that she can move on. He explains that she and Adam will be cleared.

Jack runs into Phyllis at the club. She claims to be swamped and needs to get back to work. He accuses her of lying and confronts her about working with Victor to stop Summer’s wedding. She won’t let her daughter rush into disaster. They bicker and she complains about having to endure his lectures. She hates being treated like a wayward child and stomps off.

Breaking: Eileen Davidson confirms she will be back with another season of The Real Housewives of Beverly Hills

Billy is at Brash & Sassy, asking Victoria why she didn’t leave him behind and sail off with Travis. She says they are bonded by their children. Victoria’s glad that they’ve had the chance to spend some time with them together. Phyllis watches them from the doorway for a minute before interrupting. She asks to speak to Victoria alone. Once Abbott exits, the women discuss the plan. Phyllis urges her to talk to Travis in person. Victoria has said goodbye to him and doesn’t need him back in her head. “This is not about you,” Phyllis says. She begs her to step up and Victoria agrees.

At home, Mariah discovers that Dylan has been sleeping on the couch. Sharon claims they just had a fight. They gloss over it. Sharon realizes she owes Dylan an apology. They hug. Mariah claps. Kevin shows up and tells them he has evidence to clear Chloe. He explains that Paul has sent someone out to collect more evidence. Sharon encourages Dylan to go. He jogs out. Mariah and Kevin debate Chloe’s innocence. He insists he didn’t fabricate the evidence. Then he notices the flowers he sent to Chloe are there. Mariah admits she took them before Chloe saw they were from him. They bicker about her involvement in is love life. She storms off. He’s confused. Sharon tells him to open his eyes.

Dylan shows up at the bus station and joins Paul in brushing for prints.

At the station, Paul gets a hit on Bethany in the database. He hands Dylan his badge and gun and they head off.

Back at the club, Billy bumps into his brother. Jack tells him about his fight with Phyllis. He explains the Summer situation and wonders when his wife became so comfortable lying to him. The topic turns to Victoria and her decision not to go to sea. Jack tells him that passion is fine, but stability lasts. That’s what he wants with Phyllis.

The cops search Bethany’s motel room and notice she left in a hurry. It’s a mess. Dylan finds the wigs left behind.

“I’ll keep it real short. Get the hell away from my wife,” Jack tells Victor.

“You are playing a dangerous game and you have so much to lose,” Ashley warns Phyllis.

Dylan discovers some more evidence in Bethany’s room. “You have got to be kidding,” says Paul.

Summer won't listen to her family...

Adam snaps in prison, and Phyllis...