Luca schemes to outplay Victor by lying to Travis about Victoria 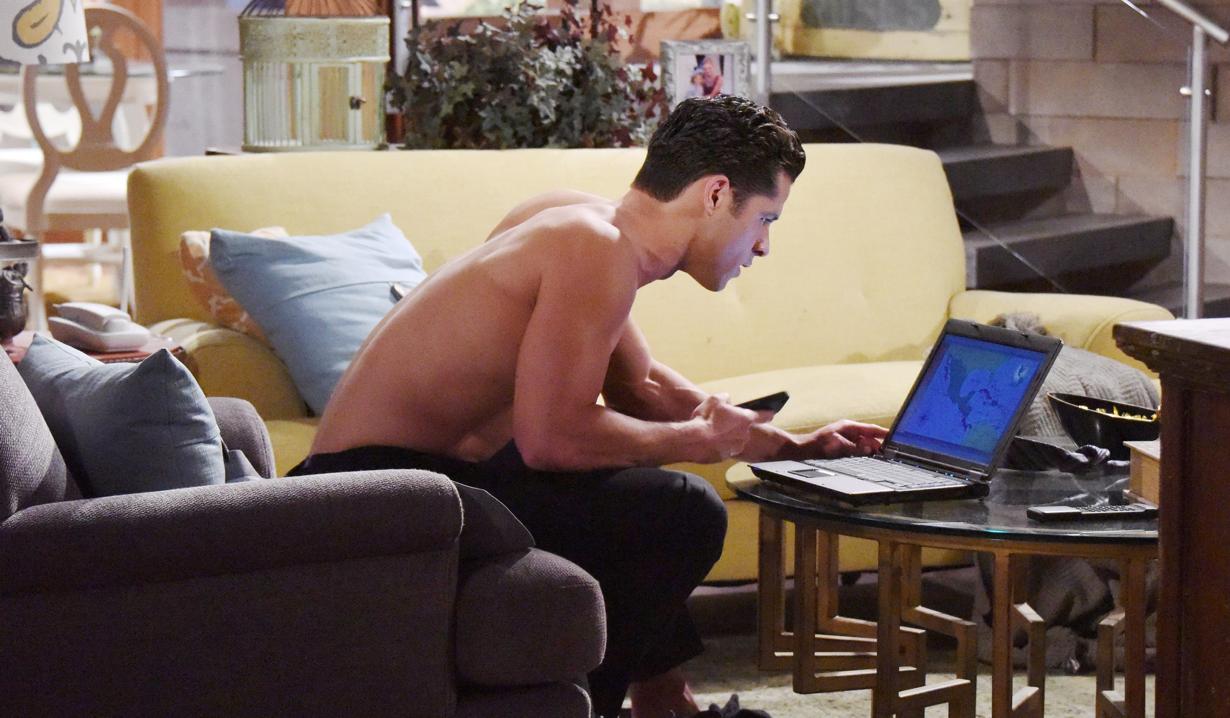 In Victor’s office, Chloe hesitates to give Victor the diary pages. She worries Victor’s plan to make someone else take the fall will backfire, but reluctantly hands them over. She doesn’t think Adam deserves to go free, but Victor insists he’s suffered immeasurably. Chloe accuses him of enjoying playing God. Victor thinks Chloe’s played God by raining down suffering on Chelsea, Adam and Connor. He advises her to take it from someone who knows – she’d better make changes if she wants her daughter to have a good and happy life.

In Walworth, Adam is depressed and dreams that Victor appears to him dressed as a guard who will always find a way to make him miserable. They argue about whether Adam controls his own fate. Victor says he’s had the key to his own happiness all along and just needs to learn to use it.

Announcement: Chrishell Stause back as Bethany

At the penthouse, Chelsea dreams that Adam is home. She then flashes through their past difficulties with Victor and wakes up crying. Chloe arrives, and insists Chelsea talk to her. Chelsea complains about Victor robbing them of their happiness. She opens up about Adam’s fear that her life and Connor’s life will halt while he’s in prison. Chelsea misses him, and doesn’t know how she’ll give her son a happy life. Chloe tears up; she hasn’t been honest. She admits there’s a small part of her that hasn’t let go of the anger – she didn’t realize she’s not the only one who’s hurting.

Nikki greets Victoria at Brash & Sassy and wonders if her daughter is having second thoughts about leaving Newman. Victoria insists all is well, but admits she wishes Victor had tried harder to get her to stay. They debate how Victor felt about her departure. Nikki knows Victor wants her to flourish; he always loves them. Nikki advises Vikki to live like her father – do what she wants and never regret it. In the Jabot office, Nick tells Phyllis he found something while investigating Luca, but not what he was looking for. Luca shifted the blame from himself to Travis fast – too fast. Nick questions Phyllis working with Victor. Phyllis shares that Jack believes she’s backed off. They agree there is no time to waste and set out to make their next move with Luca.

Luca and Summer make love at home. He can’t wait to make her his wife. After, Summer promises the sex will be even better on their wedding night. Luca suggests they have the ceremony and reception at the Top of the Tower. Summer is surprised how hard he pushes the idea and feels he’s testing her, or keeping something from her. Luca admits it is a test, but not for her – he wonders if her family truly supports their marriage. Summer thinks they’ll get used to the idea. Luca feels if Victor lets them use the tower it would be a sign of acceptance. They set the date for next Friday. Once alone, Luca contacts Travis, who attempts to hang up on him. He says Victor hired him to track him down and will pin the oil spill crisis on him. Travis only cares what Victoria thinks – she has his back. Luca doubts it…now that she’s back with Billy.

At Newman, Nick and Phyllis inform Victor that Luca’s been busily manufacturing evidence against Travis. Victor will get to the bottom of it. They’ll have Travis come back and refute Luca’s accusations – it’s the only way to prove to Summer that he’s a slimeball. Victor makes a call and Nick tells Phyllis he’s grateful she isn’t a mother to let Summer make this mistake. Victor has Travis’ phone number. Nick says only one person can convince Travis to return. Once alone, Phyllis and Victor agree about Luca and Summer. Victor says they can’t let it happen. Summer appears and wonders if they’re plotting to stop her wedding.

Nick arrives at Brash & Sassy as Nikki leaves. Nick tells Victoria she needs her help with regard to Summer’s marriage. “I need you to call Travis.” Victoria doesn’t think Travis will come back. Nick thinks she can convince him. She can’t do it.

Nick tells Victoria that he doesn’t want to drag Travis into this, but he’s their only hope.

Jill says to Billy, “You’re absolutely right about that, this is not your home.” Billy asks, “Are you throwing me out?”

Summer asks Luca, “Why didn’t you tell me that you had a meeting with my grandfather yesterday?”

Summer won't listen to her family...