Paul rips Dylan’s badge away, and Victor and Chloe are spied together 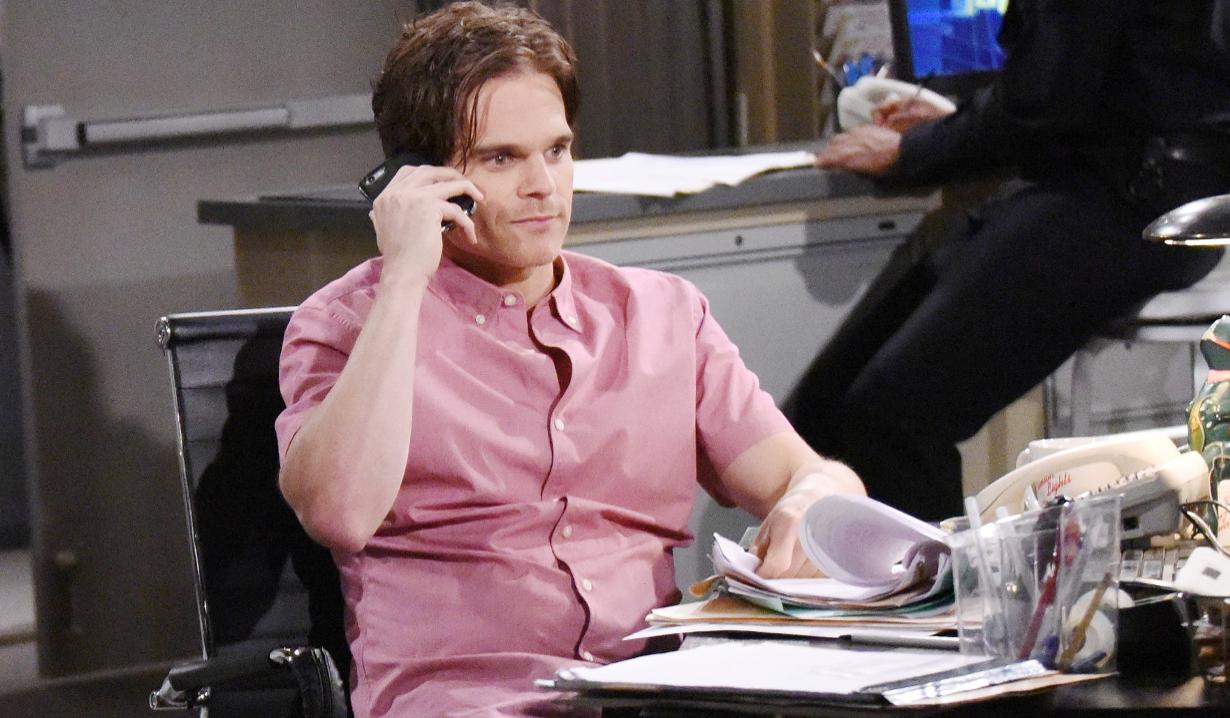 Chelsea and Chloe are celebrating Connor’s birthday when Nikki and Victor arrive. Chloe introduces them to Bella and Nikki agrees she looks like Delia. When Chloe takes the kids upstairs, Chelsea confronts Victor about daring to come into her home. Arguing ensues about Victor framing Adam as Chloe eavesdrops. Nikki insists Victor’s innocent. Victor reminds Chelsea he’s Adam’s only hope. Chloe joins them. Victor doesn’t think Chelsea knows who her real friends are, and will find out the hard way. After, Chloe hugs Chelsea, who doesn’t know what she’d do without her. Chloe pushes Chelsea to take Connor to see Adam even if he gets angry.

At the station, Kevin is studying the footage of Victor and the mystery woman when Michael arrives and urges Paul to keep investigating Adam’s case – he has the perfect resource to help exonerate Adam. “My brilliant brother.” Paul nixes reopening the case, but Michael continues to push – prison is killing Adam.

Where Are They Now? Lori Loughlin’s guest role on Blue Bloods

At Walworth, Adam writes a letter to Connor about missing his birthday. Dylan arrives. They discuss the hush-hush investigation and Chloe. Adam is relieved that Dylan agrees Chloe’s return is no coincidence. Dylan warns Adam he has to prove Chloe was Victor’s accomplice and he’s covered his tracks well. Adam crushes up the letter Dylan was going to take to Connor – there’s no point. Later, Michael arrives to find Adam extremely frustrated. Michael reminds him there are some fierce people fighting for him. Adam appreciates those who believe in him, but prison sucks the hope out of you. He wants help proving Chloe’s Victor’s co-conspirator. Michael would enlist Kevin’s help, but he still loves Chloe. Adam says Kevin needs to see who Chloe really is. “For my sake and his.” Once alone, Adam is surprised to see Chelsea and Connor. He wishes his son a happy birthday and holds him.

At the station, Kevin gets riled up when Dylan asks questions that indicate he still thinks Chloe is the mystery woman. Paul appears, bawls Dylan out for continuing to investigate, and suspends him. They adjourn to Paul’s office to argue. Dylan can’t understand why Paul can’t see Adam was set up. Paul hollers that they follow the rules, and makes him hand over his badge and firearm.

At Sharon’s place, she admires the flowers from Kevin. Mariah admits they were for Chloe and she stole them. She complains that Chloe doesn’t want to reunite with Kevin, but he’s determined. Sharon wonders if Mariah’s thinking of Kevin or herself. Mariah scoffs at the idea she wants Kevin for herself – she just wants him to be happy. Sharon wonders if she’s afraid Kevin and Chloe will reconcile and she’ll be left out in the cold. Mariah sometimes feels that’s where she’ll always be. Sharon worries Kevin’s using Mariah, who muses about hoping for something that’s not meant to be. Kevin calls – he’s concerned about Chloe, who didn’t acknowledge his flowers. Mariah urges him to let Chloe come to him and hangs up. Sharon advises her to take her own advice – men like to do the pursuing. Mariah supposes she could give Chloe the flowers and whatever happens, happens. Sharon thinks what Chloe doesn’t know won’t hurt her. They laugh.

Michael returns to the station and argues with Kevin about Chloe possibly being the mystery woman. He reminds Kevin what it’s like to be locked up for something you didn’t do. Kevin keeps defending Chloe. Michael warns him he and Dylan won’t give up.

In the Club dining room, Victor chews to Nikki about Chloe insinuating herself into Adam’s home. She wonders why he said he was Adam’s only hope. Victor gets a text and leaves. Paul appears and tells Nikki he suspended Dylan. Nikki assumes it has to do with proving Adam was set up and insists Victor’s innocent.

Victor meets Chloe in the park and warns she’s getting on his nerves. He wants her to hand over the diary pages and get the hell out of town. Nearby, Dylan spots them together.

Billy tells Jack, “You’re not letting Phyllis be Phyllis, you’re doing what you always do – you’re sucking the life out of her.”

Sharon says to Dylan, “You have no intention of dropping that case.” He replies, “I think I’ve found a way to clear Adam.”

Adam tells Chelsea to do him a favor and never put his son in that position again.

Victor lures Luca into his trap...