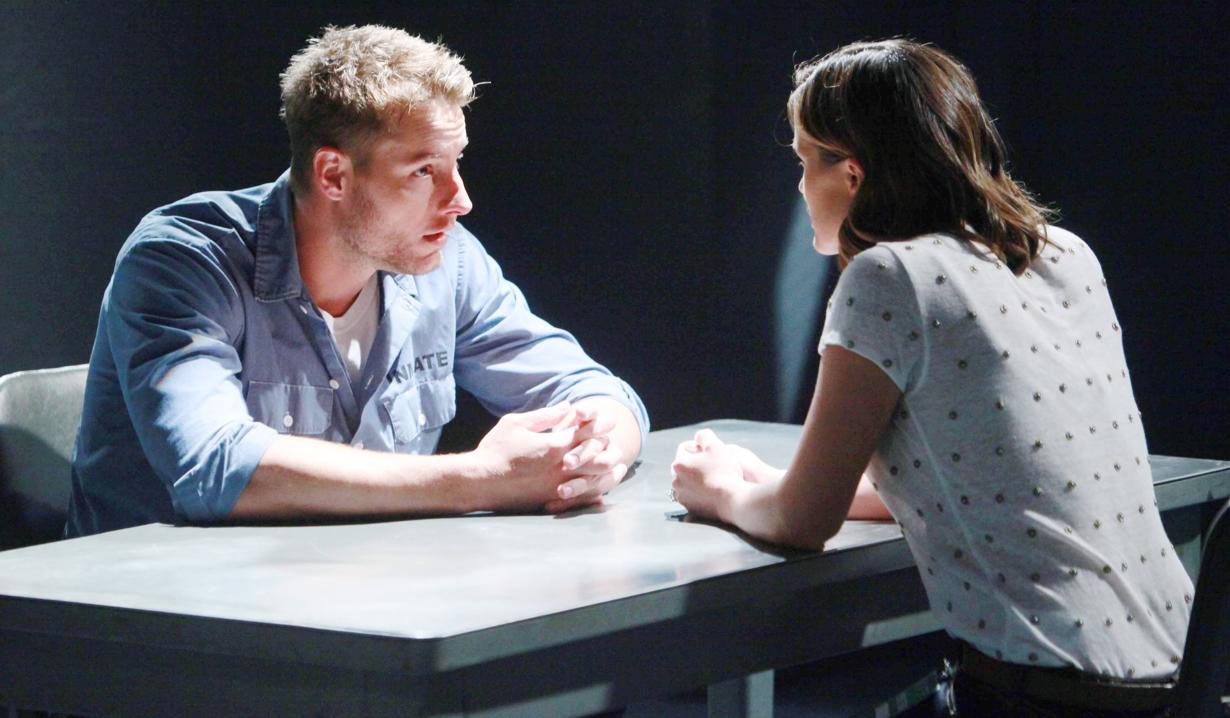 At Crimson Lights, Mariah is astounded to see Kevin’s been running. He says he ended things with Natalie. Kevin then adds that he wants to get back with Chloe and needs Mariah to help him. Mariah advises that you can’t go back. Kevin envisions a future with Chloe and Bella. He wants Mariah to lay the groundwork while she’s working with Chloe. Mariah pronounces it a horrible idea but agrees anyway.

At the penthouse, Chelsea thanks Chloe for going to see Adam. Chloe hopes he heard her. Chelsea leaves to visit Adam and Victor visits Chloe. He calls her out for living under Adam’s roof and wants to know where the diary pages are. She says she burned them. Victor doesn’t believe that. He warns her to think about her baby and her future – he wants those pages and he’s going to get them.

At the prison, Adam tells Chelsea he’s more convinced than ever that Chloe is working with Victor. Chelsea feels she was sincere. Adam says she was really sincere about pointing out how long he has to sit in there. He wants Chelsea to prove she set him up. They argue. Adam is stunned that Chelsea thinks Chloe is telling the truth. They go back and forth until Adam yells in frustration. Chelsea insists she’s not picking Chloe over him or giving up. Adam hopes Dylan can sniff out that the mystery woman is living with Chelsea. She wants to bring Connor, but Adam doesn’t want him there. He walks out.

At the design studio, Mariah chats to Chloe about Kevin. Chloe thinks the two of them should be together. Mariah says they’re just friends. She talks up how great Kevin and Chloe’s relationship was, but Chloe says it’s never going to happen. “I can’t. I won’t. It’s too painful.” Later, Chelsea arrives and tells Chloe that Adam is angry and is shutting down. She refuses to let him shut her out. Chloe says everything will work out the way it’s supposed to.

Summer and Luca canoodle in their apartment. He tempts her to take the day off and celebrate their engagement, but she has to tell her parents.

At Jabot, Jill wants Phyllis to step down from the foundation board now that Billy’s on it. They argue at length. Jill tells Phyllis to focus on her marriage, and confirms she feels Billy and Victoria are destined to be together. Phyllis advises she trust it will happen then, and leave her alone. Jill wants to send the ‘bump in the road’ back to their husband. Summer arrives and Jill notices her engagement ring right away. Once alone, Summer is glad Phyllis isn’t freaking out and makes a speech about Luca, including the suspicions about him. Summer says he chose her and doesn’t care about Newman anymore. Phyllis advises her not to rush down the aisle. Down at Brash & Sassy, Victoria wakes up cringing and apologizing. Billy has footage of her sleeping and tries to cajole her into working with him. Jill enters. Victoria’s upset that she got her drunk. Jill wants an answer about her offer. Victoria agrees to come back to Brash & Sassy. Jill hugs her. Once alone, Billy tells Jill no more matchmaking – Victoria coming on board is just business. He insists they’re not getting back together, but Jill states that love conquers all.

At Newman Enterprises, Victor isn’t thrilled to see Luca, who wants to bury the hatchet. Victor wonders why they’d do that. Luca tells him they both love Summer, and they’re engaged to be married. Victor listens to Luca go on about his love for Summer and warns him he no longer hires family members. He also tells Luca if he hurts Summer, he’ll answer to him. Later, Victoria arrives to tender her resignation. He says she’s one of the most capable executives he’s had. Victoria replies, “But I’m not Adam.” Victor says Jill is lucky to have her.

At home, Summer tells Luca her mother took the news well but advised her not to rush. Luca can’t wait to be her husband.

Victoria returns to Brash & Sassy, where she and Billy discuss Jill’s ulterior motive and how them getting back together will never happen. They get to work. Up at Jabot, Phyllis calls Nick to warn him about the engagement. Victor appears. He wants the same thing as Phyllis – Luca Santori gone.

At Crimson Lights, Kevin grills Mariah about Chloe. Mariah warns just because something worked before, it doesn’t mean it can work again.

In Walworth, Adam dreams that there was a break in his case and he goes home. He wakes up in his cell.

Cane asks Billy, “What happened to my idea, and why are you discussing any of this with Victoria?”

Victor says to Summer, “You’ve supported me always, and I will always support you.”

Phyllis tells Jack, “I would rather die. No way is that wedding happening.”

Jill gets Victoria drunk, and Lily...

Neil's family past stuns Lily, as...