Y&R Day Ahead Recap for Thursday August 4, 2016: Hilary may get booted off the board, Summer takes a pregnancy test, and Billy and Cane argue at Brash & Sassy. 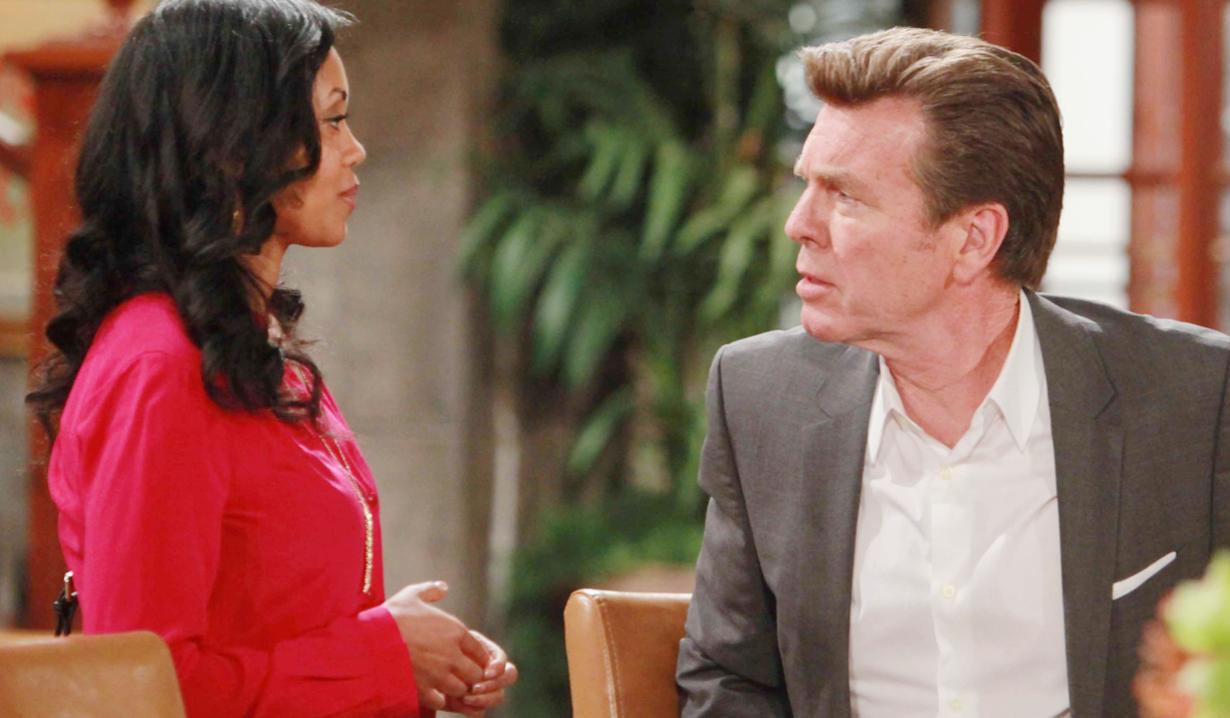 In the Brash & Sassy office, Billy is bored by Cane’s ideas. He mentions joining the Abbott-Winters Foundation board. Cane didn’t know Billy was into charity. They bicker. Cane asks what distracted Billy enough to drop the ball with Brash & Sassy as Jack pops in to tell Billy it means a lot he’s joining the board. Cane and Billy resume arguing. Billy blurts that he has a deal with Jill that leaves Cane in the dark. Cane reveals he also has a deal with Jill, and suggests they work together. Billy would rather see Cane fail. Once alone, Cane sets up a meeting with Jill. In the Jabot office, Nick asks Phyllis if she’s ready to be a grandmother again. Phyllis is upset Summer could be pregnant by that sleazeball Luca. They agree they need to get him away from her. Phyllis will talk to Summer.

Spotlight on… Phyllis and Sheila’s final encounter on Y&R

At home, Summer tells Luca she’s a whole week late. She thinks he wants to run, but Luca assures her he will stick by her, as she did him. They go to buy a pregnancy test. After, Summer takes the test as Luca waits, and flashes through their relationship. Summer comes downstairs, test in hand, and they look at each other. Later, Phyllis arrives. Summer’s alone and Phyllis says Nick overheard her tell Luca she might be pregnant. She goes on and on about it until Summer says. “I’m not pregnant.” Summer doesn’t want Phyllis telling her how to live her life.

At Crimson Lights, Nick finds Luca sitting alone and grabs him. He informs him he will step up and do right by his daughter. Luca insists he’d never abandon Summer, he cares about her too much. Nick lays out his expectations if Summer’s pregnant. Luca vows to take his advice to heart. After, Nick flashes to talking with Summer about Luca and Newman Enterprises. Phyllis arrives and informs him Summer’s not pregnant. They feel they dodged a bullet. Nick is certain Luca was behind the oil disasters and vows he’s going down. He arranges to fly to Newfoundland.

Luca returns home with flowers and chocolates. He had an epiphany. Luca kneels and produces a ring box. She says the test was negative – he doesn’t have to do this. Luca already started picturing their lives together; he wants to get married and start a family. Luca opens the ring box and proposes romantically in Spanish. Summer says yes. They kiss and begin to make love on the sofa.

In Lily’s office, Neil thanks her for letting the foundation use the space for their board meeting. Lily’s phone buzzes and she frowns. Neil asks, “What is it?” She says it doesn’t look good. She fills him in on the drug trial lawsuit hitting the news. She’s upset that Devon is getting dragged down with his gold-digging bitch wife. Neil says it all comes back to him going to the islands. Lily won’t let Hilary off the hook. Downstairs, Devon and Hilary are cornered by press wanting to know why they haven’t offered a settlement to the drug trial victims. Hil jumps in to say they’re blameless and argues with the reporter. Ashley enters as Hilary names Dr. Simon Neville as the rogue employee, and intervenes to defend him. The press is dismissed and arguing ensues as Ashley reminds Hilary she was the one who bribed the lab tech. Devon referees. Ash tells him the woman he loves is out of control and stalks off. Devon snaps at Hil that he’s calling a lawyer to ensure she didn’t make things worse with her spontaneous press conference. He returns and says he wishes she didn’t make it so difficult to have her back. Upstairs, Jack arrives in Lily’s office in an uproar about the drug trial lawsuit affecting donations to the foundation. Ash enters. Jack’s relieved she’s not named in the lawsuit. Lily suggests giving Hilary her walking papers. Ash agrees and recounts Hilary’s clash with the press just now. Billy arrives, followed by Hilary and Devon. Billy wants to wait for Phyllis, but Hilary is keen to get through the agenda. Ashley informs her they have new business to discuss. Phyllis enters as Jack calls the meeting to order, and asks Billy what the hell he’s doing there.

Lily says, “I am making a motion that we vote to remove Hilary Hamilton from the board of this foundation, effective immediately.”

Jill gets Victoria drunk, and Lily...