Chloe sheds tears while visiting Adam, and Summer might be pregnant

Y&R Day Ahead Recap for Wednesday August 3, 2016: Sharon and Mariah cope with camping, Kevin reacts to the DNA test results, and Victor has someone investigated. 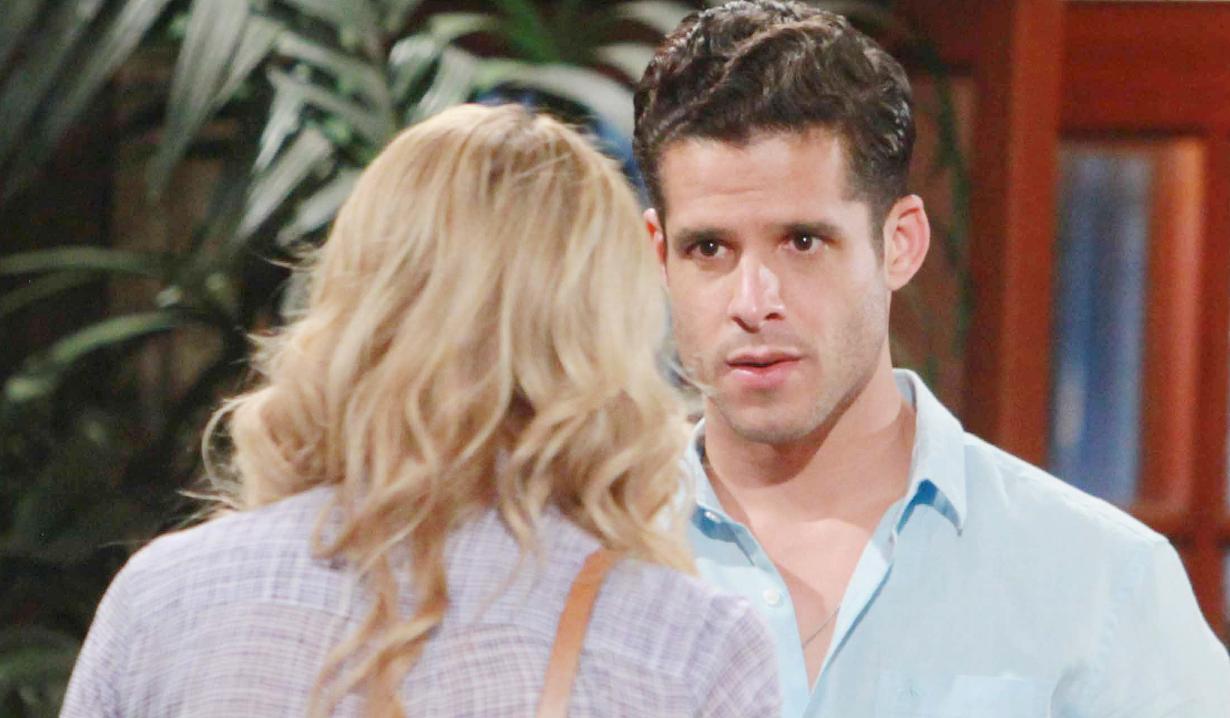 On the camping trip, Mariah screams about something in the lake and Sharon thinks she has poison ivy. When Mariah gripes about no cell service, Dylan suggests they all go fishing. Sharon and Mariah stay with Sully and discuss not being ‘outdoorsy’ and possibly having to gut fish. They secretly snack on goat cheese and crackers. Dylan and Faith return with fish expecting Sharon and Mariah to clean them. They beg off and Dylan deflates; they don’t like camping, but he does because of his dad. Sharon says she and Mariah will clean the fish. Later, Faith wants to tell a campfire story – the Tale of the Baby-Switching Ghost! Faith clarifies it’s about Sheila Carter.

In Summer’s apartment, Luca suggests she change her mind and go back to Newman Enterprises. Summer wonders why she’d do that. Luca knows how much it means to her.

At the penthouse, Chelsea wonders if she told Nick there was a plan to get Adam out of jail, would he help or get in the way? Nick just wants the truth. Chelsea says Victor did this and could undo it, but won’t. She encourages Nick to find out where Victor’s hiding the real journal pages.

At Newman Enterprises, Victor has hired a man to find out who is responsible for the oil spill. He wants him to focus on Luca and retrace every move he made while Victor was in prison. Nick arrives and asks Victor if he’s the reason Adam’s in prison. Summer arrives and tells Victor she’ll return to Newman. Nick wonders why she changed her mind. Summer admits Luca encouraged her, and warns Nick not to think the worst of him. Victor sends Summer to her office, then tells Nick it’s his fault she’s susceptible to that punk Santori. Victor feels Nick left the company and his daughter vulnerable. Nick complains that Summer’s into the guy, he won’t make him more appealing by forbidding her to see him. He advises Victor stay out of it and exits. In Summer’s office, Luca arrives and gets a chilly reception. Summer admits she’s late. Nick arrives outside the door in time to hear Luca ask, “You’re pregnant?”

At Walworth, Adam tells Michael he’s feeling like he’s ready to get out of there. Michael reminds him the case is closed. Adam grouses about Paul not doing his job. After, Chelsea arrives and tells Adam she’s not sure Chloe is Victor’s accomplice. Adam is certain it’s her, and Chelsea is only seeing what Chloe wants her to see. Chelsea admits Chloe moved in and it’s like old times. Adam says Chloe is playing her – he wants Chelsea to get Chloe to visit him.

In the hospital, Kevin learns he is not Bella’s father. Chloe reiterates she’d never keep him from his kid. Kevin offers to be a father figure for the girl, and is surprised to hear Chloe’s staying at Adam’s penthouse. Chloe reminds him Adam’s in prison. Kevin thinks they should stay with him. Chloe won’t play house, and suggests he knock up his girlfriend.

Back at the penthouse, Chloe updates Chelsea on the DNA results. Chelsea says she went to see Adam, and suggests Chloe visit to tell him he’s forgiven. Later, Chelsea finds grief recovery books in Chloe’s bag and muses, “You’re really not out for revenge.”

In Crimson Lights, Kevin fills Michael in on Chloe having a child, and him not being the father. Kevin can’t think about Natalie right now; he’s still stuck on Chloe. Michael says she just walked in, and tells him not to be an idiot. Natalie joins them and Michael leaves. She’s relieved to hear Kevin’s not a father. Kevin breaks up with her. Natalie rushes out.

Chloe visits Adam at Walworth. She observes it must be weird to know he’s there and she’s at hanging out with Chelsea and Connor. Chloe shakes her head over Victor setting him up – the man is twisted. “I’m sorry for what you’re going through.” Adam snaps at her to give him a break and cut it out. Chloe goes on about Bella and Connor and tells him she forgives him. Adam thinks she’ll always hate him because of Delia. Chloe can’t focus on her death anymore. She tears up. Adam counters if someone tried to keep him from Connor, he’d never forgive them. Chloe’s glad she came. Adam says it’s been enlightening. Outside, Chloe wipes her tears and smirks.

At the campsite, Dylan takes a call from Chelsea, who pleads that they need him on the case, despite Paul’s lack of interest.

Neil watches Lily stare at her phone. “Lily, what is it?” Lily says, “This does not look good.”

Nick asks Phyllis, “Are you ready to be a grandmother again?”

Luca looks at Summer, who is holding a pregnancy test.

Kevin's DNA results are in and...