Y&R Day Ahead Recap: Phyllis moves out, and Travis says goodbye to Victoria

Summary for Wednesday July 13, 2016: Adam tells Victor his decision, Dylan gets a tip, and Jack confides in Nikki. 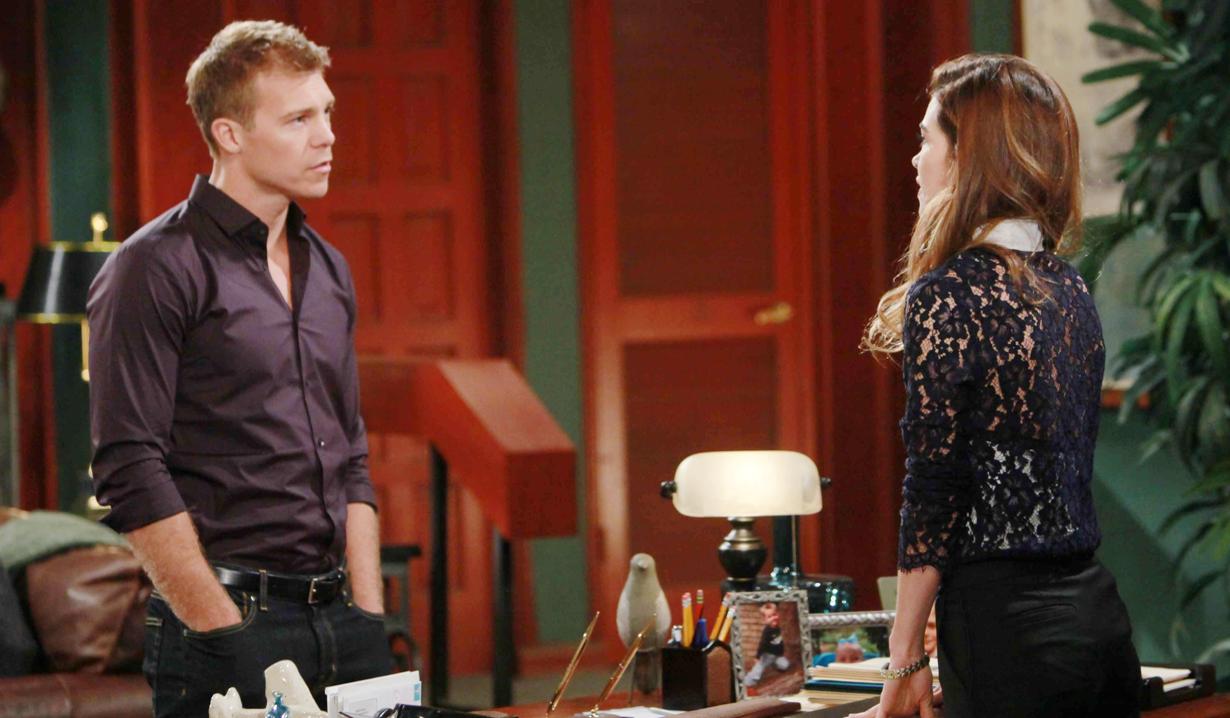 Victoria and Travis discuss going away together at Hank’s Bar. He wants her to see the world in a new light like he did, and suggests they hit the open sea for three months and bring the kids along. Victoria needs time to process the idea.

Billy calls Hannah to bring the kids over to the mansion. Cane overhears. Billy says Jill can malign him all she likes but he’s a good dad. The kids arrive and Cane shows them the paint cans as Billy flashes to telling Phyllis he’s out.

In Jack’s office at Jabot, Phyllis tells him she’s not the person he believes her to be. Puzzled, Jack tries to reassure her. Phyllis admits she’s felt stressed for months. Jack thinks it’s about Victor and worries he hasn’t been there for her – she deserves better. Phyllis counters that he deserves better. She cries that she’s lost herself and Jack realizes she may want a break from their marriage. Phyllis will get a suite at the Club. “I’m so sorry, Jack.” Jack feels she’s done nothing to be sorry for.

Chelsea greets Adam at the penthouse – there is still no good news about his case. She wonders if he’ll take Victor’s deal and go to work at Newman. Dylan arrives and complains that he looked at the Walworth visitor log, which coincides with the hacked footage dates. He is complicit now. Dylan exits, vowing to get the truth. Chelsea and Adam feel bad about lying to him. Adam says he’s ending this by taking Victor’s deal. Chelsea thanks him for doing this for their family. They kiss.

Nikki and Victor discuss his appeal in his hospital room. She says Abby’s on board, though it went as expected with Phyllis. Victor wonders about Adam. Nikki feels he’s the key. She’s surprised Victor thinks Adam will be on board. Victor muses that he knows what’s at stake. Adam arrives outside and Nikki mentions Victor’s appeal. He reminds her he’s on trial for murder, and then enters Victor’s room and tells him, “You win.” They hash out their deal. Adam will return to Newman with 100% commitment and Victor ‘hopes’ the diary pages will surface just before Adam’s trial resumes. Adam rants about being Victor’s puppet and his lack of unconditional love. He’s angrily leaving as Victoria arrives. She asks if he’ll help with the appeal. Adam says, “Why not?” Victoria joins Victor and they dance around who can count on whom. Victor reassures her, but also confirms he’ll be taking back the CEO position at Newman. Victoria is glad they talked, kisses him, and leaves, looking thoughtful. Later, a woman appears in Victor’s room dressed in scrubs. He asks, “What the hell are you doing here?”

Nikki and Dylan chat about her reconciliation with Victor at the Club. Dylan understands she loves him and urges her to be happy. Dylan gets a call and has to go. On his way out he tells Chelsea he received a tip in Adam’s case. Later, Phyllis leaves Jack at the foot of the stairs and goes up to her suite. Jack runs into Nikki and confides that Phyllis moved out. He partly blames Victor and will never forgive him. Upstairs, Phyllis cries and throws her phone.

Victoria meets Billy and the kids at Crimson Lights. Billy loves them and worries about missing out on important moments in their lives.

Travis has planned the trip and found a buyer for the bar when Victoria rejoins him at Hank’s. She wants to take the kids and leave with Travis, but can’t do it to Billy. Travis kisses her. He tells her that was goodbye. Travis loves her, but can’t stay while this place eats her alive. Someday he might return. “Until then, save a dance for me.”

Adam reports back to Chelsea at home. He fumes that Victor didn’t commit to anything. Chelsea tells him about Dylan getting a tip – this could be it.

Billy and the kids return to the mansion. He tells Cane they’re ready to start painting. Victoria arrives, admires the yellow paint, and joins in.

In an undisclosed location, Dylan dons gloves, opens a locker, and removes a manila envelope.

Sharon asks Dylan, “What did Kevin say to you? Please Dylan, just forget about what he said!”

Natalie peers at her laptop and says, “Who’s your little buddy, Victor? Boom.”

Chelsea asks Adam, “How long until you’re cleared?” He replies, “Victor screwed me over again.”

Y&R Day Ahead Recap: Phyllis has a...