Summary for Friday July 1, 2016: Mariah realizes Sharon is seeing Sage, Ian takes the stand at Adam’s trial, and the courtroom is stunned by Victor’s testimony. 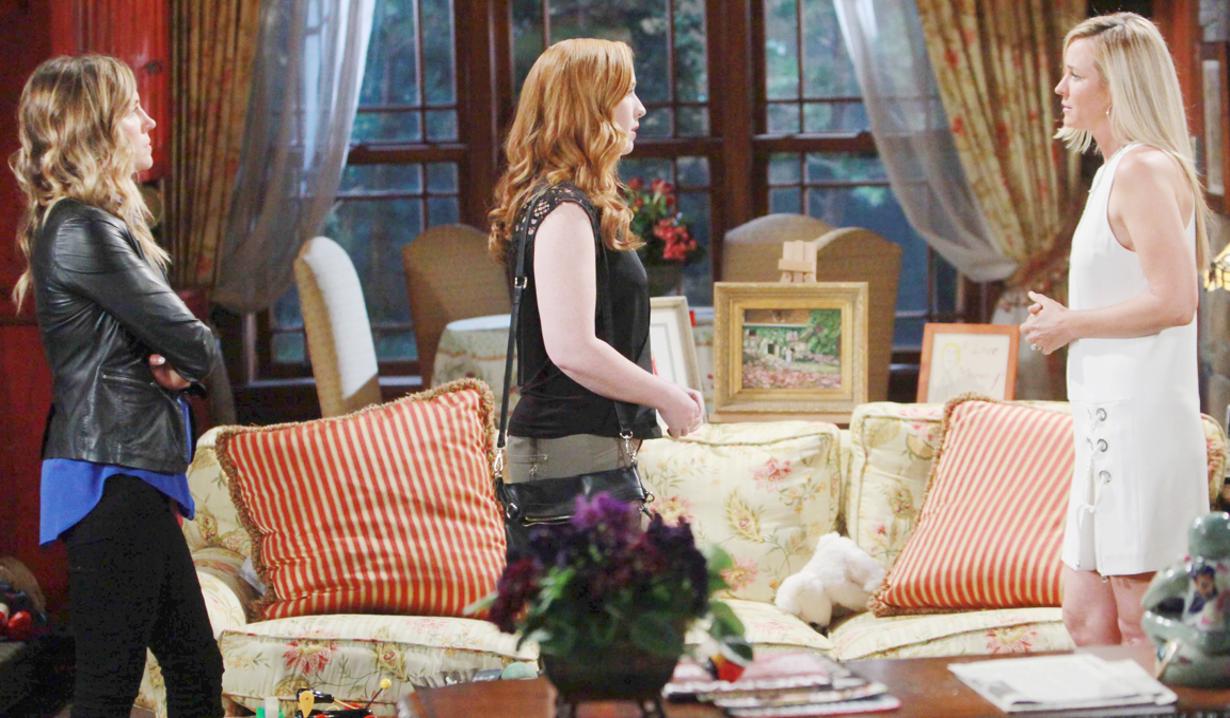 At the penthouse, Adam is uptight about the trial. Michael arrives with Kevin, who hasn’t been able to identify the woman in the footage with Victor. Michael suggests a postponement, but Adam wants to get it over with. Kevin will stay on it. Debate ensues about what could happen in court. Adam still wants to proceed. Michael and Kevin step out. Adam assures Chelsea he’ll be exonerated.

At Sharon’s place, she and Dylan rehash Adam’s case. He leaves for the trial. Mariah appears with Sharon’s pill bottle. She accuses her of going off her meds and wonders who Faith heard her yelling at. Sharon admits she went off her meds to stop the nightmares and it worked. Sage appears to her. “You’re such a liar.” Mariah keeps on about the meds and Sage continues to needle Sharon. Mariah realizes Sharon’s seeing Sage and hollering back at her. Mariah frets over how far this has gone. “You have to do something now!” As Mariah goes on about Dylan needing to protect the kids, Sage steps in front of her and taunts Sharon about doing anything to hold onto a man. Sharon screams, “Shut up!” She grabs a bookend and knocks Mariah out.

Nick, at Newman Enterprises, wants Victoria to join him at Adam’s trial to present a united front.

In the prison infirmary, Victor tells Meredith he doesn’t want her at the trial. She wonders if his family’s been right all along. They argue. Ian appears and chortles to Victor that they both want the same thing – justice. “See you in court!”

Throwback Thursday! Fourth of July drama at the Newman Ranch

At the courthouse, Summer tells Jack she’s hoping to see Grandpa. Jack thinks Victor framed Adam. Nick and Victoria arrive, and go in with Summer. Adam and Michael join Jack, who thinks it’s clear Adam was set up. Inside, Paul arrives with Christine and is surprised to see Nikki. She’s there to see if Victor will lie and destroy his son. Dylan arrives and more discussion ensues about whether Victor framed Adam. Nikki thinks Victor did it. Chris snarks about Nikki enabling him for years. Outside the door, Jack spars with Victor as he’s brought in. Victor maintains he’s fighting for justice. Jack goes in and Chelsea, with Connor, confronts Victor about ruining their lives. Michael and Kevin appear after. Kevin takes Connor. Soon, the trial begins with Chris and Michael’s opening statements. Dylan testifies about the evidence, Nick testifies about Sage’s journal and how it could have been forged by his father, who is out for revenge. Michael calls Ian to the stand. Nikki makes a sour face. Ian insists he wants to see justice done and testifies that Victor bragged about framing Adam in prison. Summer shakes her head and storms out. Chris calls Victor as a rebuttal witness. Meredith sneaks in the back. Victor stuns everyone by testifying that he loves Adam with all his heart. He says Ian is a pathological liar and denies telling Meredith Gates that he had evidence of Adam’s guilt. He thinks Gates has developed feelings for him and wanted to help. Nikki exits. Victor denies setting up Adam – he believes he was set up by Ian. “My son Adam is not a murderer.” Outside the doors, Ian realizes Adam’s escape plan was phony and tussles with a bailiff for his gun, which he then aims at Nikki. Victor exits the courtroom and Ian shoots him and takes off with Nikki as a hostage. Dylan, Michael, Nick and Victoria are first on the scene. 911 is called. “Victor Newman’s been shot!”

Sharon is kneeling over Mariah with Sage asking how many more people she’s going to hurt when Kevin enters the house and asks what happened.

Sharon gabbers at Mariah’s unconscious form as Kevin listens, “I didn’t mean to hurt you, you know that right? It was her, I had to get rid of her!” Kevin asks, “Who’s her?”

Nick, kneeling by Victor, says, “We’re having trouble staunching the blood.” Jack removes his jacket. “Use this.” Paul exclaims into his phone, “Where the hell is that ambulance?”