Summary for Friday June 17, 2016: Phyllis and Billy begin their weekend rendezvous, Nick has a change of heart, and Mariah prepares to tell Kevin everything. 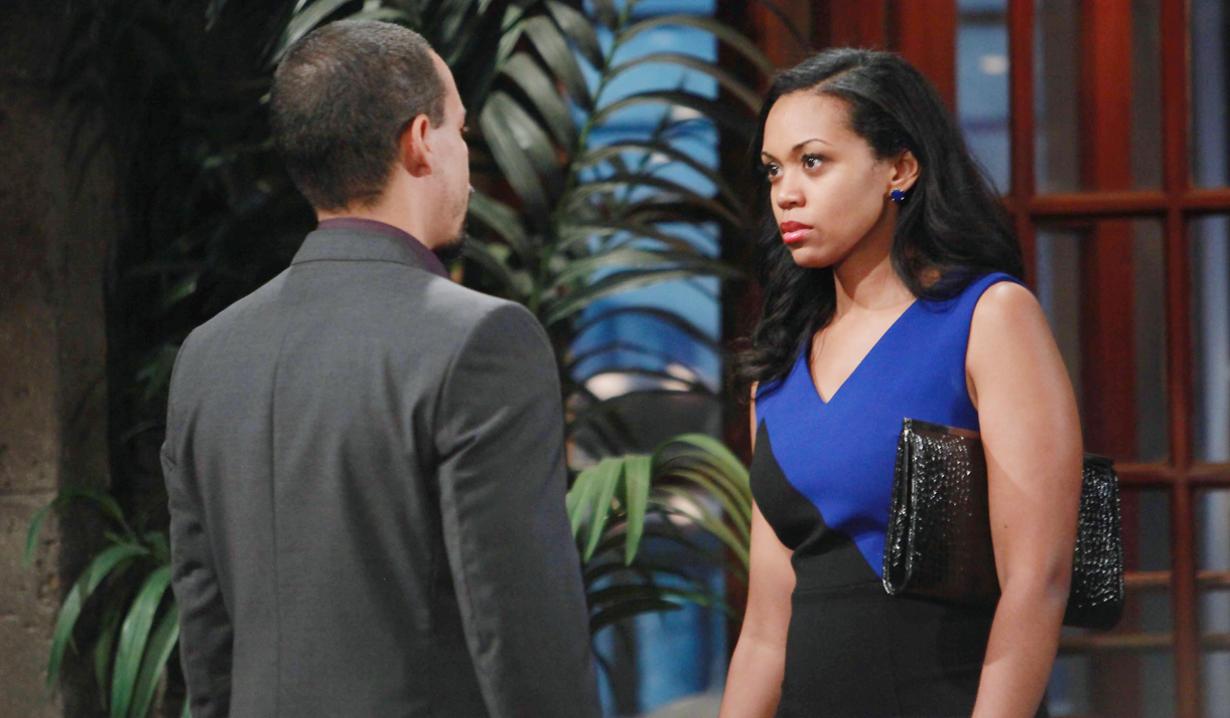 At the Club, Phyllis is thinking about Billy when Jack asks about her Pass Key conference. He goes on about how lucky he is to have her and how he misses her already. She snaps, “It’s only Canada, Jack.” Nearby, Devon arrives and Lily and Cane fill him in on Hilary’s fainting to get Jack’s attention. Devon protests that his wife has flaws, but they’ve gotten past the distrust. He thinks they should blame Neil for what she’s going through. Lily says he’s not responsible for Hilary’s behavior and besides; it’s no excuse for her blackmailing people. “Open your eyes!”

At Billy’s place, he changes his weekend plans with Johnny through Hannah and then flashes to his last encounter with Phyllis. She calls and worries if what they’re about to do is worth risking everything. It turns out she’s already outside his door. They have a picnic in the living room and chat about Brash & Sassy. Billy mentions the people there love Victoria and miss her. “What’s not to love, you know?” Phyllis looks away. Talk turns to Victoria and Jack firing him. Phyllis says they did it because they love him. They kiss, but Phyllis feels awkward and tries to back out of the whole thing. Billy knows there are a million reasons for her to walk out, but he wants this weekend to laugh and get to know her; to know what it feels like to wake up next to her. They kiss passionately.

At the pool bar, Hilary wants Neville to tell her he’s fixed the protocol. He hasn’t yet. Ashley never wanted to see her relapse. Hilary hisses at Neville, “Just fix it.” She keeps lashing out and Ashley can’t believe she’s behaving this way to the man who holds her life in his hands. Hilary doesn’t back down. Neville reminds her she paid off the lab tech and Ashley took the fall – he’s had enough of her self-destructive narcissism. Ash warns her to stay away from the lab…and her brother. After, Neville tells Ashley he wants to live up to her faith in him. He sets out for the lab.

At Sharon’s place, she and Mariah rehash the secret keeping. Mariah thinks Sharon’s guilt is like a tattoo on her forehead and is forcing her out the door for a change of scenery when Kevin appears and realizes something is wrong. Mariah sends Sharon on her way and then needles Kevin about Natalie. Kevin wants to know why Mariah and Sharon are on edge. He won’t leave until she comes clean. “You haven’t been the same since you moved in with Sharon.” Mariah blames him for becoming a jackass. Kevin isn’t buying it and tells her she can trust him with anything.

In their suite, Devon questions Hilary about collapsing. She lies that she merely forgot to eat. Devon worries there’s more to it. Jack arrives and Hilary repeats her story. Jack covers for her. Devon listens as Jack and Hilary work. When she gets a hand tremor holding her pen, Devon notices Jack place his hand over hers. Once alone, Devon confronts Hilary about her relationship with Jack, which felt like more than business. Hilary complains about Lily being out to get her. “Don’t let Lily do this to us.” She seduces him. Downstairs, Lily and Cane discuss trying to convince Devon of the truth about Hilary. Lily says they have to find a way to get him to see her for who she really is.

At Crimson Lights, Nick and Dylan discuss Sharon’s nightmares about Sage. Dylan confides that she feels guilty about moving on, and tells him Mariah is filling Sage’s position at work. Nick guesses that’s why she’s so uncomfortable around him. Sharon arrives and is stunned to hear Dylan told Nick about her Sage nightmares. Nick says he was worried she was off her medication. Sharon is further upset that Dylan told Nick about Mariah filling Sage’s position. Nick tells her she’s not doing anything wrong by moving on with life. Later, Esther talks to Nick about losing Mrs. C and Delia, and Chloe being gone, and advises him that life goes on; he needs to go on. Nick thanks her and phones Dylan – he’s changed his mind and will give permission for Constance’s body to be exhumed again.

Y&R Rumor! Could Chloe be returning to Genoa City with her daughter?

At the pool bar, Ash warns Jack that Hilary is manipulating him. She then tells him she wants to come back to work at Jabot. Jack wants to know about her paying off a lab tech. Ash says the drug saved her life. Jack feels it isn’t like her and wonders if something’s going on he doesn’t know about.

Sharon and Dylan arrive at home just as Mariah tells Kevin he’s right about her hiding something. “I’ll tell you everything.”

Devon, with Neil, says to Neville, “Press now means more sales for us later.” Neville replies, “Not the kind of press that says our patients are dying.”

Jack says to Hilary, “You know who abducted you, don’t you? Tell me, who is it?”

Billy and Phyllis are half-dressed and kissing on the sofa when Ashley comes to the door and calls out, “Billy let me in. I know you’re home!”