Y&R Day Ahead Recap: Nick knows something is off with Sharon and questions Mariah 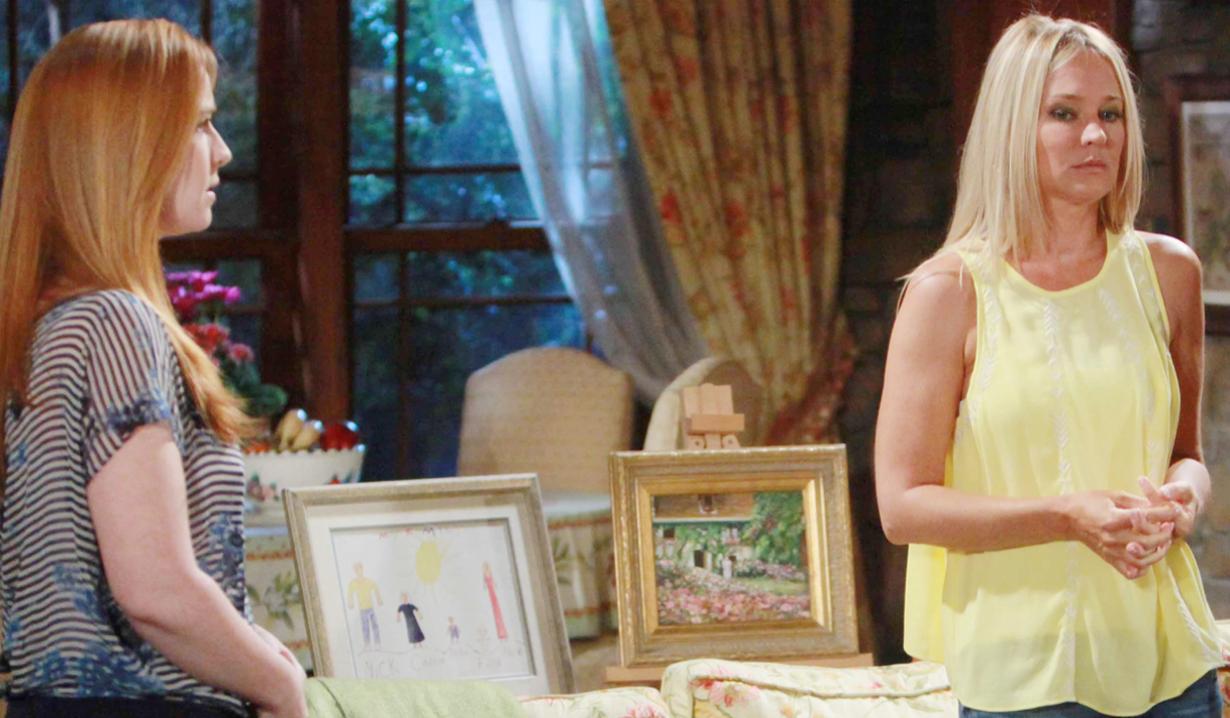 At Newman Enterprises, Luca shows Nick the information he found on Travis. Summer enters and is pleased to see them with their heads together. Nick concedes that Luca can be useful. Summer wants to know what’s going on. Nick thanks Luca for the research and leaves. Luca tells Summer he missed her. She wants to know what they were hiding. Luca wants to keep the confidence to prove his loyalty. Summer agrees to drop it…for now.

At home, Sharon has a nightmare that Mariah enters hollering about an accident and Sage appears with blood all over her face saying, “You were supposed to help me.” The nightmare continues with Sage telling Sharon she only cares about herself and accusing her of torturing Nicholas. She will haunt her until she makes this right. Sharon snaps awake. Dylan is there. She tells him she dreamed she couldn’t save Sage. Dylan wants to know what else is going on. Sharon claims she’s down about Adam’s murder case. Dylan vows to get to the truth. Later, Mariah arrives and Sharon tells her about the nightmare. Mariah urges her to deal with the guilt. Nick arrives. He and Mariah commiserate about Luca being a tool. Nick says he and Phyllis plan to kill him with kindness. Sharon watches Nick interacting with the baby and flashes to Sage holding him and wondering how she didn’t know he was hers. Mariah takes the baby upstairs and Nick expresses concern about Sharon, who seems tired. He assures her she can tell him anything. Mariah reappears – Sully wants Sharon. After, Nick wonders about Sharon to Mariah, who says she has somewhere to be. Nick goes, and Mariah tells Sharon she needs to pull it together or the truth is going to come out on its own.

Where Are They Now? Cameron Mathison and Susan Lucci reunite

At Travis’ place, he and Victoria have just had some great sex. She invites him to join her someplace and mysteriously alludes to them ‘making a splash’.

At the pool bar, Travis and Victoria flirt. Summer and Luca appear. Small talk is exchanged and Victoria introduces Summer to her ‘new man’. Luca pulls Victoria aside to ask what she’s doing – that guy tried to bring down their company. Victoria asks, “Our company? Who the hell do you think you are?” Luca maintains Travis is up to something; he can feel it. Meanwhile, Summer chats with Travis about Victoria, and warns him the family is protective of her. She asks how they met. Victoria and Luca rejoin them. Once alone, Travis wonders to Victoria who hates him more, Nick or Summer, and notes she has a judge-y family. Victoria gets a call and decides to take Travis to work with her. Elsewhere, Luca and Summer discuss Travis. Luca thinks she’ll lose interest in him. Talk turns to Summer’s parents. Luca tells her Phyllis arranged for her to go to Georgia to get her away from him. Summer rants about the things Phyllis did to break up Daniel and Amber; she’ll tell her to back off. Luca advises her not to; he can win her over. They kiss.

At Newman, Travis takes in Victor’s portrait and Victoria shares tidbits about her father. Travis reads a draft of a press release about the oil rig crisis and notes it’s a lie. Victoria justifies the choice as a defensive maneuver. Travis leaves. Victoria seems thoughtful.

At Crimson Lights, Dylan and Paul compare notes on Adam’s case. Dylan has three guys who have the skills to forge the journal. Paul tells him one of them, Frank Ellis, knows Victor. Dylan will look into it.

At the penthouse, Chelsea is frustrated that Adam is keeping something from her. He wants her to trust him. Adam gets a text from Michael, who has a strategy to discredit Meredith. Chelsea doesn’t pity her, and keeps prodding about what he’s planning regarding Ian. Adam admits he agreed to help him escape in exchange for his testimony. Chelsea rants that he’s insane. They argue. Chelsea points out if Ian goes free, nobody is safe, and anything he does is on Adam’s head. Adam thinks Ian will have to leave town and tries to downplay the risks. Chelsea says he sounds like Victor. Adam insists this is the way it has to be. Dylan arrives with news about a lead. He asks Adam about Frank Ellis. Adam already thought of that, but he’s dead. Dylan advises they might want to start considering a plea deal. Adam won’t confess to a murder he didn’t commit. Chelsea agrees – they’ll fight and win. Once alone, Chelsea says Ian is pure evil but she can’t lose Adam. He hugs her.

At Crimson Lights, Nick asks Dylan about Sharon, who didn’t seem like herself. Dylan confides that she’s having nightmares about Sage.

Lily, with Cane at her side, tells Devon, “The only thing wrong with Hilary is Hilary. She faked a fainting spell to get Jack’s attention.”

Hilary yells at Ashley and Neville, “My life is on the line and all the two of you do is fight me. I swear you probably want me to die.”

Kevin says to Mariah, “I’m not leaving until you tell me what’s going on.”