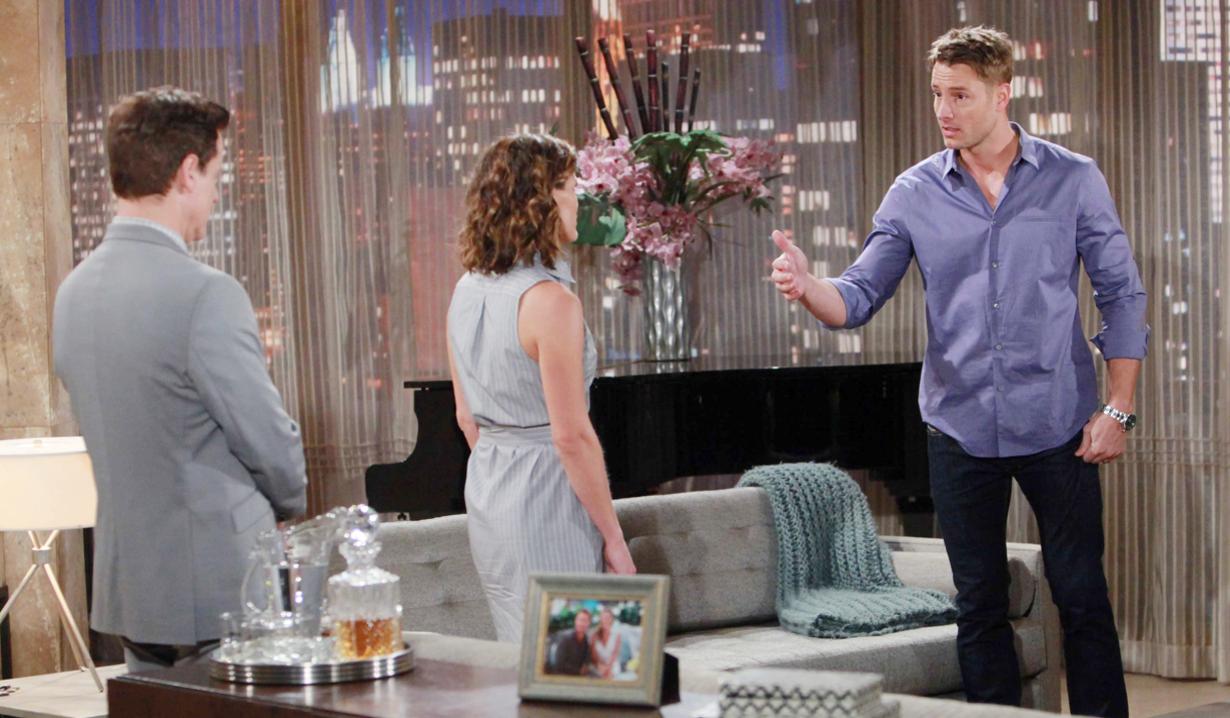 At Billy’s place, he and Phyllis are shocked to hear Jack at the door. Billy answers it, doing up his shirt. Jack wonders if he’s interrupting. He enters and Phyllis is nowhere to be seen. Jack talks about Bethany, who isn’t Victoria. On edge, Billy tells him to stop with the Victoria stuff. Phyllis listens as Billy says he wants someone who accepts him as he is. Jack thinks he wants what he has with Phyllis. Billy sighs. “Yes. That’s exactly what I want.” Jack goes on about his marriage as Phyllis cringes. Billy hopes he finds that someday, but feels he’s not worth it. Jack wants a fresh start, and assures Billy the right woman for him is closer than he thinks. Once Jack goes, Phyllis emerges. She and Billy debate about what to do. Billy feels something is pulling them together. Phyllis goes into his arms. Billy says it’s more than chemistry, they both know it. He’d do anything to wake up with her in his arms. Billy will settle for sneaking around if it’s the only way – it’s up to her. Phyllis leaves.

At the state pen, Ian is cynical about Adam’s offer to help him escape in return for his testimony. Adam wonders if he has a better offer. They spar verbally about who can trust whom. Finally, they strike a deal and give each other their word. In the infirmary, Meredith tells the warden she’s concerned about Victor Newman. The warden insists he’s responding to treatment and much-needed discipline – the guards haven’t heard a peep from him. He tells Meredith to go home, but first warns he’s heard rumors about her and Victor. “He’s not to be trusted.” In solitary, Victor bangs on the door to talk to the warden. When he arrives, Victor complains about Ian Ward having a plan. The warden wants proof. Victor talks about the good he’s done in the world. The warden brings up Meredith Gates. “I won’t let anyone take advantage of her.” He issues a warning to Victor and goes. Victor flashes to meeting with an unseen woman about getting revenge on his family members who testified against him – including someone she wants to punish as well – his son Adam. He recalls telling the woman about a forger who can revise the pages of someone’s diary, and a contact to make Constance’s body appear as though she was poisoned. “I know you’re the right person to do the job.”

At the penthouse, Chelsea and Michael debate about trusting Ian. Michael promises to defend him to the best of his abilities. Chelsea worries about Ian double-crossing them. Michael wants her to allow for the possibility of a favorable outcome. Adam arrives and says he struck a deal with Ian, who would be a fool not to keep up his end of the bargain. Michael leaves. Chelsea wants to know why Adam’s acting like he has the upper hand. Adam reassures her and they kiss.

At the Club, Christine and Paul discuss the dead lab tech. He wants to prove Adam was set-up – his gut is telling him he didn’t kill Constance. Christine thinks Michael should propose a plea deal…if not to Adam, to Chelsea. Meredith Gates appears and tells them that Victor told her he had proof Adam killed Constance. Paul and Christine advise her about Victor’s powers of persuasion. Gates warns about Ian’s plan to take the stand in Adam’s defense – he’s the reason Victor’s in solitary. Chris wonders if she’ll say all that under oath. Meredith goes on about Victor’s mistreatment at the hands of his family members before leaving. Paul tells Chris that she’s either brainwashed or is speaking the truth. Michael arrives to tell them about a new witness. They guess it’s Ian, and cite Meredith Gates as their source. Michael phones Adam – they have a big problem.

At Crimson Lights, Adam and Chelsea confront Meredith about testifying. She claims Victor is actually protecting Adam. Chelsea tells her she’s being played and to wake up. Meredith counters that Adam is just like his father – she’s being played. After, Chelsea asks Adam if she’s right. Adam protests that he is fighting for his life and if he has to get on Victor’s level to do it, he won’t apologize for that. Chelsea can’t be told for her own protection. He’ll call Michael and fill him in.

At the pool bar, Jack calls someone and plans a romantic weekend getaway in the Barbados for him and Phyllis. Later, Phyllis joins him. Jack tells her Billy is looking to find the kind of love and trust they have. He says he’s taking her on a romantic getaway this weekend. Phyllis says, “No. I can’t.” Phyllis lies that she has an out-of-town conference for Passkey. Jack steps away to cancel the reservations. Phyllis calls Billy and tells him she’ll be out of town for a few days…with him.

Dylan, at the penthouse, says he’s following up on a lead that may prove Adam was framed.

Luca questions Victoria about hanging out with the guy who tried to bring down their company. Victoria asks, “Our company? Who the hell do you think you are?”

Mariah hollers at Sharon, “There’s been an accident, it’s awful! You have to call 911 right now.”