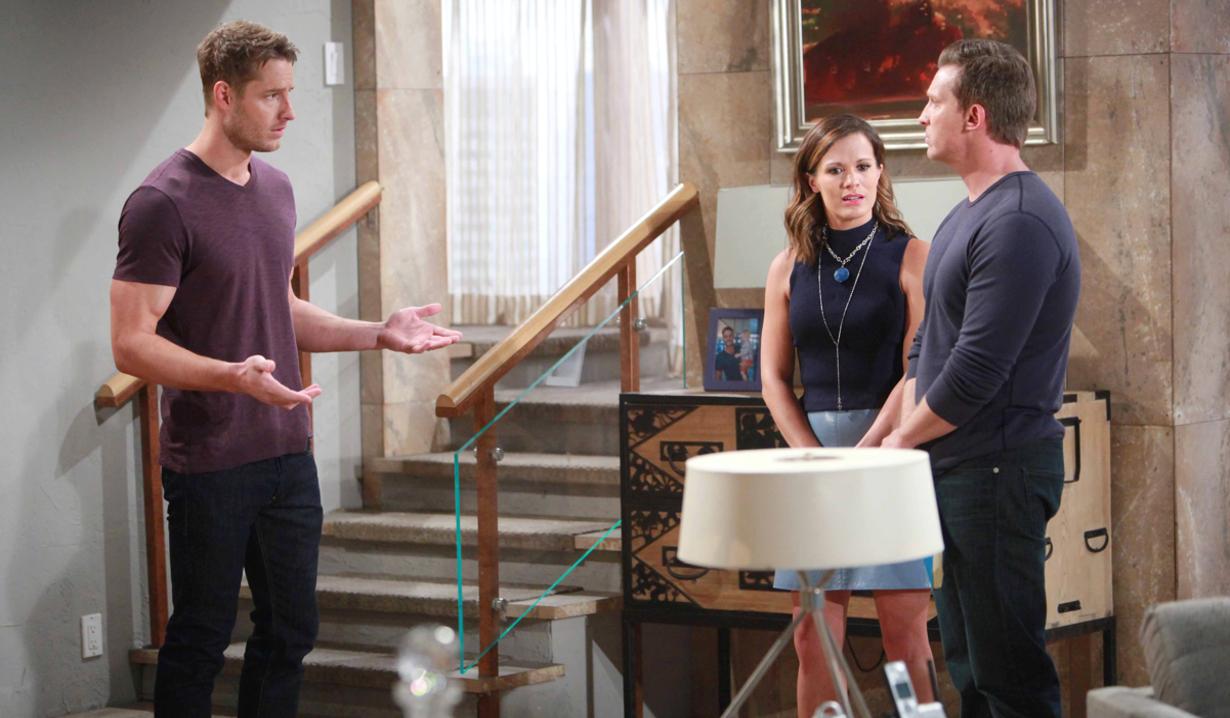 At the Club, Nikki is a little stunned that Michael has the divorce papers drawn up so quickly. He warns her that Victor’s feeling betrayed and suggests she put off filing. If she divorces him now, he may not forgive. Nearby, Luca and Summer congratulate themselves on the proposal for the energy executives. Luca wants Summer to take credit, but she’s worried she’ll be fired for going behind Victoria’s back. Luca snarks about Vikki being too busy with her personal life. Summer argues with him – her aunt is professional. Luca reiterates that Summer was right to look out for the company. Summer spots Nikki talking to Michael and complains she’s turning her back on her grandpa. She joins Nikki and tries to convince her not to file for divorce. Nikki has to do this. “For me.”

At Newman Enterprises, Victoria flashes to sex with Travis. An executive enters and compliments her on the proposal she sent. “It’s the kind of thing Victor would have done.” Once alone, Victoria calls Summer, but Luca answers. She asks him to tell Summer to get over there…now. After, Luca shows up alone. Victoria outs him for helping Summer write the email proposal and tells him his plan is transparent. She accuses him of using Summer. He admits to writing the proposal and claims he wants to help the company. He doesn’t think she’ll fire Summer. Victoria orders him to stay away from the company and stop using her niece. Luca warns her not to underestimate Summer, who is a direct conduit to Victor. “Why wouldn’t you use that to your advantage?”

At the state pen, Meredith pulls away from her kiss with Victor, who says it felt damn good. He talks about family and his children turning against him. It hurt more than he could have imagined. They discuss Victor’s relationship with Adam. Victor says he’s his most difficult child. Meredith points out that at least he shows up. He thanks her for the perspective and turns the topic back to kissing. They agree to keep things on a professional level. Victor learns he has a visitor – it’s Summer. She warns him that Nikki is filing for divorce. Summer can’t understand her; she can’t understand any of them. Victor doesn’t either. He thanks Summer for her loyalty. Later, Nikki arrives. She tells Victor she loves him. He barks, “Say it.” She tells him she’s filing for divorce – he won’t forgive her and she can’t live that way. Victor won’t fight her; there’s nothing left. They rehash what he did to Jack and have a big argument. Later, Victor returns to the infirmary to inform Meredith that his wife served him with divorce papers.

At home, Travis wakes up to find Victoria gone. She left her phone. Travis picks it up and sees a photo of Victoria, Billy, and the kids.

At Hank’s Bar, Victoria tells Travis she left her phone at his place. Travis produces it, shows her the screensaver of her, Billy, and the kids, and complains he doesn’t sleep with married women. Victoria insists she’s divorced and has to get back to work. Travis snarks. “Back to your real life.”

At the penthouse, Adam and Chelsea learn from Dylan that Constance’s body is being exhumed as they speak. Chelsea’s suspicious about him delivering the news in person. Dylan wanted to give Adam another chance to add to his statement. Adam thinks Victor had the journal doctored to set him up. Chelsea supports that theory. Dylan agrees if the autopsy shows no signs of foul play, they’ll drop the whole thing. Once alone, Chelsea turns to Adam. “You’re worried, aren’t you?” Adam’s just angry Victor would use Sage like this. He reassures Chelsea that he would never hurt Constance Bingham, and he’s not a killer. They puzzle over how and when Victor set him up. Adam thinks he had assistance from someone who wanted to prove themself.

At the Club, Dylan tells Michael he’s trying to figure out who Victor might be working with on the outside to frame someone, namely Adam. Michael confirms Victor’s out for revenge on his family. Michael gets up to speed on the accusations against Adam and thinks it’s a stretch that Sage kept quiet all this time. Dylan argues there’s a chance Adam did this. He gets a call with the results from the autopsy.

At the park, Nikki tells Summer she served Victor with papers and he didn’t care. Summer argues that he was devastated when she gave him a heads up. Nikki says that was an act. Nikki doesn’t recognize him anymore; he’s consumed with revenge.

At Newman Enterprises, Adam and Chelsea confront Luca, who admits he made some calls for Victor to get Adam fired, but says he knows nothing about a journal. Dylan arrives and places Adam under arrest.

Mariah tells Sharon, “I know a great way to make Nick feel better today. Tell him his son is alive.”

Nick says to Dylan, “After talking to Adam, I was just as certain that my dad set him up, but now I don’t know what to believe.”

Michael tells Victor, “All you have to do is admit that you set up your son. Right here, right now.”