Summary for Thursday May 5, 2016: Meredith explains her presence, Marisa warns Victor, and Michael reads Sage’s will. 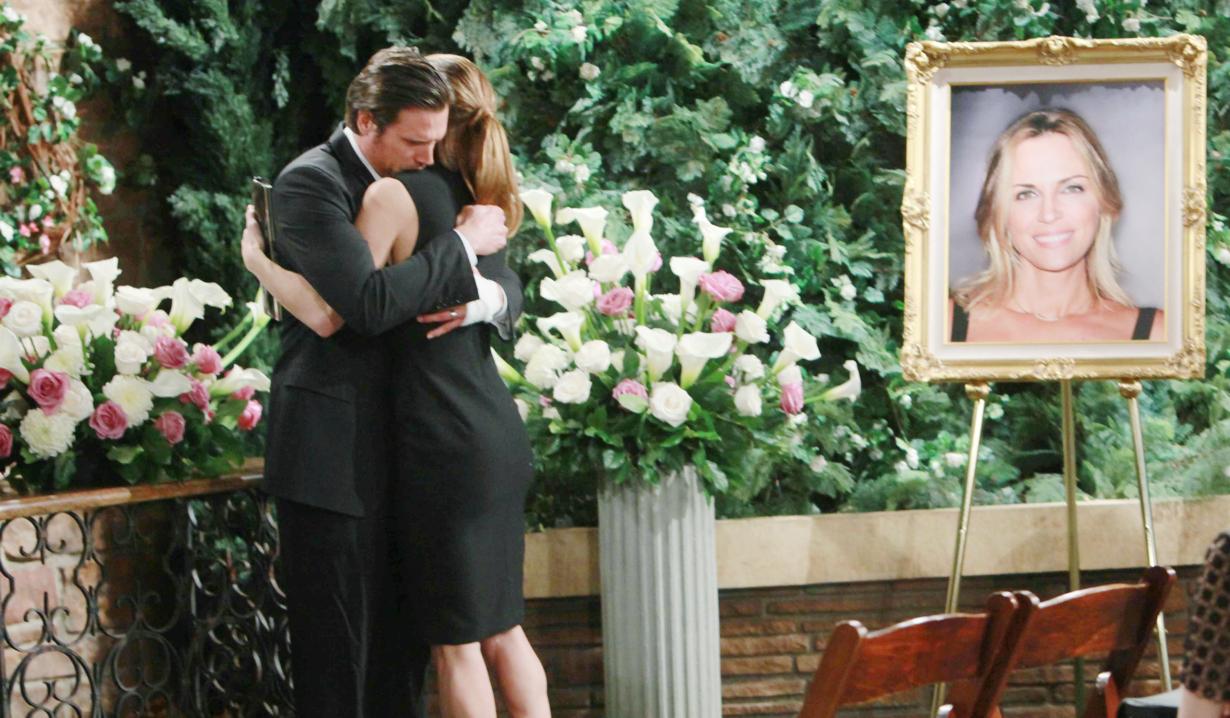 At the memorial, Sharon seems on the verge of a tearful confession. She glances at Dylan, and then tells Nick that he hasn’t lost everything because the truth is…everyone in that park is there for him; he’s not alone. Nick’s family members echo her sentiments. The service concludes. Michael checks in with Victoria about the reading of Sage’s will to take place at her office later. Adam asks Dr. Gates what she’s doing there. She says Victor asked her to come. Victoria gets confrontational. Meredith says Victor wanted her to tell them he loves them, and he hopes to repair his relationships with them. Debate ensues. Victoria knows he doesn’t want forgiveness, he wants them to bow down and kiss his ring, and that’s not going to happen. Adam agrees.

Breaking! Kelly Sullivan to Lifetime’s The Stranger Inside

At the state pen, Marisa warns Victor that Luca is manipulating Summer and using her to get into the Newman family. “He wants to sit in your chair, Victor.” Victor muses that a lot of people want to sit in his chair. “Good luck to them.” Marisa is irked he’s not taking her seriously. Victor implies she’s a golddigger. Marisa protests; she loves Noah. Victor asks her to tell Noah that if he and the others apologize for putting him in prison, he’ll forgive them. If they won’t, they’ll regret it. Later, Meredith returns and tells Victor it was a mistake for her to go to the memorial, as his family wasn’t receptive. Victor is glad it at least made her realize you can’t walk away from family. He mentions his own relationship with his own father.

In his suite, Luca pays a man for an envelope containing information. It’s evidence of Victoria visiting Hank’s Bar. Luca is upset that he didn’t go inside or find out more…everyone has a weakness. Downstairs, Lily reads the riot act to Charlie and Max over the fire alarm. Stitch runs up as Devon hollers that there’s a real fire. Later, the fire chief promises to find out how it started. Lily questions Charlie – is there something he’s not telling her? Devon intervenes. Charlie keeps mum. At the bar, Max whines to his dad that Lily blames him. Abby arrives as Devon and Lily learn that the computer servers were destroyed. Abby makes a call to Dylan and then tells Stitch she thinks Max set the fire. Stitch is upset. Abby says she asked Dylan to check the tapes and then a mysterious fire broke out in the server room – she’s not crazy.

At home, Dylan compliments Sharon on what she did for Nick at the memorial. As he checks his phone, Nick arrives to see Faith. Sharon says she’s napping. Dylan leaves for the Club. Nick tells Sharon she needs to be at the reading of Sage’s will. Sharon acts panicky. Nick thinks it might give her closure to hear Sage’s final words.

At the Club, Abby asks Lily if Max overheard about the police investigation. Dylan appears. He wants to talk to Max, which makes Stitch so angry he leaves with Max. Dylan learns the fire was deliberately set. He’ll find out who did it. Upstairs, Summer fills Luca in on the memorial. He muses that Nick will probably take a leave from Newman. Summer goes on to tell him about the prison woman upsetting Victoria. Luca barks questions at her. Summer wonders why he’s so interested. Luca admits to visiting Victor and feels the other shoe is about to drop. Summer wants to know why he visited her grandfather. He wants Victor’s trust to protect her interests. Summer wants the family to value him like she does. In another suite, Max swears to Stitch that he’s innocent. Stitch believes him.

At Newman Enterprises, Michael reads that Sage wants Victoria to comfort Nick. She leaves the necklace Nick gave her on their wedding day to Faith. Sharon learns she left the vintage toy car Victor gave Christian to Sully. Nick gets the remainder of Sage’s estate, along with a letter. Nick reads it. She gives him one more ‘I love you’, one more reminder of their beautiful memories, and one more thank you for giving her an amazing family. Sage urges him to go find happiness. Michael says there is another letter…addressed to Adam. It’s for his eyes only. Adam tells Nick he’s sorry Sage never got a chance to grow old or to raise the family she wanted. After, Victoria and Nick discuss Sharon standing up at the memorial. They wonder if there was something else she was going to say?

At the park, Marisa informs Noah that she warned Victor about Luca and Summer, and sensed that he has a plan to get out.

At the penthouse, Adam opens the letter and learns Sage knew he was Christian’s father. She was grateful he changed the test results. Chelsea reads that Sage wants him to keep the secret so as not to hurt Nick. This makes them wonder about her voicemail. Adam says whatever she wanted to tell him died with her. He burns the letter.

Phyllis hisses at Jack, “That was all you, so whatever fresh hell is about to unfold, don’t you dare blame it on me!”

Dylan tells Stitch, “The arson crew found evidence that the fire was deliberately set. I need Max’s fingerprints and a sample of his DNA.”

Y&R Day Ahead Recap: Dylan gets...