Y&R Day Ahead Recap: After Sage confronts Sharon about Sully, there’s an accident…

Summary for Thursday April 28, 2016: Victor drops a bombshell, Sage confronts Sharon about Sully really being Christian, Abby's reeling from her miscarriage, and there's an accident. 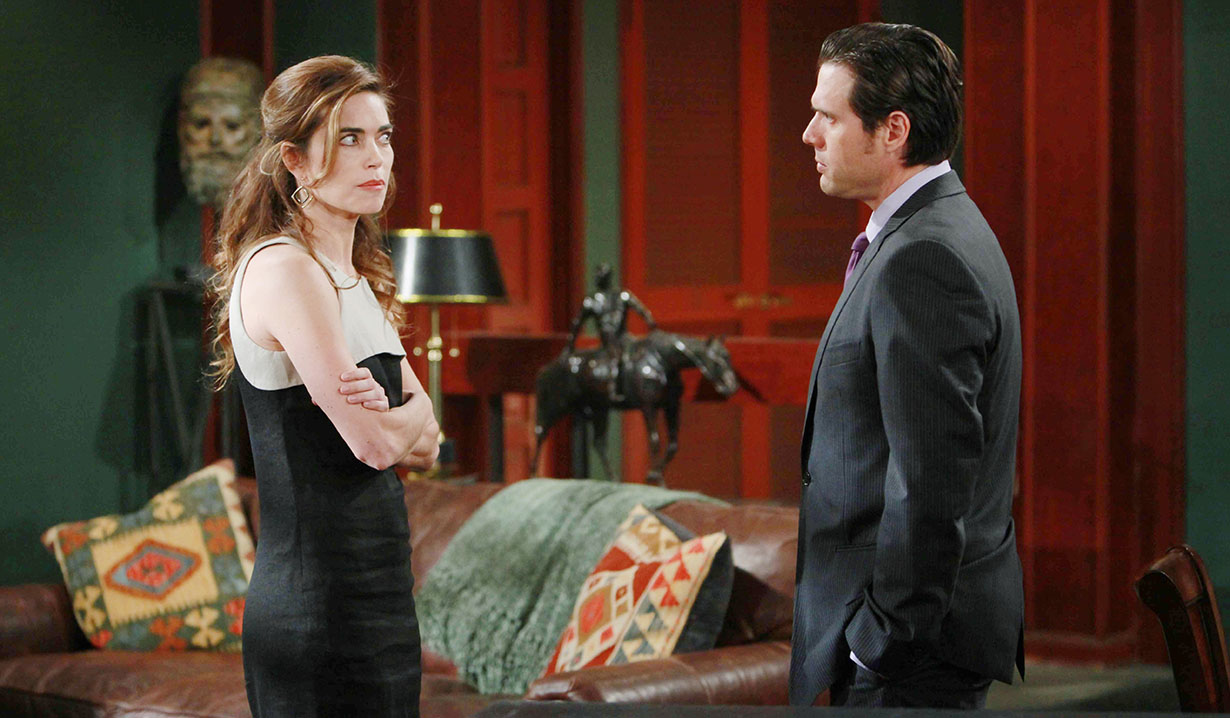 In Victoria’s office, Dylan asks Nick for parenting advice when Victoria bustles in and dramatically announces that somebody’s trying to steal her baby, Brash and Sassy, which is up for sale. Dylan’s sorry to hear and takes off while Vikki and Nick try to figure out whose handiwork this is.

At Sharon’s, Sage holds Sully and tells Sharon she knows she’s a ‘cold-hearted backstabbing liar’, causing Sharon to ask where this is coming from. Sage spits, “This is not your son, Sharon, he’s mine!” Sage wants to see the DNA results from the “cold, vicious monster.” Sharon opens and closes her mouth a few times then finally admits the baby is Sage’s. Still, she wants to hold him, worried he’ll become upset. “He needs his mother.” Sage clarifies, “I. Am his mother.” Sage puts him down and Sharon says she has done nothing wrong. Sharon had no idea until she got the DNA results today. When she suspected something was wrong at the hospital, Dr. Anderson would drug her so she couldn’t think straight. Sage has no sympathy. She overheard Sharon and Mariah talking about Sharon’s miscarriage. If she had told Dylan, none of this would have happened. When Sage vows to take the kid, Sharon grabs him. She just wants to talk before her husband returns home and her baby’s gone. Sage runs to tell Nick. Once she’s gone, Sharon gets in the car with the baby. They need to stop Sage.

Where are they now? Corbin Bernsen (Father Todd) in new Hallmark Movies & Mystery

Meredith Gates finds Victor on the phone in her office in prison and asks who authorized this. Victor muses, “Sometimes one needs to make oneself heard.”

Billy interrupts Jack and Phyllis’ dinner at the club. Billy thinks Jack owes him. He wants a big-assed severance package to the tune of 10 million. Jack and Phyllis find that a rather large sum. If Billy doesn’t get the money, he’ll sell his stock in Jabot. He gives them time to think it over and goes.

At Crimson Lights, Ben coaches Max on how to act when Abby gets there. Once she arrives, they suggest a picnic in the park. Abby’s not interested and accuses Ben of trying to move on too soon. Max toddles off and Ben apologizes. He thought this is what she’d want. Abby becomes a little emotional. She doesn’t want to obsess but can’t help herself. Nothing will be the same again for her. They hug. Dylan strolls in. Abby takes a call from Victoria who asks if she knew Brash and Sassy was up for sale. Abby didn’t know but admits she sold her voting rights to Victor out of guilt. Victoria’s furious but Abby doesn’t give a crap. She has other things to worry about. Victoria’s sorry for being insensitive. They disconnect and Abby goes to Max with an apology for freaking out when the picnic was mentioned. She knows having a step-parent can be hard. She tells him she knows he put something on the stairs to make her fall. Max denies it and runs to his dad whining about the accusation. Ben takes him home.

Back at the prison, Victor explains to Gates that since his daughter betrayed him, she’s now facing consequences. Meredith examines him and he thinks that he just struck a nerve with her. He asks after her personal life. She admits her brother had a drug problem and got sent to prison. Her father did nothing and now her brother’s dead. Victor identifies with her dad. Meredith cries as she tells Victor how kind and generous her brother was. She laughs when Victor charms her, asking if he had a smile like hers.

Back at Newman, Victoria tells Nick their mom handed her proxy to Curtis Fielding at Victor’s behest and Victor convinced him to sell. Victoria’s hurt so Nick goes off to fix it. Victoria calls and doubles the price of the sale.

Phyllis shows up at Billy’s and tells him Jack’s going to give him the cash. Billy’s excited. She asks what the real reason is he needs it.

Nick arrives at prison to confront his dad and asks him to call off the sale. Victor refuses. He’s trying to ensure Newman ends up in Nick’s hands.

Ben and Max arrive at the club. They’ll stay the night and give Abby a chance to cool down. Nearby, Phyllis returns to Jack and says he won’t like what Billy’s using the money for.

Billy goes to Victoria at Newman with a grin on his face. He bought Brash and Sassy!

On the road, Sage makes a call to Nick but drops her phone. When she goes to retrieve it, she swerves and crashes. Sharon, in her car, gasps.

Phyllis tells Jack if there is anyone Billy wants revenge on it’s him.

Sharon calls 911. “I’m on highway 11. The car in front of me crashed. The driver’s hurt.” Sage lays unconscious on the ground.

Nick picks up a call from Paul.