Y&R Day Ahead Recap: Drama abounds at the Passkey launch

Summary for Friday April 1, 2016: Summer receives a warning about Luca, Dylan presses Sharon to remember the night she had Sully, and Sage gets panicky about Shawn and David. 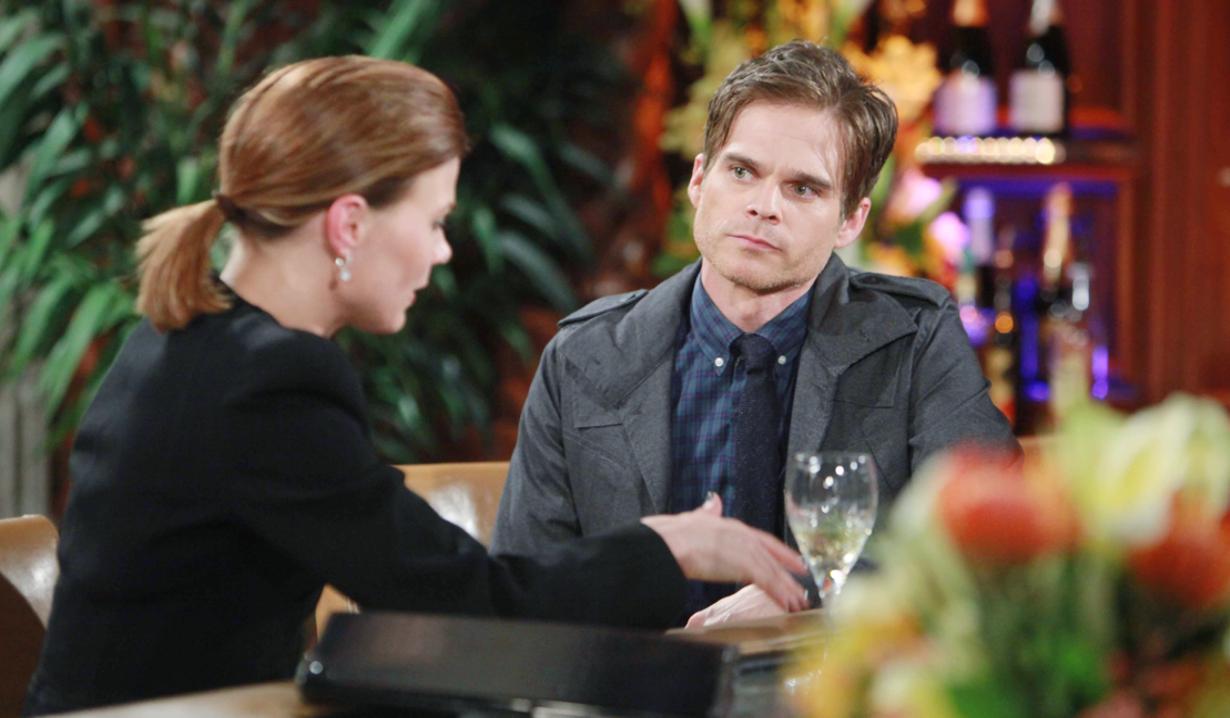 Summer runs into Luca at Crimson Lights. They debate over whether he’ll still be welcome at Jabot after outing Phyllis’ plot in court. Summer decides to accompany him to the press conference. On the patio, Billy flashes to kissing Phyllis. Jack appears.

In the state pen, Victor tells his chatty cellmate he’s not there to make friends. They establish that Victor’s a big deal, but the cellmate warns he’s nothing in there and will need protection. Victor mocks the guy – he doesn’t need his protection – and warns him to watch his ass. Later, the inmate threatens Victor with a weapon and Victor punches him out. The inmate gasps, “He’s not going to like this.” A guard takes Victor away. Back in his cell, Victor smirks at someone. “So it’s you. I should have known.”

CASTING: Y&R is casting an actress to play a new role

At Sharon’s place, she tells Mariah what happened with Shawn. Dylan arrives and learns Shawn had the baby. Sharon says Nick and Sage could lose their baby and it’s her fault. Mariah urges happy thoughts and leaves. Dylan gets off the phone and tells Sharon the baby is stable. Talk turns to staying out of Nick and Sage’s business. Sharon protests that Nick is the father of her children. Dylan replies, “So am I.” Sharon regrets talking to Shawn, and wonders about her nightmares. Dylan fears Dr. Anderson was up to more than just making a move on Nick. He confides he visited his Aunt Patty, who kept talking about ‘the baby’. He also talked to some of the staff that worked closely with Dr. Anderson – none of them recall Sharon giving birth. He urges Sharon to try to remember. Sharon recalls video chatting with Dylan, then being fuzzy, and later holding Sully. She is unable to recall labor or giving birth, but says someone else was there, watching. “The nurse.”

At the Club, Phyllis toasts with Kevin as Victoria appears. The two women debate whether the good guys won since Phyllis manipulated Michael. Phyllis regrets that, but says Victor got what he deserved and it’s not over. Victoria learns they’re preparing to announce the launch of Passkey. Phyllis says it’s Billy’s dream coming true. Billy and Jack arrive. Victoria takes Billy off to talk and Phyllis and Jack bicker about Passkey. Jack lectures about ending the feud. Mariah arrives and joins Kevin and a nervous Natalie. When a reporter arrives, Kevin and Luca disagree about who should go on camera. Luca approaches Jack, who unceremoniously fires him. Summer wonders if he’ll fire her mom too. Phyllis wonders the same thing. By the stairs, Victoria confronts Billy about passing off a stolen project as his own – she’s running Newman so it hurts her. They argue heatedly until Kevin calls Billy away. Near the door, Mariah and Summer discuss Jack firing Luca. Mariah realizes Summer is attracted to Luca and warns he’s dangerous and will hurt her. Elsewhere, Victoria approaches Jack to stop the launch, but he refuses; it’s already in motion and Jabot needs it. He urges her to let Billy have this and not do what Victor would do. Phyllis kicks off the launch, and Kevin steps in to help Natalie explain it in layman’s terms. Luca rejoins Summer and alludes to problems they’ll have with Passkey – it’s too bad they fired him; they’ll need him. Meanwhile, Billy speaks and Victoria interrupts, calls him a liar and a thief, and slaps him. She tells him, “You want a war? It’s on.”

At the hospital, Sage and Nick assure Shawn they’re not keeping anything from her but it’s best she doesn’t see the baby just now. Shawn retorts, “Best for who?” She insists they can’t stop her from seeing David – he’s her baby. Nick goes to arrange it. Sage follows and protests – she’ll want to keep him. Nick says it’s a chance they’ll have to take. Resigned, Sage goes for the nurse. After, Sage and Nick watch as Shawn sees the baby in the incubator. She thinks David knows she’s his mom. In the hall, Sage panics, but Nick urges her to give Shawn the time she needs. Sage feels she’s become a monster. Nick reassures her; she just wants to be a mother. Later, the nurse that helped Dr. Anderson arrives to take David, but Shawn says no.

Dylan approaches the nurse. “Detective McAvoy, GCPD. I’d like to ask you some questions.” The nurse looks nervous.

Jack barks at Billy to start taking this seriously. “Find Victoria. Work it out!”

Victoria says to Michael, “What if I offered you half a million dollars to come back to Newman?”