Summary for Thursday March 31, 2016: Kevin, Mariah, and Natalie have reason to be excited, Sharon feels guilty after Shawn goes into labor, and Billy and Phyllis can’t forget their kiss. 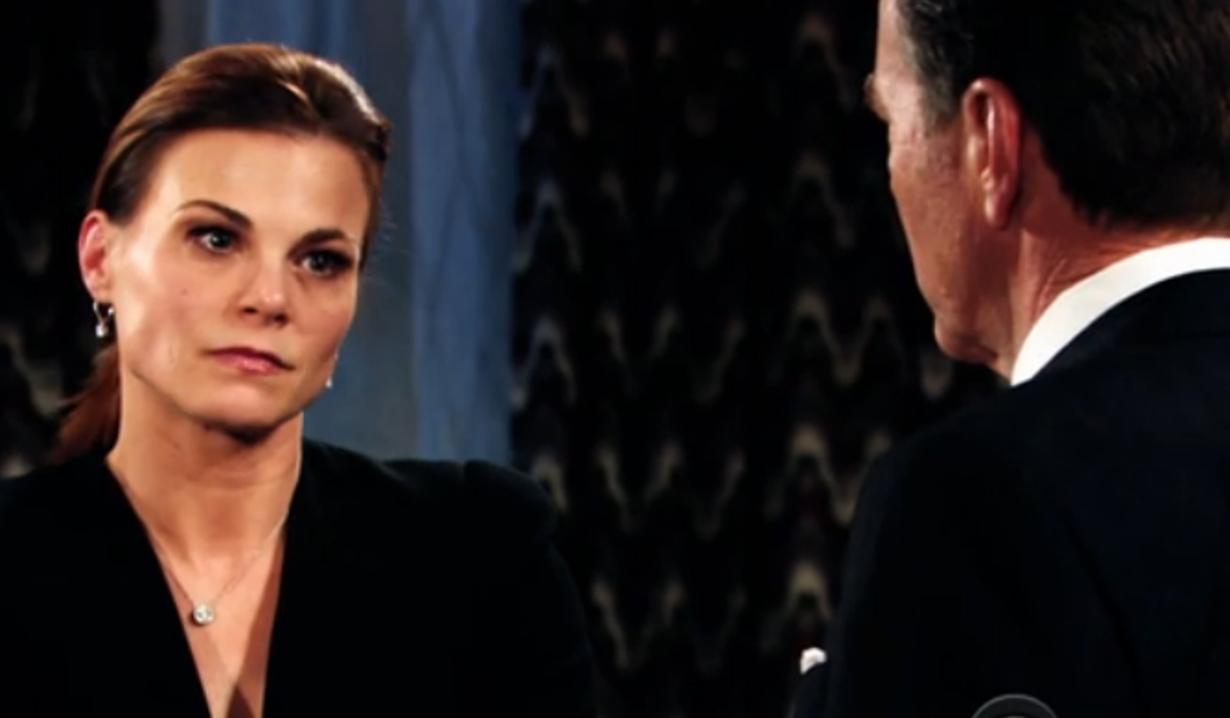 At Billy’s house, Phyllis tells Jack that Victoria walked in on something private between her and Billy. She doesn’t think Jack wants to know. Jack hollers, thinking they’re up to more scheming. Phyllis says she came to Billy because he gets it and doesn’t judge her. Jack assumes Billy fanned the flames, but Phyllis corrects him. Jack apologizes. He heads for the door and Phyllis and Billy exchange a long look and flash to kissing.

At the Club, Kevin, Mariah, and Natalie discuss the revelation that Victor Newman is going to prison. Kevin worries about Michael getting disbarred. They wonder what it all means for them. Mariah feels Victor will grind them to dust if given the chance. Jack and Phyllis sit down nearby. Mariah realizes that Jack might agree to release Passkey now that Victor’s in prison. At Jack and Phyllis’ table, they discuss Victoria stirring up drama. Jack is glad Billy gave Phyllis good advice, but it’s time to put revenge in the past. Phyllis informs him she’s not over it – Victor must suffer until there’s nothing left. “I am going to destroy Newman Enterprises.” Jack gets upset; this is consuming her. Phyllis rants about protecting Summer. Jack says she sounds like Victor. He pleads to end this war. Phyllis will when she has Newman into the ground. Jack argues that innocent people will get hurt. Phyllis tells him if it’s too upsetting for him, fine, but she’s doing it.

Mariah, Natalie, and Kevin arrive at Billy’s place. They are fired up about launching Passkey. Billy is far less enthusiastic, but upon thinking it over suggests they roll it out tonight. He leaves Phyllis a message to call him and talks about calling a press conference. Natalie gets emotional – it’s her big moment – and hugs Kevin. Later, Jack visits Billy to inform him Phyllis is still bent on revenge. They bicker. Billy suggests they launch Passkey to distract her. Jack wants no part of the stolen program and tells him he’s just like Phyllis. Billy gets angry – Passkey was taken from him. He says Jack is like a scared little boy in the corner and suggests he let them handle Jabot.

At the Club, Phyllis is at the bar thinking about the kiss with Billy when Kevin, Mariah, and Natalie appear and fill her in on the plan. She muses that Billy didn’t let her down. Kevin thinks Phyllis, Billy and Jack should present it. Phyllis and Kevin toast to the ultimate victor and sweet, sweet revenge.

At Sharon’s place, Nick opens up to Sharon about Nikki drinking again. Sharon is stunned to hear Victor was convicted and given 10 years. She assures Nick this was not his fault. Nick doesn’t know if his family will make it through this time. He wonders what the point of it all was since prison won’t reform his father. Sharon says it was justice and reassures Nick he’s not like his dad. Nick hopes the adoption works out – he could use some joy.

At Crimson Lights, Sage and Shawn chat happily. Sage produces the adoption papers. Shawn wants to wait, but assures Sage she won’t change her mind. Sage gets a text and leaves. Shawn stares at the envelope. Sharon arrives and Shawn tells her Nick is great. Sharon confides that she gave Cassie up for adoption. Shawn questions her about changing her mind and taking her back. As they talk, Shawn becomes agitated and doubles over in pain.

At home, Sage and Nick are in bed together when Sharon calls that Shawn is in labor. Sage frets that it’s too soon. “It’s happening all over again.”

At the hospital, Sage stays with Shawn while Sharon updates Nick in the hall. She thinks her adoption talk upset Shawn. Sage emerges as Shawn is wheeled away. Sharon is sorry. Sage asks, “Is this your fault?” When Sage learns Sharon told Shawn she regretted the adoption she hollers. Nick calms her. They head off to see the baby in the NICU and then check on Shawn. They tell her David is tiny but tough. She demands to see her son.

At Sharon’s place, she tells Mariah she wanted Nick to feel joy again, but she messed it all up. She worries she’ll be the reason Nick loses his baby.

Get more information on what’s ahead through Y&R spoilers.

Dylan asks Sharon, “Shawn had the baby?” Sharon replies, “Nick and Sage might lose their little boy and it’s my fault.”

Shawn asks Nick and Sage, “What aren’t you telling me? Is there something wrong with him?”

Victor is threatened by a fellow prison inmate.