Y&R Day Ahead Recap: The verdict is in for Victor Newman

Summary for Wednesday March 30, 2016: Victoria gives Billy a housewarming gift, Jack intervenes with Nikki, and Michael and Lauren look to the future. 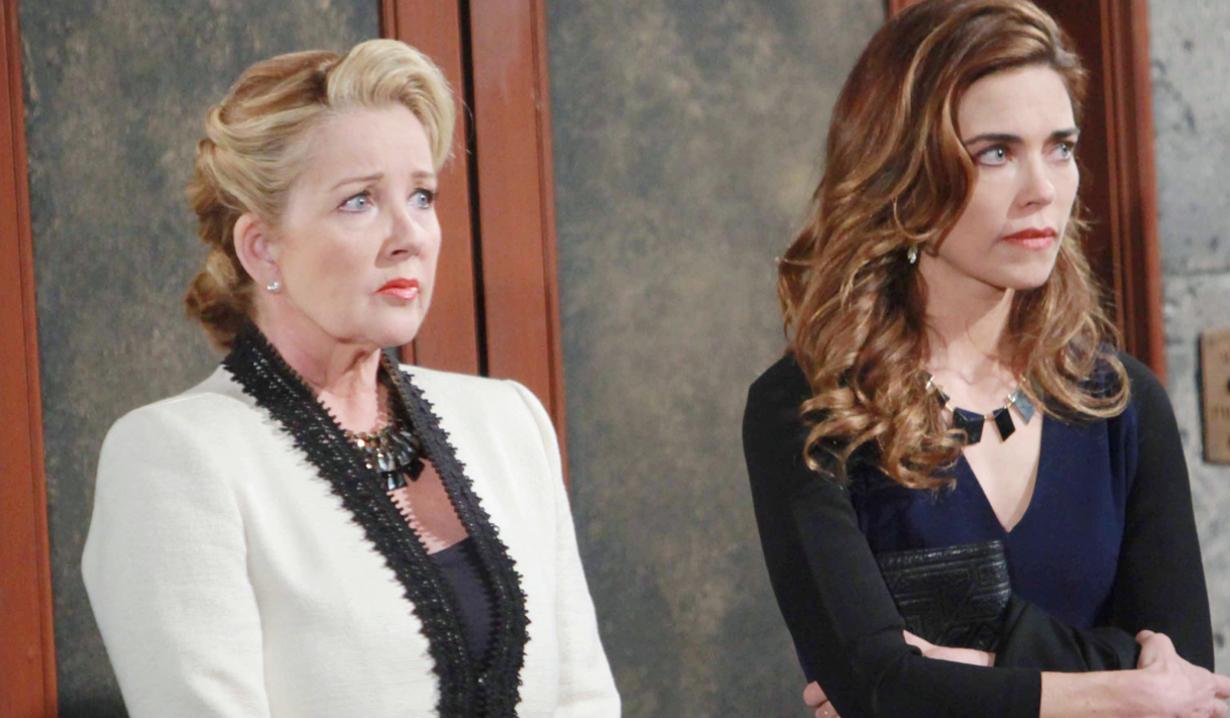 At the Club, Jack encourages Nikki to drink a coffee and face her fears. Nick appears. They’re all afraid that Victor will go free. Nikki gets upset to learn that Jack called Nick. Nick wants to take her home, but Nikki doesn’t know where that is. She rants about the old house that Nick’s ex-wife burned down, and then laments about turning her back on Victor. They reassure her – she did it out of love – and then learn the verdict is in.

At Billy’s house, Victoria walks in and sees him comforting Phyllis. She notes they’re alone together again. “At least this time you’ve got your pants on.” Phyllis talks about her regrets to Victoria – no one understands this blowing up in her face but Billy. Phyllis gives them time alone. Victoria tells Billy she likes what he did with the house. She says she spoke to Jack about ending the feud between the families. Victoria then puts her wedding ring in his hand. “A little housewarming present for you.”

At Crimson Lights, Lauren and Michael discuss it being all over town what happened at the trial. Michael says the process has begun to have him disbarred. Lauren pledges her support. Michael talks about the mistakes he made, and then turns his thoughts to the freedom he will have. He tells Lauren, “All of this is all yours…all the time.”

At the penthouse, Chelsea and Adam hear on the TV that the jury is back in Victor’s case. Adam’s done with Newman regardless of what happens. Chelsea sends him to face his demons and see Victor carted off to prison.

In the courtroom, Summer tells Victor she thinks the jury’s quick decision is a good sign. Victor thanks her and Abby for their support. Summer can’t imagine what a future without him would even look like. Victor assures them they will always be a part of his life. He tells them they’re beautiful bright girls, but he’s not sure what will become of the rest of them. In the foyer, Nick, Nikki, Victoria, and Jack convene. Adam arrives and gets the okay to sit with Jack, who urges him to join his family. Phyllis and Billy join Jack. Billy won’t stay for the verdict. Once everyone is seated, the judge tells Victor to please rise. He announces that Victor has been found guilty of all charges. Victor wants to address the court. He says he doesn’t expect mercy, that’s for the weak, and he is in fact guilty – guilty of loving his family, which he thinks maybe they’ve forgotten. As he speaks, Nikki, Nick, Victoria, and Adam flash back to memories with Victor. The judge informs Victor that his love wasn’t on trial, his actions were. He’s sentenced to 10 years in the state prison. Victor wonders if Phyllis is happy now. She hisses that it’s a start. Chris follows her and Jack out and calls her a crappy friend for what she did to Michael. Phyllis leaves to find him. Victoria joins Jack to discuss Nikki’s drinking. She tells Jack he has his own family to worry about – she found Phyllis with Billy earlier and thinks it might have been something different than a business venture they were up to. In the courtroom, Victor asks for a moment with his family. Nikki, Victoria, Nick, Summer, and Abby are there. Nikki, Victoria, and Nick each say something heartfelt. He informs them he doesn’t have a family anymore. “You’re all dead to me.”

At Crimson Lights, Chelsea and Billy discuss Victor. She wonders if there’s still a chance for him and Victoria. He shakes his head; she gave him his ring back. Chelsea explains why she sent Adam to the courthouse. They hope Victor will be found guilty.

At the Club, Michael tries to put a positive spin on the future, but Lauren knows he’s scared. Phyllis appears – they’ll fight the bar association. Lauren tells her she’s done enough. Phyllis is apologetic. She shares that Victor was found guilty and got 10 years. Michael grins. After, Michael admits to Lauren he is afraid – if he’s not a lawyer, what is he? Lauren assures him he’s so much more than a framed piece of paper. Michael tears up. She will always be by his side. Michael would be lost without her.

At home, Adam fills Chelsea in on the Victor news. Chelsea wonders if he’ll serve the time. Adam reminds her this is Victor…this isn’t the end; it’s just the beginning.

At Billy’s place, Jack shares the news about Victor – he’s surprised Phyllis didn’t come right over to tell him. Billy learns Victor implied something was going on with them and made it sound like it had nothing to do with business. Phyllis arrives. “Because it didn’t.”

Natalie tells Kevin, “This is my moment, and I owe it all to you.” She throws her arms around him as Mariah looks on.

Nick, in bed with Sage, gets a call from Sharon, who tells him Shawn is in labor at the coffee house.

Posted 32 mins ago
Posted on: Deadline