Summary for Tuesday March 29, 2016: Victoria lashes out at Nikki, a name is chosen for Shawn’s unborn baby, and Billy supports Phyllis. 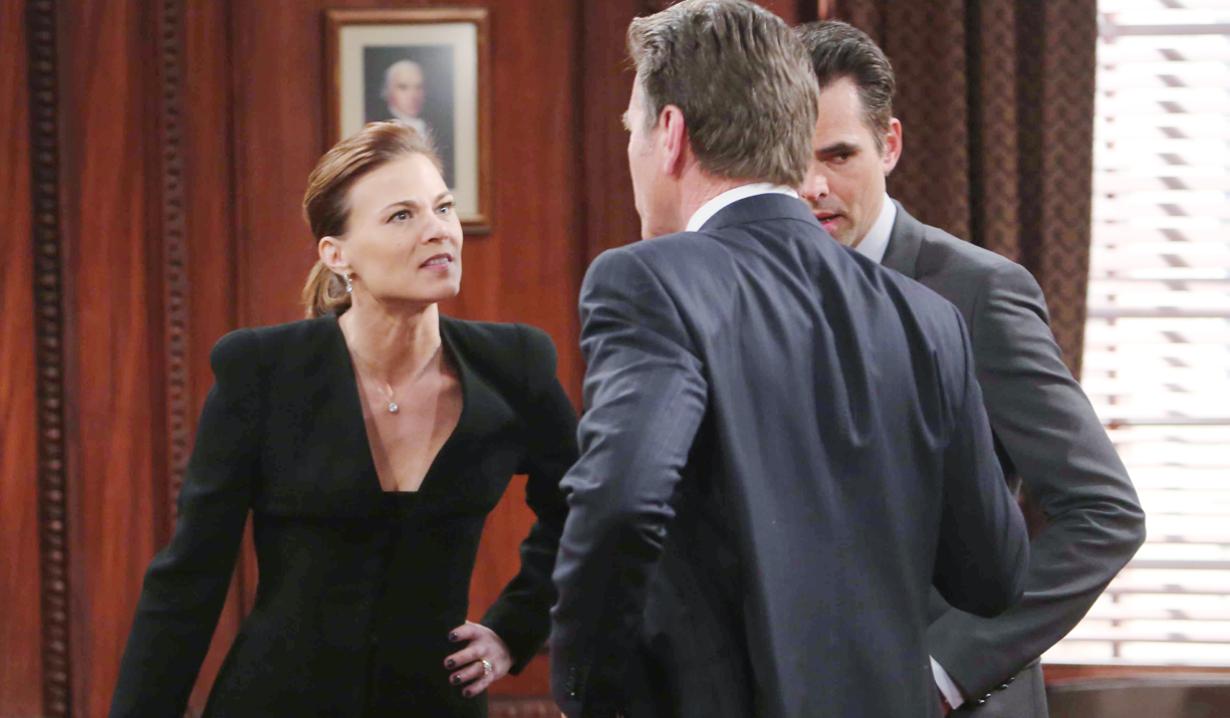 In court, the judge instructs the jury. Nikki and Nick step out. She worries that Victor will go free and there will be retribution for all of them. Nick asks if she had a drink today. Nikki warns him not to get sucked back in. Inside, Victor snipes at Victoria, Phyllis, and Adam before exiting with the bailiff. Christine confronts Phyllis about possibly destroying Michael’s career, and says if Victor goes free it’s all on her. In the foyer, everyone except Billy, Jack, and Phyllis debate about the events of the trial. Summer defends Luca, and Nick explains why Michael would choose to help Phyllis. Adam is confident the jury will convict Victor. Inside, Phyllis tells Jack she doesn’t regret anything she did. Jack complains that she tainted the case and jeopardized Michael’s career. They argue heatedly. Billy hears Jack holler at Phyllis that she’s pushing him away with these tactics. Phyllis leaves, upset. Jack tells Billy he’s not sure there’s a sentence Victor could get that would satisfy her. In the prisoner’s room, Victoria wants to know what Victor will do if he’s released – will he give her options? Victor will forgive her if she can forgive him. They discuss Newman. Victor expects she would lead the way for him to be reinstated, and then it would be business as usual. Victoria declines. Victor says she’ll be removed from the company and disowned then – she can tell the others that applies to them as well. She asks about Nikki. He’ll probably never get over her profound betrayal. Before she leaves, Victor says he’ll always love her, but this is business.

At Sage and Nick’s apartment, Faith is excited for when the baby comes home. Shawn feels it will be a great home. Sage is taken aback when Shawn announces she’s thought about a name. She listens as Shawn tells Faith about her grandpa, Big Dave. Sage likes the sound of ‘David’. Nick arrives and they discuss it with him. He is okay with David. Sage takes Faith home. Nick wipes some paint off Shawn’s face. She gazes at him. They talk about family and parents. Her father wasn’t supportive. Nick speaks about taking care of family members and Shawn tears up. He takes her hand. Sage returns. Nick gets a text and leaves. When Sage goes upstairs, Shawn tells ‘Little Dave’ she’ll always think about him and hopes he will forgive her for walking away. Sage hears.

At the penthouse, Chelsea and Adam rehash the trial. Chelsea liked what Nick said, and is proud of Adam. She questions if it’s truly over, and panics that Adam might make another play for the company. Adam kisses her and says, “No.” After, he watches a report about the company suffering loss after loss.

At the Top of the Tower, Victoria reports to Noah and Nikki that Victor is itching to disown them all. She explodes at Nikki for taking a drink on today of all days – she couldn’t have done more to help Victor’s case. Noah reminds Vikki it’s Victor she’s angry at. Nikki knows he made Victoria feel empty and helpless – she’s been there. Later, Jack joins Victoria and asks after Nikki. They’re both worried about her. Vikki admits she basically accused her of breaking her sobriety to help Victor’s case. Jack sympathizes with what Vikki’s gone through, and laments the way Billy and Phyllis have handled things. They discuss Billy. Jack urges her to give him a chance. Vikki tells Jack if her father is put away, she wants to end the Newman/Abbott war. Jack likes it. He thinks she should tell Billy.

At the Club, Noah canoodles with Marisa. They head to her room. Nikki enters and makes for the bar. “Vodka with a twist of lemon, please.” By the time Jack arrives, she’s tipsy and rants about Victor before admitting she’s scared.

Billy finds Phyllis drinking wine at his house. She talks about Victor being the devil incarnate. Billy thinks she should be with Jack. Phyllis agrees, but she’s not. “I’m here. Why do you think that is?” Billy muses that misery loves company. Phyllis regrets bringing Michael in, and doesn’t know how to react if Victor walks. Billy went through it with Adam – the only way to move forward is to forgive Victor. She doesn’t know how to forgive him or make these feelings go away. She cries. Billy holds her. Victoria arrives.

In the prisoner’s room, Victor learns the jury has reached a verdict.

Victoria says to Jack, “I went to his place and he was there with Phyllis.” Jack asks, “Do you think those two are up to something?”

The judge says, “Victor Newman, on the charges of kidnapping and fraud the jury finds you…”