Summary for Monday March 28, 2016: Arguing breaks out during the trial and the judge has difficulty getting everyone to calm down. 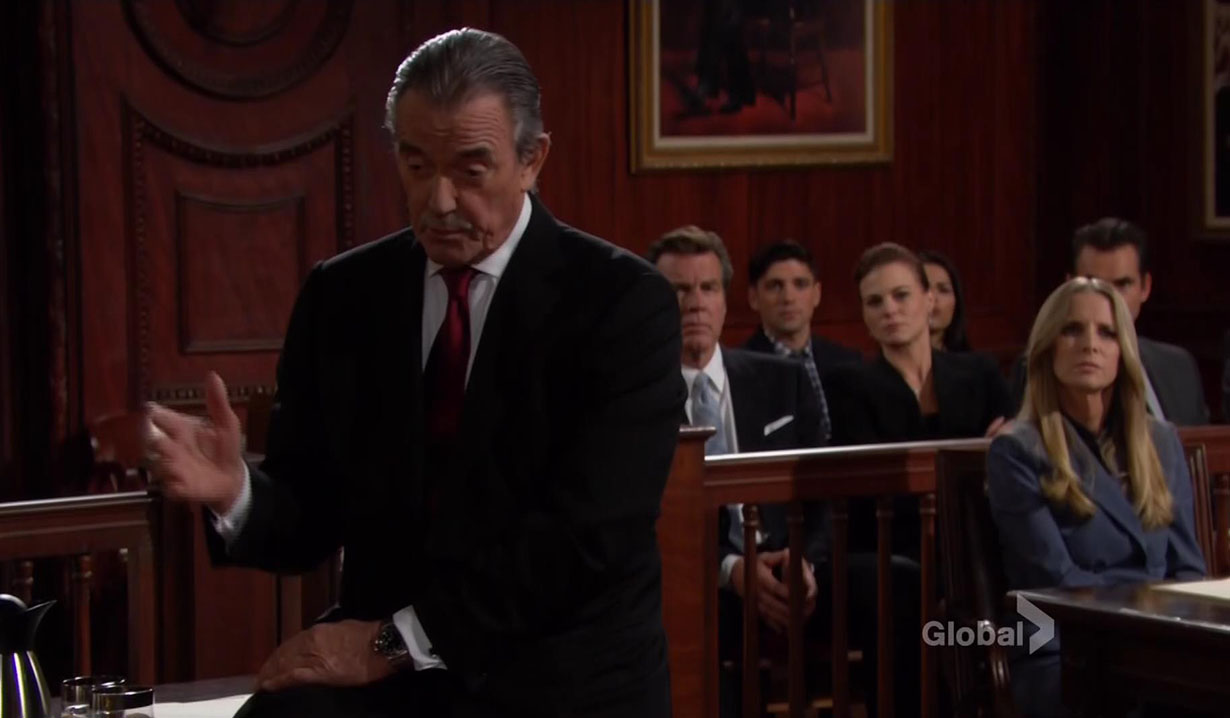 In court in Genoa City, Victor yells that Phyllis concocted this entire scheme. Jack gets up and asks Christine to stop this. Victor continues to yell at everyone and finally, the judge calls Victor out of line. He clears the courtroom. Outside, the arguing continues between Luca and Jack. Michael knows Luca is the rat though he denies it. Summer’s not sure who to believe and runs off. Michael says nobody will trust Luca again. Luca scoffs at that. It’d be a miracle if Michael isn’t disbarred. Back inside, Victor wants to continue. Later, Christine and Phyllis are alone in court. Phyllis wonders if she sabotaged the case. She asks Christine not to make Michael the scapegoat in all of this. He was looking for justice. Christine snarks at that and reminds Phyllis how she has evaded justice in the past. Outside, Jack can’t believe he signed off on Phyllis’ plan. Billy thinks the trial will give Phyllis closure.

Nikki, Abby, Victoria and Nick have coffee at the Top of the Tower while they discuss the horrors of their day. Nikki feels she’s deluded herself by assuming this trial would make Victor quake in his boots. Nick says his father will never change. Nick goes to take a call from Sage and Nikki eyeballs the vodka bottle behind him. She orders a drink and downs it in three seconds flat, then goes back to court with Nick.

Summer visits Victor in jail. She voices her confusion over the case. He’s going over plan B and invites her to stick with him in court so she can hear the testimony and get perspective. He asks her to stay away from Luca.

At Crimson Lights, Chelsea asks if Adam regrets not taking the helm of Newman so Victor would already be in jail. Adam doesn’t have any regrets. They both feel that Adam’s finally free. Summer arrives to see Luca who is thankful she hasn’t turned her back on him. When she asks for the truth, he confesses that he ran to Victor with the truth when he overheard it. He claims it was to be fair. Marisa and Noah intervene and Noah asks what Luca was really after. Summer is texted that court’s back in session.

Victoria finds Billy drinking coffee at the Club. He tells her he wasn’t one of the instigators to throw her father’s case though he knew about it. She calls it reckless. They head back.

Friday’s Soapbox! Deconstructing Y&R: The end of an era

Back at the court, Christine lets Jack and Phyllis know they’re about to resume. She warns that Victor’s going to call Phyllis back on the stand. When court has resumed, Victor’s line of questioning makes Phyllis admit she had no problem working with Vic to take down Ian Ward. Jack’s on the stand and Victor calls what happened to Phyllis “alleged.” Jack says it was factual. Victor makes it appear as though he and Jack are very much alike. Summer gets on the stand and TGVN asks his granddaughter who the one person was that refused to give up on Phyllis during her coma. Summer admits it was Victor who found the doctor who saved her mom. When Abby gets on the stand, she cries during questioning. He breaks her and she apologizes for all of this. Nick’s next. Victor paints a picture that he has always been there for his son, that he provided for them all over the years. Nikki’s called and he brings up when they met and she was a stripper. She sighs. She’s forced to admit she loved him for taking her out of the strip joint and setting her up with a wonderful life. He lost sight of that and all that mattered to him was winning. He brings up her boozing and how he never turned his back on her. He claims to be able to smell vodka on her breath right now. “Damn you,” she whispers, tears in her eyes. Victoria goes up. She asks how he’ll twist her words. He gets her to admit her reasoning for ousting him from Newman. Adam is next and Victor talks about their turbulent relationship and wants the jury to see that they’re both ruthless. He starts yelling about blood being thicker than water, alcohol… Christine gives closing statements, telling the jury she knows that Victor tried manipulating them into feeling for him but she paints a picture of how he hurt those in this room. She asks them to convict this man who wrongly believes he’s above the law. In Victor’s closing statements he talks about stepping on toes. He tells the jury about growing up in an orphanage which is devoid of all feelings. He says it taught him to fight to survive. He weeps as he says everything he does he does for his family.

There are new spoilers up as of Friday in Soaps’ Y&R spoilers section.

In jail, Victoria says to her father, “I guess everything you said about loving me wasn’t true then.”

Jack yells at Phyllis that she’s consumed by this and pushing everyone away.